This trek was organized by YHAI, Bangalore. The plan was to trek from MM hills to Naagamale and to Gopinatham. My friend Ananth also joined me in this trek.

We started from Bangalore at 10:30 PM on Friday night. It would have been an uneventful journey till MM hills but for the driver who dozed off for a second while driving. It was on the hopeless stretch of Kollegal to Hanur at 3AM. The Tempo traveler which we were traveling went off the road and the front wheel went into a small ditch. Nothing major, but a small dent onthe front of the vehicle. The next one hour was spent on the efforts to bring the vehicle back on the road. People from other vehicle also helped. The journey started again at 4 and we reached MM hills at 7 in the morning.

We started the trek at 11AM, after obtaining the permissions from the forest department. The forest department charges exorbitant rates for the trek. The routes in this area were opened for trekking recently after Veerappan’s death. The trekking group will also be provided with a guide. Details: http://www.mysterytrails.com.

The first day of the trek was from MM hills to Naagamale. This route isdotted by a number of villages and a number of pilgrims visiting Naagamale temple. There are also a number of shops providing tea and some light snacks. We finished our packed lunch at one of such shop. 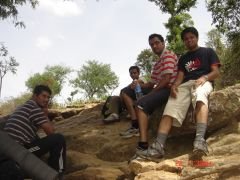 One of the stops on the way to Naagamale. 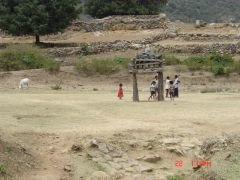 A village on the way to Naagamale 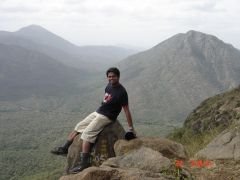 After lunch, we passed through a patch of forest which provided some nice views. The guide also told some of the violent activities committed by Veerappan. In this trek and journey, we came upon many places which had witnessed the human slaughter by Veerappan like beheading of DCF Srinivas, a place near Gopinatham where he killed 4 Police officers, blast near Palar which killed 22 policemen etc. It was very difficult to believe that these silent places had some of the bloodiest past.


We reached Naagamale at four in the evening and took one of the rooms provided by forest department. Naagamale is a small village that can only be reached by foot. Naagamale temple is on a hillock. 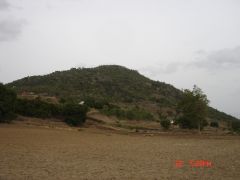 We decided to see the temple on next day. We spent time resting and collecting firewood for campfire. After dinner, we played Anthakshari. It was amazing to hear a good collections of Kannada songs from our organizer, Shashidhar. Also, couple of people who were on a pilgrimage to Naagamale temple added to the maasala by singing some songs on “Malai Mahadeshwara”. We also came to know about lot of things about Malai Mahadeshwara from these people. 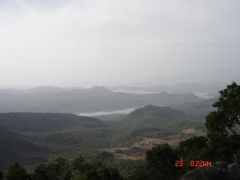 Next day morning, we went to Naagamale temple. Footwear is not allowed on the hillock where the temple is situated. There is also a watch tower on top of the hillock. We could see the backwaters of Mettur dam. 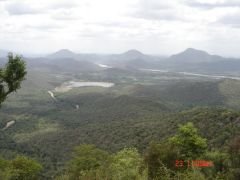 After the breakfast, we started our journey to Gopinatham. This was the toughest part of the trek. The trail was continuously downhill but the area was completely dry with no water sources along the path. It tested the stamina and patience of each team member. We also ran short of water. Finally, we reached Gopinatham at 3PM. We went to a hotel and emptied all the soft drinks in a few minutes. Finished our lunch and started our return journey to Bangalore. Pit stop was at MM hills to visit the Temple and Hanur for snacks. Reached Bangalore at 11PM.
For more photos, click here