6 - 7th January 2007
A Coffee or Lunch with Shakil will end up in a plan for a trek or a trip. The same happened while having lunch on 4th thursday. Shakil proposed for a trek during the weekend and the destination was immediately decided as Brahmagiri. This was accepted by all people at the lunch table and a group of five people (Myself, Shakil, Ananth, Malli and Srinivasa) got ready for the trek.
Brahmagiri is a peak in Kodagu district bordering Kerala. It is inside Brahmagiri forest reserve and permission from Srimangala forest Office is needed to trek this peak. The trek starts from Irpu falls. I called up the forest officer and made the reservation for the trek.
We started on Saturday morning on Shakil’s Ikon. We had planned to leave at 5 AM but it was 6 when we departed from the last pickup point at my place at Raja Rajeshwari Nagar. Typical to any early morning start!!
It was nice drive on the Mysore roads with very less traffic. We stopped at Maddur Tiffanis for breakfast. At Srirangapatna, we took the deviation towards Hunsur. At Hunsur, the signboard showed the route to Irpu via Nagarhole and we promptly followed. It turned to be painful, since the roads in the Nagarahole national forest was extremely bad. Only animals we spotted in Nagarahole were a few spotted deers. 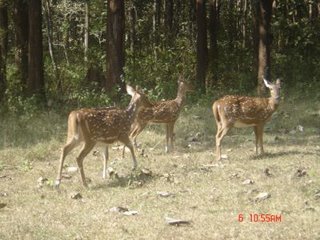 This painful journey continued till Srimangala and we were in front of the forest Office at 12 noon. The permission was obtained immediately and the Officer was very nice and helpful. The fees was Rs 150/- per head (includes forest entry fees, trekking fees and stay in their guest house at Narimale) + Rs 200/- for guide.
We then went to Irpu falls where we found our guide waiting for us. We finished our lunch at a local hotel and started our trek at 1 PM. The trail started from Irpu falls and after a few hundred meters, and then came the climb. The climb was not very steep, and the trail was through dense forests. After climbing for an hour, the trail became plain and we were passing through the shoulder of a hill with Lakshmana Theertha River on the left. 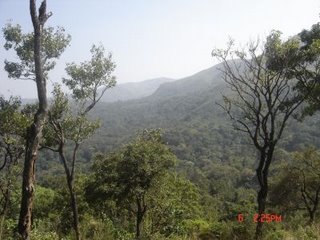 After about two hours of trekking, we hit the point where the river crossed the trail. We rested for half an hour. 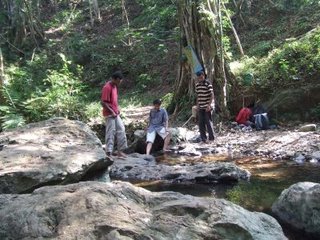 The remaining journey was a steep climb through grasslands and we reached the Narimale guest house at around 3:30PM. The guest house is nothing but a building inside a patch of forest, with very basic facilities. There were already two groups which had reached earlier and had occupied the two rooms. We had to adjust ourselves in the hall.

The guard then immediately asked us to start for Munikal caves. People wanted to rest for sometime, but, since the other gang was leaving, we too decided to start for the caves. Munikal caves are around 4 kms from Narimale guest house and the trail is almost through grasslands with no descent or climbing. Actually, we need to cross the Kerala border to see these caves, an even in these forest areas, the border is well drawn. 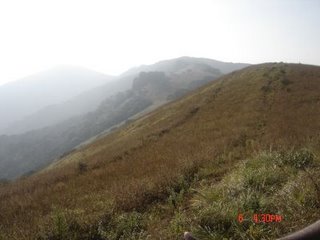 After walking for an hour, we were at the Munikal caves. They are also called as “Pakshipathalam” in Kerala. The caves were great. 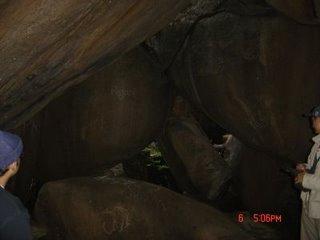 We then came back to guest house at 6 PM. On the way, we saw the elephants on the Narimale hill. Ananth was lost in the caves and came with the other gang, almost after dark.

We then started the process of cooking. The guest house had the facilities for cooking and we only needed to bring the fire wood from the surrounding forests.

Next day, we got up at 6, and after breakfast, started towards our main destination, Brahmagiri hill. Ananth and Srini decided to stay back taking some rest. The trail till the base of the hill was easy. We sighted a fox, some deers and bison along the way. We reached the base of the hill in an hour. The steep climb started then and some places, it was almost vertical. It took around 20 minutes to climb this last stretch. 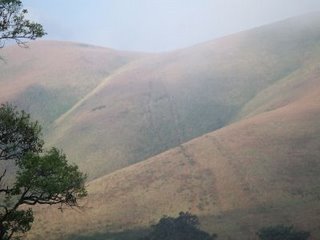 We could see the entire range of Brahmagiri and Wayanad from the peak. There was trail towards Kerala which ends at Thirunelly temple. The temple itself was visible from the top. The trek to Thirunelly temple is supposed to be more strenuous and it requires permission from the Kerala forest department. 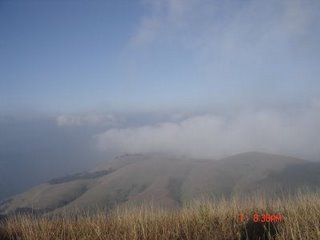 We took some snaps and started our descent. Our guide showed us a different path for climbing down, since the path we climbed was almost impossible to get down. We reached the guest house by 10:30AM and started the return journey towards Irpu falls at 11:30AM. It just took some 1.5 hours to reach the Irpu falls. The sight of Irpu falls; we dumped our entire luggage and plunged into the falls. It was a great relief after the trek. 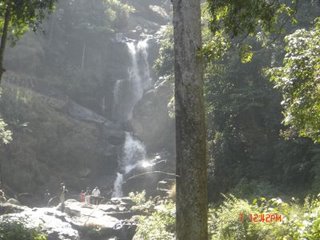 We then finished our lunch at the hotel in Irpu falls and started our return journey at 2:30PM. This time we took the route through Gonikoppal and the roads were much better.

Last year, I did only a couple of treks and this year I have decided to trek more frequently. I still have some 12 good places for a 2 day trek in Karnataka alone. Let me see how much I will be able to complete.