5th - 6th May, 2007
About Mudumalai: The wild life sanctuary in Tamilnadu which adjoins Bandipur in Karnataka. It is about 250 kms from Bangalore.
The plan was to spend relaxing 2 days at Mudumalai and spot some wild animals, if lucky. We booked Bear Mountain resorts at Masinagudi. Mudumalai boasts of a big list of resorts when compared to the neighboring Bandipur.
Four of us (Myself, Sankara, Ajay and Chitrai) started on Friday evening. After stops for tea at Maddur Tiffanis and dinner at Kamath Madhuvan at Mysore, we reached the resort at 11:30 in the night. We spotted a lot of deer and couple of elephants on our journey. Sad part was that we had to pay “entry fees” (bribe) at Tamilnadu just because we crossed at midnight. Any question would mean that our Car would be fully searched and unnecessary harassment. 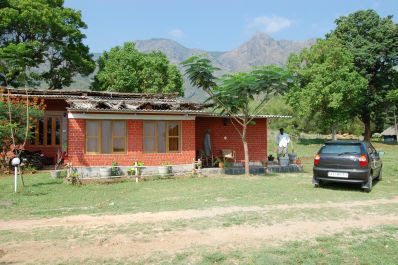 Saturday, we just relaxed. The resort was at the backdrop of some mountains and looked great. It rained in the evening, after which we decided to go for a Safari. The resort people organized it. But it turned out to be a total flop. These private resorts don’t have the permission to enter into the forests (which, we came to know later) and chances of spotting wild animals on the village roads is very bleak. It would be better to take safari organized by forest department at Teppakadu. 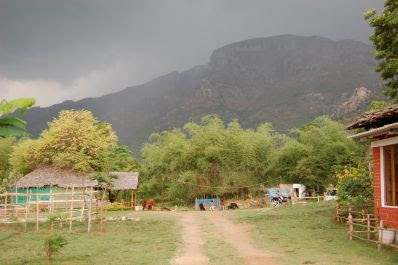 Sunday morning was spent by playing sometime in a nearby stream and playing cricket. We started off from the resort after lunch. We did spot a good number of wildlife in Bandipur.

These Langur monkeys actually posed for us!! 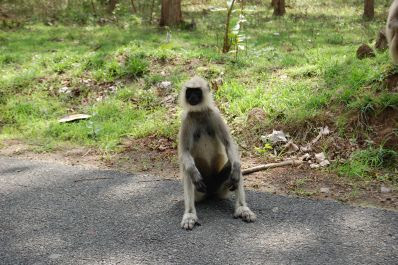 The spotted dear appeared brave and was not bothered by our presence. 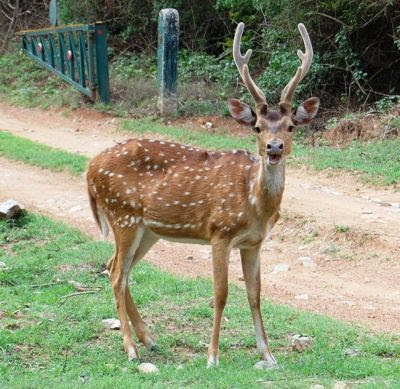 Then we found an elephant with only left tusk. He appeared mild and I took a photo from a very close distance. (Later, I heard that the elephant was quite infamous and has had some bad encounters with the tourists). 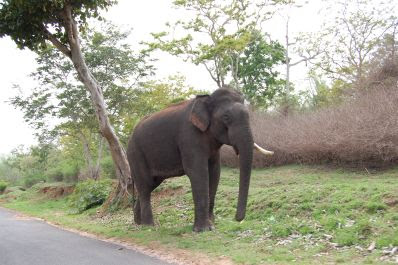 The next point was Gopala Swamy Betta. It is the highest point in Bandipur range and provides a panoramic view of the sanctuary. The place used to be normally deserted in my previous visits. But this time it was filled with tourists. There is a temple built by Cholas at the top.

The rest of the journey from Gopala Swamy Betta to Bangalore was uneventful with only busy Mysore-Bangalore traffic to watch.