9th - 10th June
This time the trip was to Valparai and top slip, situated in the Western Ghats near Pollachi.
Valparai: Valparai is the hill station in the Anamalai mountain range about 64 kms from Pollachi in Tamilnadu. It is a place which is not yet polluted by the influx of the tourists.
Top Slip: Top Slip is about 35 kms from Pollachi. It is the visitor centre for Anamalai wildlife sanctuary. Anamalai is one of the biggest wildlife sanctuaries in the country with some 900 Sq.kms of forest area. Top slip is also the gateway for adjoining Parambikulam sanctuary in Kerala.
Plan: Six of us (Myself, Sankara, Saran, Ajay, Malli and Abhijeet) had planned to stay a night at Top Slip and visit Valparai and Anamalai wildlife sanctuary. We called wild life warden at Pollachi, to book one of the guest houses at Top slip. We were promptly told that “all” the guest houses were booked for VIPs. Well, this is a problem at all Government controlled guest houses. Most of the times, they are booked for “VIPs”. Either one has to plan early by writing a letter and sending DD months in advance or have some “connections” with VIPs to get the rooms booked. Else, take a risk and directly go to the place where the Officials wait till the last second for any VIP’s before giving the room. We people had neither the flexibility of planning a trip in advance nor had any connection with VIP kind of people. Finally, we decided to stay at one of the lodges in Pollachi and cover Valparai and Top Slip. We booked train tickets (Thanks to “Tatkal”) to Coimbatore on Kuchuveli Express.
The Trip:
The journey started on Friday evening at 7PM. Myself, Sankara, Ajay and Malli boarded at Cantonment station while Saran and Abhijeet joined us at KR Puram. We reached Coimbatore at 2AM. Sankara had booked a Sumo for travel and it was ready for us at the railway station. We started towards Pollachi where we had planned to book the lodge. In another 45 minutes, we were at Pollachi. There was some movie shooting going on near Pollachi and all lodges were full. It might also be possible that they were skeptical to give room to strangers at 3 in the night. That was unfortunate and we had to think about alternatives. Driver suggested going to Udumalpet, a small town 30 kms from Pollachi. It meant an additional travel but we had no other option.
We were almost nearing Udumalpet, when Sankara remember some phone number of a hotel in Valparai. The response was again negative, but we got phone number of another hotel. This time we were lucky, the hotel guy said that there were rooms available for stay. We headed back to Pollachi and then towards Valparai. About 25 kms from Pollachi was Aliyar Dam and Monkey falls, but it was still dark and we decided to visit while coming back. After Aliyar Dam, the ghat road starts. This road has 40 hairpin bends. 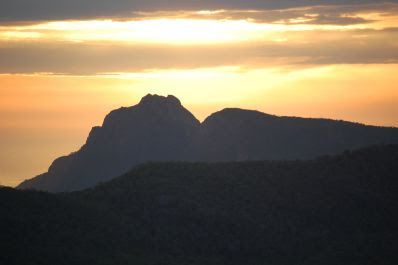 Initial part is though forests and we saw some “Nilgiri Thar”, a common animal in this area. The next part is through the tea estates and cool breeze refreshed us as we climbed up the ghats to Valparai. 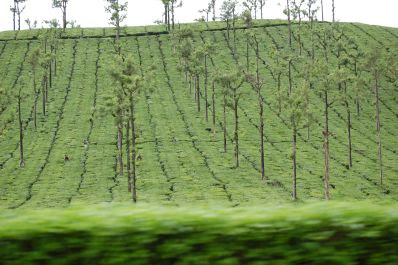 We reached Valparai at 7AM and checked-in to Krishna lodge. We took some rest for couple of hours.
The first destination was Athirapally waterfalls. There was confusion about the distance to this falls from Valparai. The website that I referred had mentioned the distance as 50kms. We started at 11AM. On the way, at about 20 kms,was Sholayar-1 dam. 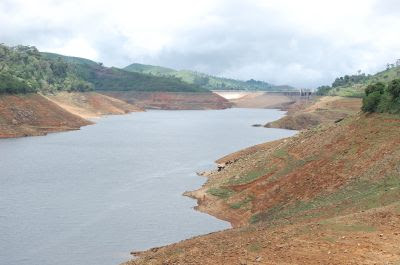 The Kerala border was next to the dam. After crossing Kerala check post, the road passed through the dense rain forest I had ever seen. The road was extremely narrow and was not in a good condition. There was not a soul or vehicle found for several kms. After one hour in the forest we came across Sholayar-2 Dam. This is was in the midst of the evergreen forest far away from Civilization. 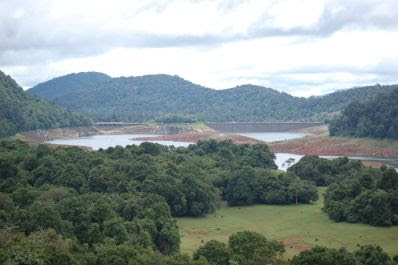 We continued our journey and the forest seemed never to end. There were some anxious moments where the vehicle had to navigate through some fallen trees. Elephant dung was everywhere.
Finally after some 2.5 hours in the forest, we reached another check post and in another five kms, we were at Athirapally falls. The total distance was 100 kms and we had taken nearly 4 hours to cover this distance. There is an alternate route from Pollachi though Palakkad and Chalakudy where the roads are in a very good shape.
After having late lunch in a local hotel, we went to the falls. There is nice pathway to the bottom of the falls. We then went to the top of the falls where lots of people were in water. We enjoyed the cool waters for some time. This falls is quite famous among movie circle and lot of films are shot here. 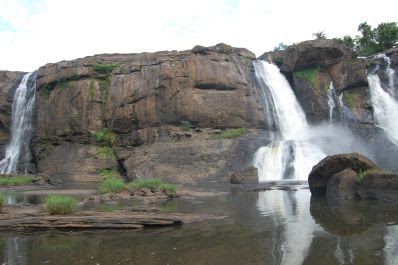 We started back from the falls at 5:15PM. We wanted to cover the most of the forest stretch before sunset as driving would be tough during dark. Somewhere in the middle, the skies opened up. The driver had a tough time in driving. The downpour continued till we reached Valparai at about 8:30PM. After dinner at a local hotel, we hit the bed.
At 8PM, next day, we started back towards Pollachi. On the way, I could take some pictures of Malabar squirrel and Nilgiri Langur. 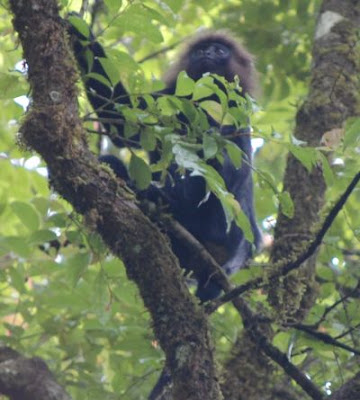 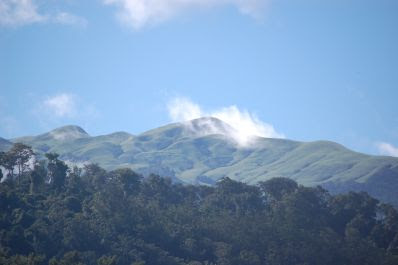 After getting down the ghat, we went to Monkey falls. As the name suggests, this place has lot of monkeys. The falls was dry and we did not waste any time there and headed towards Aliyar dam. This dam is in the plains and attracts lot of holidaying people. 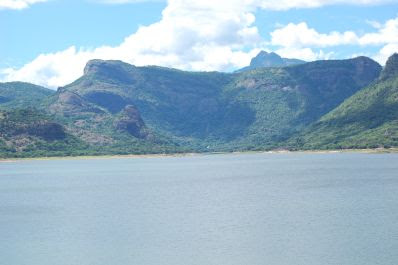 We then went towards Top Slip. Twelve kms before Top Slip was Sethumadi, where the entry tickets for the park is given. At about 11:30AM, we reached Top Slip. 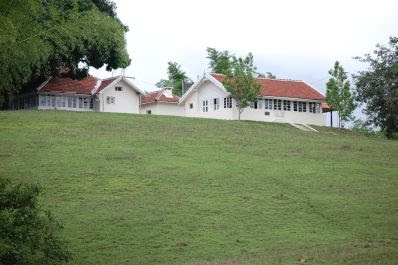 We went to information center and were told that the next Safari was at 2:30PM and the last one was at 5PM. There was also an option to go to Parambikulam that was just next to Top Slip. We had confusion where we need to go. This is the place which needed at least a couple of days to explore but we were in a hurry to cover everything like day tourists. We decided to go to Parambikulam. We were stopped at Kerala check post. There was a new rule to allow only 30 vehicles in the day and only one vehicle was allowed every 20 minutes. This was to reduce the pressure on wildlife due to excessive human intervention. The next available slot was only at 3:40PM. All our plans had gone for a toss. Confusion reigned on our minds and after a long discussion we decided to ditch the Top Slip Safari and go for Parambikulam in the evening.

We came back to Top Slip again and went to the only canteen there. The food was only served on prior order and the canteen guy was turning away all tourists saying that they should have made an order earlier. Even tea/Coffee is served only at certain time. This is ridiculous but that’s the way the Government works. Luckily our driver had told about this and we had called the canteen guy and had ordered for lunch. The food was simple and was OK.

We killed time till 3 and then started towards Parambikulam. We found that at the check post, the guard was allowing some vehicles to enter for bribe. The rule made for a genuine cause was being exploited by these forest guards. We crossed Kerala border and reached another check post. Here we were forced to take a guide. The guide was hopeless and never opened his mouth. We were also asked to return by 5:45PM. The time was very short and we decided to ditch the dam and go to “Kannimari”, which is the largest teak tree in the world. We did see a lot of wild life and the highlight was a pack of wild dogs that crossed the path. This was the first time I saw them in the forests. 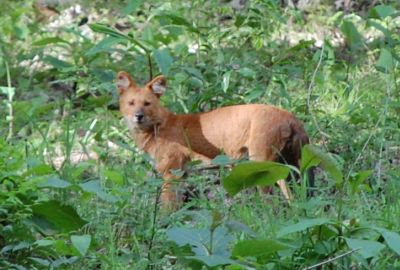 After Kannimari, we then reached a view point where we watched the panoramic view of Thoonakkadavu dam. 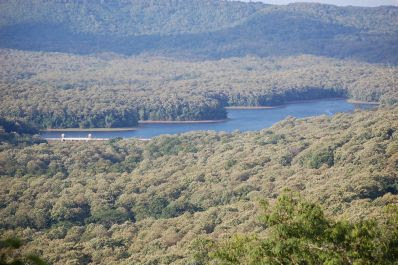 I also heard that there is a jeep (or tram??) path from Chalakudy to Parambikulam where the forest was thicker than the one between Athirapally and Valparai.

It was then time to head back. The Anamalai hills started to fade away in the background as we moved towards Pollachi. We boarded the train at 11:45PM from Coimbatore after having dinner at “Hotel Annapurna”, one of the best in Tamilnadu.

Valparai:
It would be better if one spends at least 2 days in Valparai. Athirapally falls and nearby places can be covered in a day. The second day can be spent in Akkamalai (Grass hills), but needs permission. I could not get much information where to get permission. One can contact Principal Chief Conservator of Forests and Chief Wildlife Warden, Panagal Building, 1, Jeenis Road, Saidapet, Chennai - 600015. Ph no: 044-4321738. They will at least give direction to obtain permissions.

Top Slip and Parambikulam:
One has to stay for at least two days to really enjoy the beauty of these places. Both the places have guest houses, but guest houses and cottages in Parambikulam are in a more isolated and scenic location.

For accommodation at Top Slip contact, Department of Forestry in Pollachi (Wildlife Warden Office, 178 Meenkarai Road, in Pollachi, Ph: 04259-225356)
For Parambikulam, Accommodation can be reserved through the Range Officer, Thoonakkadavu. (Ph: 04253 – 277250)