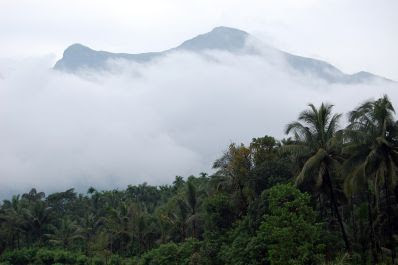 We reached Didupe at 9:30AM. It is a picturesque village surrounded by mountains. An unknown waterfall could also be seen from a very long distance. From Didupe, there is a mud road that leads to the falls. We parked our car near the ground and started walking on the mud road. After covering about 3 km on the mud road, we reached an entrance of a private plantation. At the plantation, a local person from a house guided us to the falls.

As we were going through the plantation, we could see a falls somewhere high up the hills. When asked, the local guy told that the same Anadka stream forms another falls in the upstream and it is possible to trek up to that point after the end of monsoon season. That would be an interesting trek. We then crossed the stream and he showed us the easy route to reach the base of the Anadka falls. 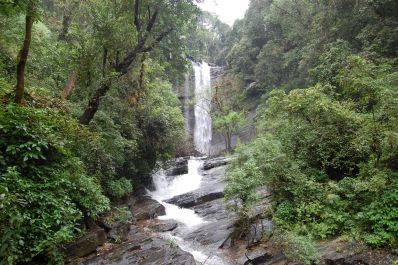 It is a single step falls and the view is fantastic. It is a falls where one can easily take bath and play in the water. The falls is also known as “Kudumagundi” falls. We spent some time in taking snaps and playing in the water. 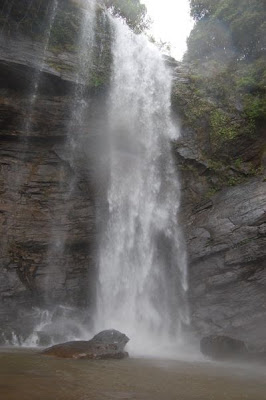 We came back to Didupe and started back. The next point was Ermayee falls. If one starts from Didupe to Mundaje, after Kajur, a mud road goes to the left that leads to the falls. When we reached the junction, it started raining heavily. I went to the lone house next to the road to get an umbrella. The owner of the house was a very helpful gentleman. He asked us to park our vehicle in his compound, as there were some thefts earlier in the vehicles that were parked on the main road.

The falls is just 1km walk from the main road. We had to cross a stream on the way and reached Deviah Gowda’s house. One has to go through their plantation for 5 minutes to reach the falls. We took permission to enter into their property and went to the falls.

It is a two-step falls and is in complete isolation. Two days ago, I did not even know that this falls exists and now I was in front it enjoying the waters. Shivarjakumar’s “Chigurida Kanasu” was shot in this falls. 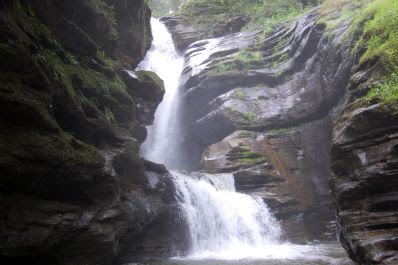 It was 3PM when we came back from the falls and now we remembered that we did not had lunch. We went to Mundaje, had late lunch at Sharanya hotel and started our return journey to Bangalore. This time there was no block in Charmadi ghat, but the continuous rains till Bangalore slowed the journey. It was almost midnight when we reached Bangalore.

It would take several weekends to cover some of the prominent places in the Charmadi area and there will be some more trips to this beautiful place.

Unfortunately, Anadka falls is in Kudremukh National forest. Forest department has erected a board at Didupe mentioning that permission is needed to visit the falls. We were not aware of that and on the way to the falls, from a house named “GOWDA”, a person suddenly appeared and said that he was a forest guard and was on an inspection. There was no check-post and I don’t know what he was doing in that house. He told that without permission, one couldn’t go to the falls. The permission has to be obtained at Beltangadi only. This was news to me, as in the forest department website, I had not seen any mention of this falls. 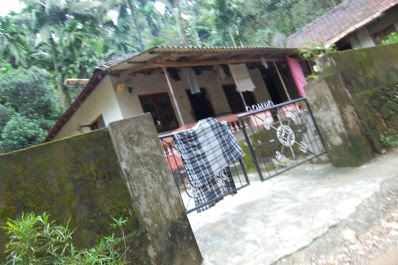 He asked us either to get permission from Beltangadi forest Officer or pay the forest entry fees to him and go to falls. Even though he told that he was a forest guard, he was not on dress nor had an ID card. On top of that he said that he cannot give any receipts to us, but he said that he would pay the amount in Beltangadi forest Office. His name was Ravindra (that’s what he told). Frankly speaking I did not like that person. He looked more like a Panchayat member than a forest guard. But then, we could not ignore him and go to the falls. If he were a real forest guard we would be in trouble. Finally after discussing among ourselves, we paid the money. Whether he was a forest guard or not, he made money from us.