Kumara Parvatha (KP for trekkers), is supposed to be the toughest trekking spot in Karnataka. It beckons the adventurous people from all over Karnataka. For a trekker in Karnataka, his trekking life is considered incomplete without a stamp on KP.

November 22-23rd of 2003 saw me at KP for the first time. My trek and travel life started with that climb. Seven of us (I, Chandan, Krishna, Nama, Rohith, Sankey and Yogesh) trekked to KP from Kukke Subramanya side.

The first stage of the trek from Kukke to Bhattara Mane itself was too much for us. We were sweating profusely within minutes of climbing. This initial stretch was through dense forests but the steep climb took toll on all of us. Finally, we were relieved when we saw Bhattara Mane. 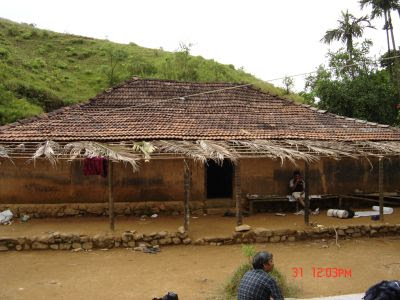 After lunch and rest for an hour, we started towards our destination. The forest cover was no more and we were directly exposed to the merciless sun. The next point was Mantapa, a partially ruined structure. There is a stream flowing nearby and forms the camping place for most of the trekkers. Eventually, many return back from Mantapa, adding to the people who couldn’t make a mark on KP. 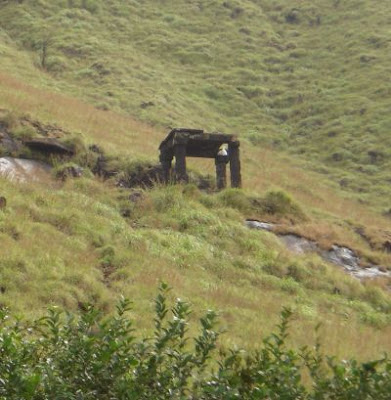 We were a tired lot when we hit Mantapa. We took lot of rest and had plentiful of water. Another gang who had started ahead of us had decided to camp at Mantapa. Camping there was attractive; it would shun us from counting tiring journey, at least for a day. But still we firmly held to our earlier decision that we need to camp at the top and trudged upwards. From Mantapa, the climb was extremely steep. We were already dead tired and progress was hopelessly slow. Every two minutes of walk would result in ten minutes of rest. 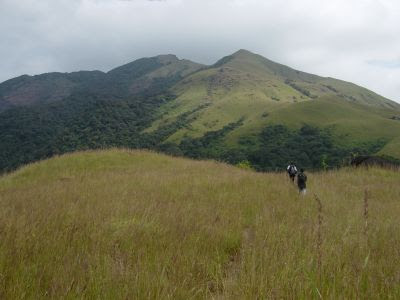 Kumara Parvatha itself is not visible while trekking. We would climb a peak hoping that it is KP but there would be one more higher than that. The sun was setting down when we reached KP or so we thought. Actually we were on Shesha Parvatha. Kumara Parvatha remains elusive until you climb Shesha Parvatha. Our spirits lowed down when we saw the gigantic peak, which was the real KP. We had to cross a forest patch and climb a huge rock to reach KP top. We resigned to the fact we had to wait for KP, at least for a night. 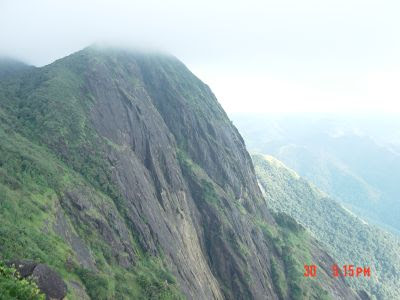 Camping at Shesha Parvatha was ruled out; the blowing wind would easily throw us out. We found a spot next to the forest. The night was windy; the worst thing was that the wind blew from all directions. With no sleeping bags or tents, we spent a very long night. Getting down to Mantapa after sunrise was on everyone’s mind.

But the next morning, we were the enthusiastic people ready for the final climb. It took us less than an hour to reach the top. From KP, one can see the endless landscape of Dakshina Kannada and Kodagu districts. There is also a small temple is at the top. 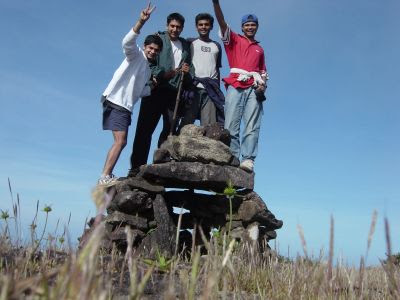 A year had passed since then. We had done many treks to different places but memories of KP were etched on our minds. Another trip to KP was planned during the long weekend of 30-31st of October 2004. This time the climb was from Somvarpet side.
This time the team members were: Aravind, Chandan, Krishna, Avinash, Rithesh, Bori, Niranjan and Prasanna.

The trek starts from a village Bidalli, 25 kms from Somvarpet. The path crosses a stream and passes through Hegade Mane village, Shanta Malleshwara Temple to reach a forest check post. After check post, the trek is through one of the dense evergreen forests. 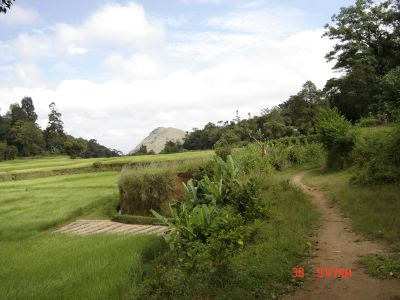 The trek from forest check-post was not arduous, but the leeches made our life difficult. The monsoon was still active and the leeches were plenty. The only way of escaping them was to run, run and run. It was even hard to spot a place to have lunch. The important landmark on this path is a vista point 2 hours from check-post.

Shortly after the vista point the path splits into two. The left path directly takes to KP and the other joins the Kukke-KP route somewhere between Mantapa and Shesha Parvatha. We took the direct path and our difficulties increased further. The huge rocks had to be climbed and were extremely slippery. With great difficulty we climbed the first rock and immediately we were at the base of a second one which was some 150 ft high. This rock presented more challenges than the previous one. Few of us managed to climb this monster, but could not find any path further. The thick undergrowth after rains had successfully covered the path. Efforts to find the path proved futile. We had reached a dead end and the next option was to retrace back and take the other path from the junction. Commotion broke out and the first timers panicked, with few of them blamed the navigator (Me!!) for not knowing the route and putting them to hardships. Well, trekking is not a mock drill where everything goes according to the plan. 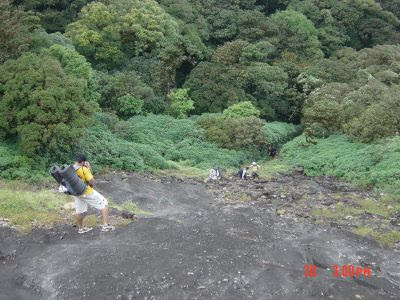 We climbed down the rocks to reach the junction and took the other route. Even in this route, the path was covered by undergrowth and it took quite a while to find the way. Our joy knew no bounds when we came out of the forest cover to reach the Kukke-KP route and by sunset, we were at Shesha Parvatha. The entire area was covered with mist and visibility was reduced to a few feet. We camped in the forest patch between KP and Shesha Parvatha. It rained during night and with only sleeping bags, we had to face it for the entire night. It was a festival time for KP leeches, with hapless trekkers caught during sleep.

We survived that night (with leech bites of course). The visibility was extremely poor. But since some of us had trekked on this path a year before, we did not face any difficulty in reaching the KP top. Climbing leech rock was tricky. 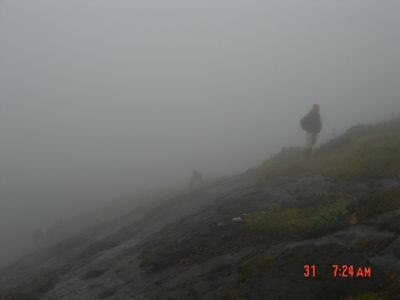 The third trip to KP was even more eventful. A moonlight trek was planned on 11-12th of February 2006. Naga has written a fantastic travelogue about that trek and can be read here.

I thought that the KP trips were over but not so. This year, Chandan had planned a KP mania. The plan was simple. Four times to KP in a row!!

I could only join for the second one. This time KP was a cake walk. The huge rocks on the way did not pose any challenge this time and we were at KP by 2 in the afternoon!!