26 January 2008
About Dudhsagar falls:
Dudhsagar is a waterfall in the Karnataka Goa border. It is on the train route connecting Londa in Karnataka to Vasco in Goa. It can be approached either from Kulem in Goa or from Castle Rock in Karnataka.

YHAI Bangalore had organized a trek to Dudhsagar water falls. The plan was to trek to the falls from Castle Rock railway station in Karnataka. I was thinking about this falls for a long time, so decided to join the trek.

Fourteen of us(Aravind, Chandru, Hemanth, Jawahar, Naman, Neetha, Padmaja, Pavan, Rajesh, Sanjay, Sanjitha, Srinivas, Swetha, Vani) started from Bangalore on Friday evening on a Tempo Traveler. It was a tiring journey, one reason was the long distance to Castle Rock from Bangalore and other was the incomplete stretch of Golden Quadrilateral from Chitradurga to Haveri. I could not get much sleep till we crossed Haveri sometime after midnight.

We were in Castle Rock railway station at 8 in the morning. It is a very small town and only residents of the town were the families of railway employees. When we reached the town, railway employees and students had just hoisted National flag on occasion of Republic day and were distributing sweets. Srinivas, from YHAI Sandur joined us here. 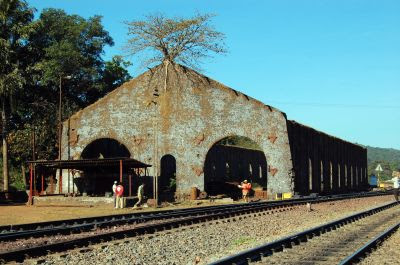 After having our breakfast, we started our trek at 9:30AM. We were bit unsure of the distance from Castle Rock to Dudhsagar falls. We asked different people in the station and the answer varied from 12 kms to 22 kms.

The Brazanga ghat track starts from Castle Rock. The distances were properly marked all along the route. The Castle Rock station was marked at 25/000. Within few minutes we were walking on the tracks surrounded by dense forests. It brought back my memories of similar trek done on the Sakleshpur ghat. But unlike Sakleshpur track we were not alone here. This is a busy route with many trains running and we could find trolley men all along the route. Also, the bridges and tunnels are not scary while there were lot of "killer" bridges in Sakleshpur track. 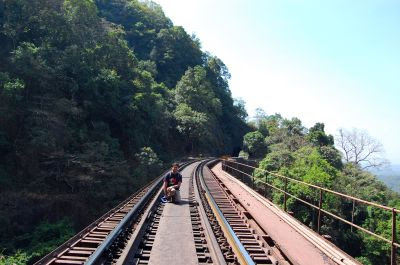 We found a nice little waterfall next to the track. That was after the second tunnel. Chennai Vasco train passed at that point. 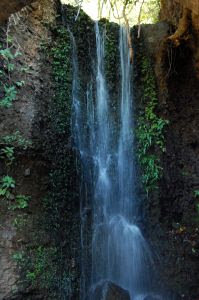 After five km of walking (at 29/900) just before the fourth tunnel, we crossed into Goa.

In another 30 minutes, we reached Caranzol railway station (31/200). A goods train was waiting for signal at this station. The station master told that a train was expected shortly and we could take that train to Dudhsagar. When we said that we had come to walk along the track, he told us that we were crazy. But anyway, he was a nice gentleman and told us that we need to walk another 8 km for the falls. 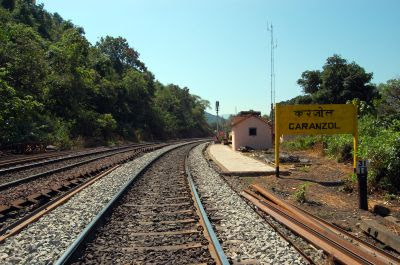 We resumed our walking after resting for 30 minutes in the station. We had walked for couple of kms, Amaravathi express passed ahead of us. We could see the train passing through tunnels and bridges for a long distance. 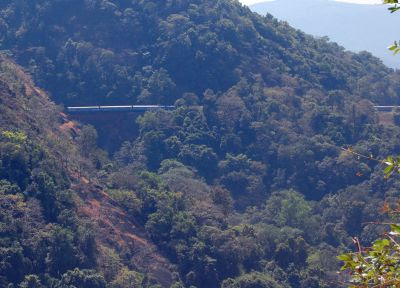 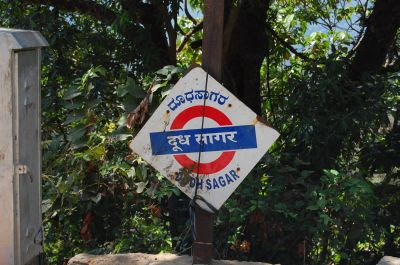 The falls was still one more km downwards. We crossed tunnel 11, which was the last tunnel before the falls. We could see Dudhsagar falls immediately after crossing the tunnel. 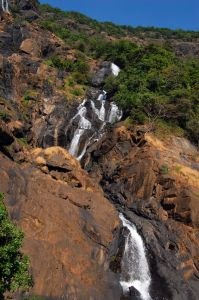 Dudhsagar falls is exactly at 39/000 marking, we had trekked for 14 kms from Castle Rock. The view of the falls came as a relief to us. The railway bridge passes through the middle of the falls. The amount of water was less but is expected at this time of the year. The falls had formed a small pool at the base which was an ideal place for swimming. 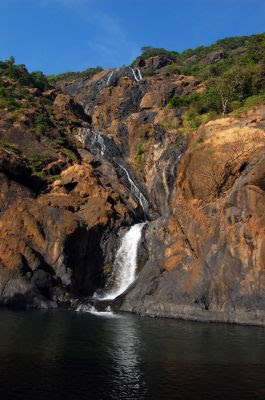 There was lot of people near the falls. We were the only ones who had taken the trouble of walking while others had either come on train or Jeep (available from Goa side). We could see lot of foreigners at the base of the falls below the railway bridge. 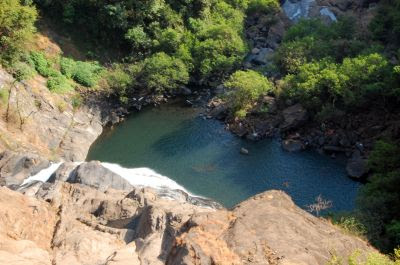 Few people in our group attempted climbing to the top of the falls. It was quite scary on the rocks and I did not even think of trying it.

We had our lunch at the falls and by 4:30PM started our return journey. This time we decided to board the train at Dudhsagar railway station. The Vasco Nizamuddin train arrived at 5:30PM. We boarded the train but without tickets!! Trains officially do not stop at Dudhsagar railway station and tickets are not issued there. The guard at the station had told us not to worry about the tickets. We faced some anxious moments when TC came to us but were relived when he ignored us!! The return journey to Castle Rock just took 30 minutes. 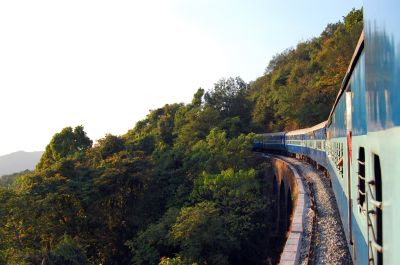 Castle Rock is a difficult place to reach. From Bangalore, trains going to Vasco stops at Castle Rock railway station. There are no buses to Castle Rock. Buses stop at the Castle Rock deviation on NH 4A (Belgaum to Goa route) after the small town of Ramnagar. From here the railway station is 6 kms.