26 December 2007
Devagiri (new name is Daulatabad) fort is 16 kms from Aurangabad and 11 kms from Ellora. It was already 4:30 in the evening when we reached Devagiri. I had seen many forts earlier. The feeling was that Devagiri is just one more of them. Well, I had to change my opinion shortly.

The guide describing the fort was very powerful in his explanations. Within minutes, I was extremely interested in the fort. This was no ordinary fort; the techniques used in the fort were extraordinary.

This fort was built by Yadava rulers who were kings of Deccan during 10th century.

The fort was built on a conical hill. The wall was solid and could not be broken by any weapons at that time. 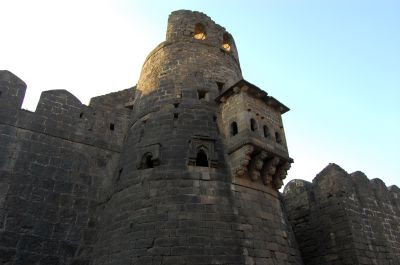 There are nearly 53 doors to the fort, out of these only 7 actually led to the top. The rest are all “pseudo doors” meant to confuse the enemy. For an outsider, these “pseudo doors” look like the main ones. Upon breaking the door, one would just see a wall behind it, thus totally demoralizing the enemy. 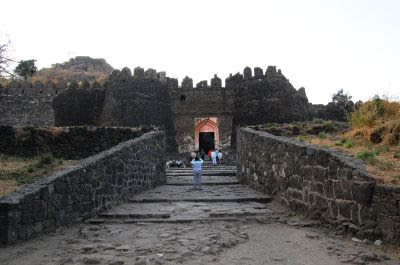 The doors were built of strong wood. In those days, elephants were used to break the doors of the fort. But to break the door, elephants need momentum and need to run for at least 600ft. But the doors and path leading to the door are designed in such a way that it is not possible to gain momentum for the animal. 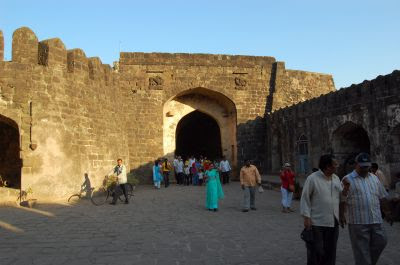 The doors also had pointed iron rods smeared with poison, so that the people or the animal pushing the doors would die. 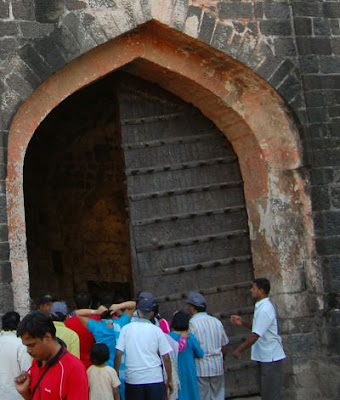 If the enemy is able to overcome all these defense lines, he would have to face the next level of defense line. A huge trench separates the fort from outer boundaries. This 70+ feet moat was filled with water with crocodiles in those days. There is a new bridge now, but in those days, there was a narrow leather bridge where the attacker would be at the mercy of the soldiers guarding the fort. 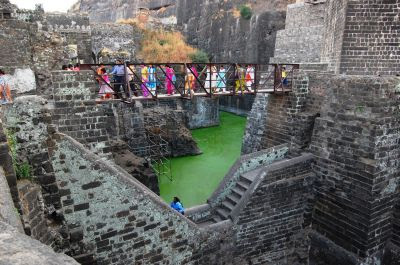 After the moat is the great “bhul bhullaiya” (Maze) and is a dark corridor that leads to the higher levels of the fort. There are man traps here where the enemy would directly slip into the trench. There were gratings at the exit where hot oil used to be poured on the enemy exiting out of the tunnel. Now, there are steps to climb bypassing tunnel. But with the help of the guides, we went through the tunnel. It was amazing to walk in the tunnel. 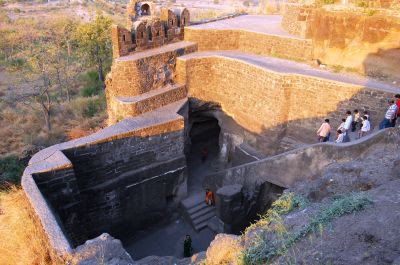 For the invaders who would have been tired after traveling for 1100kms from Delhi for months, it would be a daunting task to break the fort. It would be impossible to win the fort. Historians agree that it was the most impregnable fort in the World during its time. 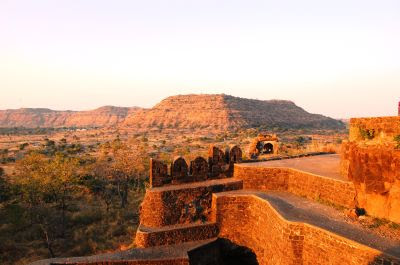 But history has proved otherwise. It is shameful that the Yadavas did not even give a decent fight to the invading armies. The so called great rulers of India fell down like a pack of cards. Some of the reasons were:

The only kingdom in India that stood against these invaders was Vijayanagar Empire, according to Robert Swell, a great Historian, in his book “A Forgotten Empire Vijayanagar”.

After the defeat of Yadavas, the fort was taken by Tughluq. History remembers him as one of the most hopeless King. He unsuccessfully moved the capital of India from Delhi to Devagiri along with its population. He renamed Devagiri to Daulatabad. After him, the fort was taken by Bahamani kindom. Ala-ud-din Bahamani built 210ft Chand Minar, in 1445. 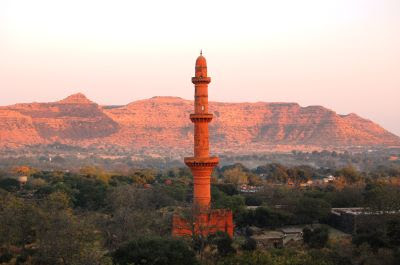 After the fall of Bahamani kingdom, the fort was ruled by Mughals, Marathas and Hyderabad Nizams. Aurangazeb was specifically intersted in this fort and had kept lot of prisoners including Sambaji, son of Shivaji here. The fort lost its importance after Mughals.

It takes some 3-4 hours to see the fort and is a “must to see” for any person interested in history. The fort represents the golden age of India, gone long ago.