I was on my feet again!! It was a trek to Mukurthi peak in Nilgiris. Getting permission to trek in Nilgiri area is not an easy task for individuals. When YHAI announced the trek, I promptly joined them.

Things did not look great on Saturday morning. We were at the forest Office in Ooty. To trek to Mukurthi peak, one has to stay in fishing hut maintained by Nilgiris Wildlife Association (NGO or Government funded Organization??). The forest around the fishing hut comes under Nilgiri North division and the route to reach that area by Nilgiri South division. It means that to trek to Mukurthi peak permission has to be obtained from all three departments. One can understand the mess that Government Offices create in such a scenario. Luckily all departments were at a single location in Ooty and not in different parts of the world.

Fishing Hut was booked over phone and Nilgiri association guys asked to come to Ooty. They said that getting other permissions was cakewalk. Situation was different at ground zero. Even though booking was made for Fishing Hut well in advance, it was also allotted for some “life time” members. In addition to that they put the onus of obtaining the permission on us. Getting permission was not easy. There were only watchmen at Forest Office and all “Responsible people” were either on leave or still “Not yet come for work”. It looked like we would end up in Ooty sightseeing. We blasted the association for creating such a mess. Things started moving then; it looked like they acknowledged that they had bungled up. Lot of talking among themselves and numerous phone calls and finally they said that we could go ahead for trekking. We would have to adjust ourselves in only one room at fishing hut. A person was arranged to guide us.

It was exactly 12 noon when we finally left Ooty. We were surprised when guide started to ask for directions to Mukurthi. He was coming for the first time he told!! “Real” guides would join us at Fishing Hut. On the outskirts of Ooty, we passed through the dumping yard. The journey further was on country side with very nice views. After traveling for an hour, we reached Porthmund Dam. Restricted area starts from this point. The tarred road changed to a Jeep track while it entered down the valley. We passed through a check post and a small bridge on a rock bed. Then it was a steep climb though series of hair pin bends. The road was narrow and filled with stones. The Tempo Traveller could not move up with the passengers. So, we got down and started walking while Tempo Traveller started moving further with our luggage.

The weather was cloudy and it was a pleasant walk. Only issue was that we were hungry, and our packed lunch was in TT. We walked for nearly 45 minutes and found our TT parked on the road. A tree had fallen on the road and the TT could not move further. It was an opportunity for us to have lunch while Chandru, driver and guide went towards fishing hut to get some help. Even after finishing our lunch, there are no sign of the people who went to fishing hut. It seemed like end of road for the Tempo Traveller. So, we took our luggage from TT and started walking towards fishing hut. Another 20 minutes walk, we were in fishing hut. Guide had found an axe and went with driver to cut the fallen tree. 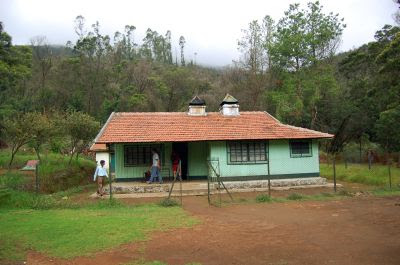 Fishing hut is a simple building built by some British person amidst dense forests. Mukurthi Lake is just in front of the hut. The drizzling had turned into heavy rain by the time we reached fishing hut. Tempo Traveller arrived an hour laterEvening was spent at Mukurthi Lake. Rains, mist and mountains had given a completely different look for the entire area. Lot of photos was taken as we walked on the side of the lake. 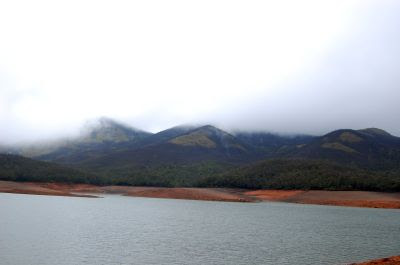 This place registers sub zero temperature during winter. Needless to say, it became very cold after the sunset. Campfire was ruled out as it was raining. Fire was set up at the fireplace in the hall. Guides took care of preparing our dinner. By 9PM, almost everybody had hit the beds.

Next day started at 5AM. Our main task of climbing Mukurthi had to be achieved. Heavy rains would have spoiled all our plans. Luckily it was just a drizzle and weather promised to improve during the course of the day. After having early breakfast, we started our walk at 6:45AM. The initial stretch was on a Jeep track. The entire path was covered by fallen trees due to recent rains. We had to crawl and climb these fallen trees to make our way. 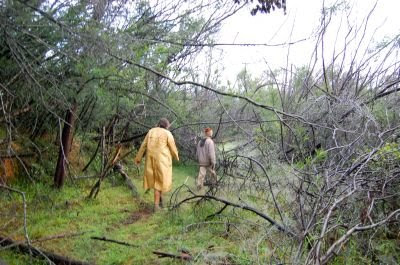 After half an hour, we were at Mukurthi Lake. The route was on the side of the lake with full view of Majestic Mountains and grasslands towards our right. Mukurthi peak was visible all along the way. We spotted some Nilgiri Tahr grazing on top of a mountain. 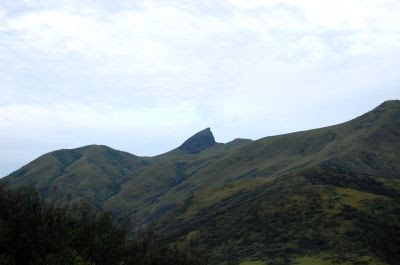 One hour from fishing hut, we were at the point where a stream joins the lake. Till now, the trek was only on the plains. The route from here to peak is continuously upwards. We rested at the stream for few moments enjoying the beauty of the nature that was befallen in front of our eyes. 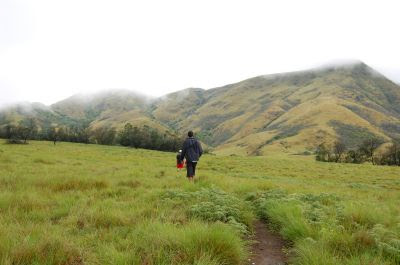 As we started to climb from the stream, the scenery was even better. I could spot some five waterfalls at different directions. At this time, entire area was covered by clouds and visibility was reduced to a few feet. 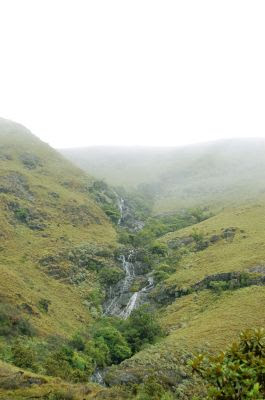 The final stretch was quite steep with zigzag path. We were climbing from other side of the peak. At 9AM, we were on top of the peak. The area on top was very less and was just enough for our group of 15 people. A small temple was also present at the top. Other side of the peak is a perpendicular drop. The wind was blowing fast and we felt that we could be thrown away. Entire area was engulfed by the mist. Else, we could have enjoyed the beautiful scenery from the top. 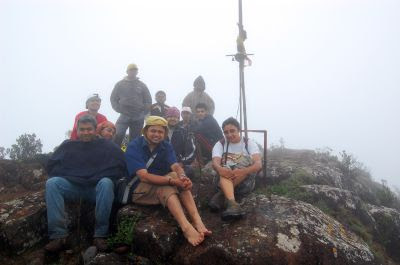 We had some photo sessions and turned back. Within an hour, we were at the stream. Since there was time to relax at the stream, I went in search of a waterfall that I had seen while getting down the peak. It looked very near, but I had to climb couple of small hills on the grasslands to reach the falls. 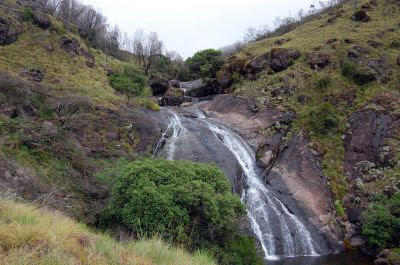 We were at fishing by 12 noon. We had our lunch and started our return journey at 2PM. Since the TT could not take all people in the group, few of us walked back towards the check post. Guide showed us a short cut, and it was rewarding as the route went on the Porthmund Dam. The location was very scenic but the sad part was that all of us had kept our cameras in TT.

More photos of the trek can be viewed here.