9th August 2008
The plan for this trip was very simple. Drive down through Kuduremukha ghat and come back via Charmadi/Shiradi ghat. The great part of this trip was the rains that kept lashing for the entire journey.

Regarding Yelaneeru, I came to know about this place from Rajesh Naik, a seasoned trekker of Western Ghats. Yelaneeru means “Tender coconut” in English. The name caught me and I was always eager to see this small village. 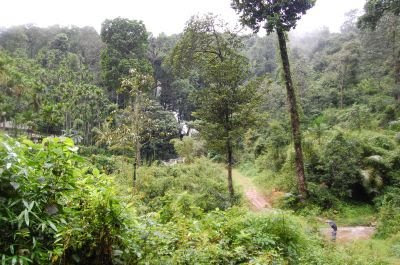 We started quite early from Bengaluru on Sankara’s car, lunch was at Kalasa and then we set out for our first spot of the day Yelaneeru. A deviation from the main road at Samse on Kalasa-Kuduremukha road leads to Yelaneeru. The initial stretch of tar road turned to a mud road. At one point, we thought it would be too much for the car to handle the road and we promptly parked the vehicle and started walking. 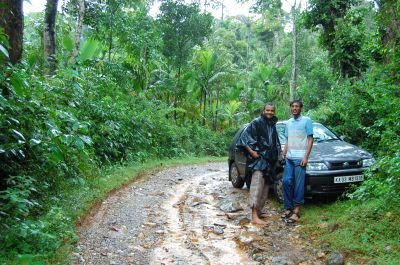 The road continuously goes through series of hairpin bends and then leads down to the village. Yelaneeru village is in a valley surrounded by mountains with two beautiful waterfalls. As soon as we get down the valley and just before the first house is Mavinasasi falls. This falls is just next to the road. 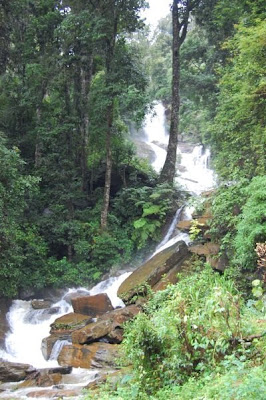 A villager passed at that time, and I enquired about the other falls, Badamane Abbi falls. He showed us at the opposite hill where we could faintly see a white line covered by trees. Badamane Abbi falls is a single step falls, where after the first step, water cascades down through several steps, crosses the road and finally makes a small jump before joining the Mavinasasi stream. To view the first step of the falls, one has to climb the steep hill for 15 minutes. 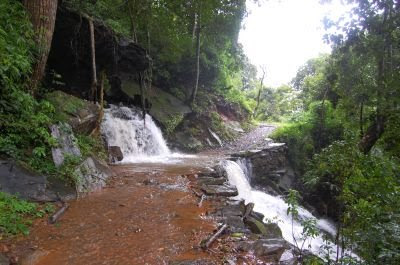 The villager told that it would be a tough task to climb the hill during monsoon. It was raining heavily and the path would be slippery. But he volunteered to show us the path to the top. We walked for couple of minutes on the road and just before the point where the stream crosses the road was a small path.

The path was indeed very slippery, but since we were climbing up we managed to ascend. Within ten minutes I was at the top where I could see the side of the falls. By this time leeches were all over my legs. I hurriedly took couple of snaps and started moving downward. Leeches deterred me from further exploring the place. 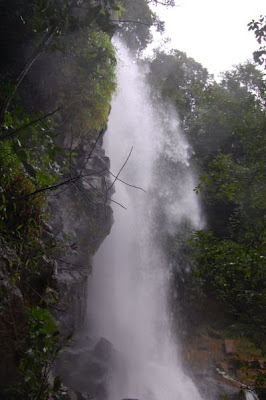 Problem started while climbing down. I cannot describe anything but my body was not in control. Mindlessly, we had climbed up without even thinking on how to descend. The pathway was so slippery; I fell down and started skidding downwards. With nothing to support, I scrambled to get hold of something. I could halt at some place, but I knew that moment I leave that spot I would be skidding again. Hoping that I could manage better with bare foot, I removed my slipper. Nothing improved and with no control, I started falling down. My clothes, raincoat and even my camera bag were covered by mud. But luckily, I had no injuries.

Even Sankara and Malli were in same situation. After coming down, we spent a good amount of time in cleaning ourselves and also taking out the leeches. They were all over our bodies and had a nice time. It was an experience to remember for long. 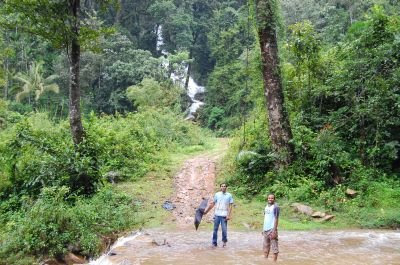 One thing that strikes in Yelaneeru is silent atmosphere with the only sound of waterfalls. For a visitor who just sees the falls and return back, this place would like a heaven. But if one gets confidence of villager, he would tell the issues that they face daily. 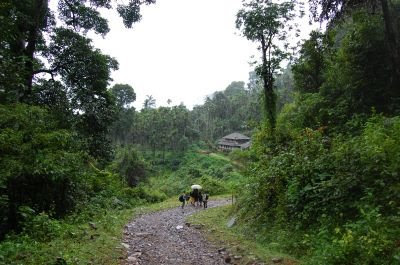 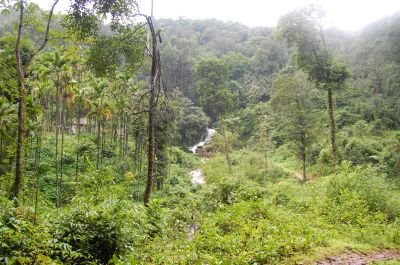 I knew this before but now I was hearing from the villager himself. To make things complicated Naxals are trying to fish in troubled waters. There are reports that they have caught some fishes in the village!! It is a delicate issue. Today, if villagers are allowed to take the road through National forest, there would be similar demands from other people as well. A small Jeep track would eventually turn into a tarred one and may be widened for Lorries and buses. An example for this is the National Highway connecting Sringeri to South Canara which passes through Kuduremukha National forest.

There is another waterfalls called Bangrebail 7 km from Yelaneeru inside Kuduremukha National forest. Post monsoon would be an ideal time to visit that falls, provided if there are no hassles from Forest Department side.