14th August 2004, 24-25th September 2005
This is the railway track trek from Sakleshpur to Subramanya road. The track passes in dense forests of Western Ghats through numerous tunnels and bridges. On the way there are small stations like Donigal, Yedakumeri and Siribagilu. The most popular stretch among trekkers is the Donigal – Yedakumeri route while few people would also extend it to Siribagilu and very rarely people cover the entire stretch. 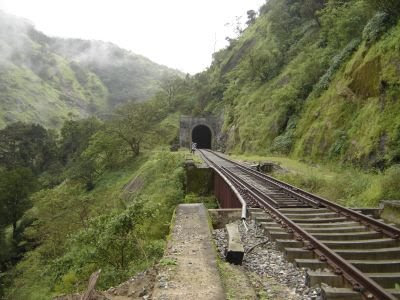 It was a meter gauge route and when I was a child I used to hear stories about the trains being stopped by elephants. I read Purnachandra Tejaswi’s novel “Jugari cross” during high school where the story revolves round this railway route. All these things fantasized me about this place to a great extent. 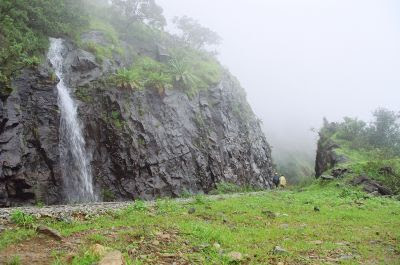 In early 90’s, the train services were stopped to replace the track to broad gauge. Due to apathy from several Government agencies, the work never started. The track was regarded as an abandoned track and became a hotspot for trekkers. 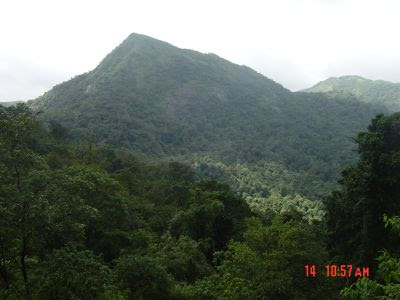 It was during 2004 that I seriously thought about trekking to this place. I had trekked to few places by that time. So, during August of 2004, a plan was prepared to trek from Donigal to Siribagilu. I roped in couple of my gullible friends who had very little idea about trekking. Needless to say, it was their first trekking.

On 14th of August 2004, three of us got down at Donigal in Bengaluru-Mangalore road. There was still 2 hours for sunrise and we killed time in the lone hotel there. For railway station, we had to walk for couple of km on highway and then take a deviation on the right and walk for another km.

A bit of reality dawned when we saw the railway station. It was in a dilapidated state and indicated of the things to expect on the route.

At day light, we started our journey on the tracks. The initial stretch of about 2 kms is on a plain area and we were thinking what the heck it was and the trek suddenly looked too easy. Shortly our opinions had to be changed. After about an hour, we were at the first bridge. It was about 50ft in length and one of the easiest of the lot that we would be encountering later. From photos, it would look simple to cross a railway bridge. But in reality, it would be bit tricky. First there are no railings to hold. Then, we had to walk on sleepers between the tracks and can see the river flowing down. Added to that it was rainy season and the tracks were extremely slippery. But chance of falling from the bridge was remote still it would test one’s nerve. 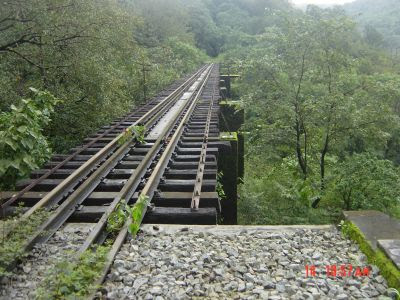 After the second bridge was a tunnel. From the opening in the tunnel, we could see a river flowing furiously. 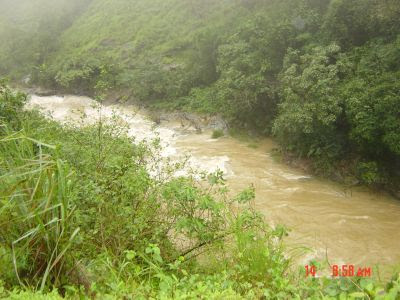 It was then series of bridges and tunnels. We got used to them and crossing was not difficult. Years of negligence and lack of maintenance had turned this track to useless. There was lot of land slides all along the route. One of them extended for almost half a km. At one point we were at knee deep inside mud and slush of a landslide. When tried to lift our legs, the shoes remained inside mud!! It looked as though we were struck in quick sands. It took nearly an hour to cross this landslide and to clean ourselves in the river. 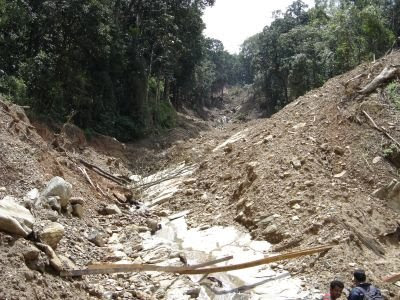 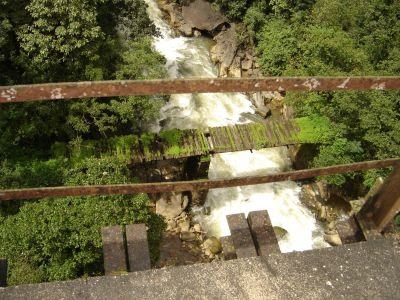 The next biggest hurdle was bridge no 20. Some people call it killer bridge and I completely agree with them. It was the longest bridge of the day and since it turns to the right, we cannot see the other end. It was also the highest bridge and there was a fast flowing river. As we started crossing silently, I was shocked to find that some of the sleepers were missing in middle of the bridge!! What a bridge!! With my legs shaking, I had to go to the side of the track and walk. A small slip would end me in the river below. Scared, I started crawling. When I turned back, both of my friends were in the same situation. 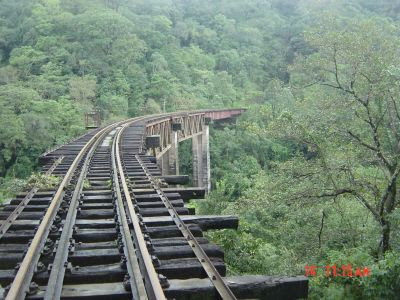 After crossing this bridge, we took few minutes rest enjoying the nature and taking stock of the situation. Clearly, we did not expect this kind of an adventure. Also, we did not find any other group trekking on the route. Not a soul seen on the route. It looked as the height of isolation. 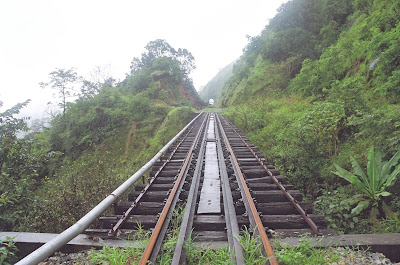 We then crossed the longest tunnel which was about 500m. It was completely dark and usage of torches was must. Unfortunately only one torch worked and we had to form a train to walk in the tunnel. 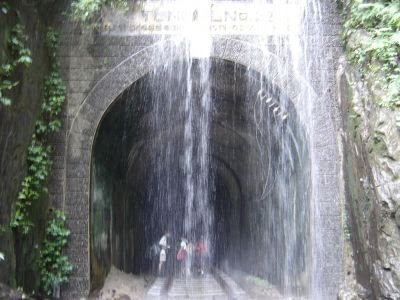 There was one tunnel which was completely flooded. Luckily, there was a deviation for the tunnel and we took it.

We had been walking for almost 6 hours non stop and still Yedakumeri was not in sight. On one of the bridge, my friend slipped and one leg went down the bridge. He could get back on the bridge again but it scared us a lot.

At about 1:30PM, we reached Yedakumeri station. This was supposed to be our halting point. But the station was in a hopeless state. None of the rooms were fit for stay and water was pouring inside the rooms. Though the platform was clean, we had not brought any tents. It was raining cats and dogs. There was nobody at the station. I also had heard the route further was in a very bad shape due to landslides. We decided to call it a day and return back to civilization.

But still our problems had not got over. There was an exit path to the highway but had to cross Kemp hole river which was overflowing. Even a swimmer would not dare to cross it during monsoon. The other option was to return back on the same route and cover the terror bridges and tunnels. But it will not be possible to return back to Donigal before dark. We were in a hopeless condition and I could sense that my friends deciding never to trek in future!! 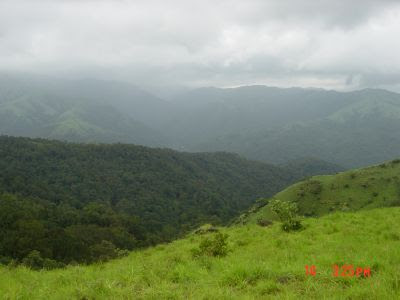 Then came a Mallu, the man of the day. He was doing some work at the station. He told that we can reach a village that was on top the hills. We request him to a great extent to take us to the village as we had no idea of reaching the village. He agreed but demanded money which I felt was bit huge. But we did not care. Getting out of the railway track was our first priority.

We had our packed lunch at the station and then followed Mallu. It was a continuous climb and already dead tired, it was extremely tough for me and even more for my friends. The rains, slippery, leeches had made mess of a situation. After some 90 minutes of climbing, we reached Kagingeri village. The only bus to the village had already left. I went to a house that had telephone and called a Jeep. Since it had to come from Sakleshpur, we rested in the school. The Jeep then dropped us at Valagere cross. We took a bus to Sakleshpur and then to Bengaluru. It was 1:30 AM when I reached Bengaluru.

A year had passed since then. The feeling of not making to Siribagilu was bogging my mind. The stretch between Yedakumeri and Siribagilu was supposed to be most scenic. The broad gauge conversion was going on at a fast rate and there were news that trains might be running shortly. So, a trek was planned by Chandan to railway track on September of 2005. This time, there was a good crowd of 25 people in the trek. 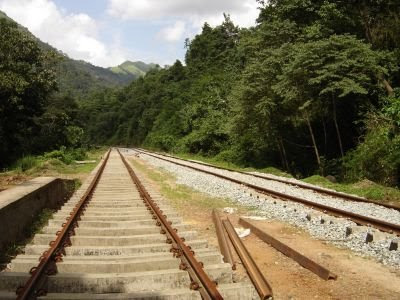 To avoid walking in the plains after Donigal, we got down at Heggadde, a few kms after Donigal. The gauge conversion was almost complete and the bridges were also in a good shape. 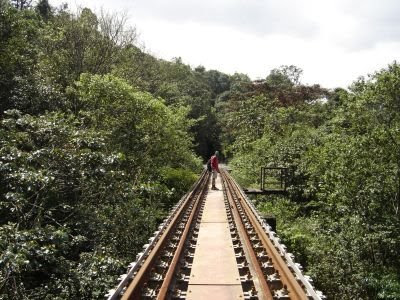 This Yedakumeri station was getting renovated. We had reached early and though the nice platform tempted us to stay for the night, we proceeded further as we knew that next day would be a long one. Since we had tents, we could camp anywhere, we thought.

There was a sudden downpour in the evening. Since most of us were crossing a bridge at that time, we were completely wet. But our plans of halting at a place was thwarted by a group of villages who warned that it was an elephant track and would be blocking their way in the night. So, we moved further and just before dark, we were at Tunnel no 21 and decided to stay inside the tunnel. The villagers whom we met were actually hunters and they had made sleeping arrangements inside the tunnel. It was a straight tunnel of 300m in length. Outside the tunnel, there was a vast area and few people pitched tent there. Water was not a problem, there was a stream flowing near the tunnel.

It was a night to remember for long. We cooked our MTR’s inside the tunnel. Sleeping inside tunnel was a nice experience. It was raining and cold outside but quite warm inside the tunnel. But it was a sad day for a civet cat. Hunters bagged it during night.

Next day provided the best part of the trek. Tunnels and bridges were numerous and not very well maintained. At one place, we could see the highway and the towering peaks of Shiradi ghat. Waterfalls were everywhere and one of the most beautiful part of the trek. 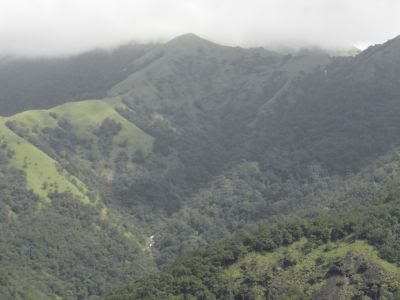 The longest bridge was on this stretch, much longer than the killer bridge. It offered panoramic view of the mountains, valleys and forests. Some workers were working on the bridge. 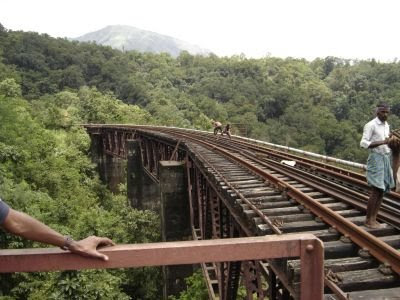 We were already split into several sub groups and few of us who were in the lead got down into a river after the longest bridge. Here, we found a lorry fitted with train wheels. It had come to supply food for people working on the bridge. We got into the lorry and went to Siribagilu. This 3 km of lorry journey on the railway line was fun. Siribagilu is a railway station similar to Yedakumeri but has a small Tea shop run by a Mallu. At total we had nearly covered 36 kms from Heggadde with 45 tunnels and 80 bridges.

A new road was constructed from Siribagilu to Gundya Subramanya road. There was couple of streams that we had to cross. It would be a tough task to cross them during monsoon.

Almost one hour of downward journey from Siribagilu took us to the road. We then took a bus to Kukke Subramanya and after visiting the Temple, took a night bus to Bengaluru.

My next desire is to cover this stretch on the train. But currently, a single train runs during night. I am waiting for a day train, but will railways ever do that?