Background
A mail that I sent to my friends about going for a trek on met with a surprising response. Every one of them was ready for the trek!! The next task was to find out a place to go. After discussing about lot of trekking spots, we finally zeroed on Amedikallu. 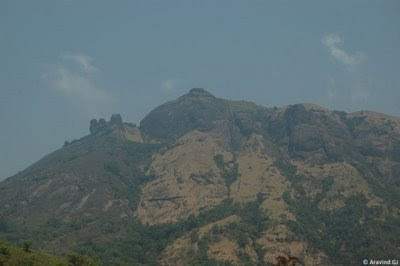 About the peak
Amedikallu is a prominent peak in the Charmadi range of Western ghats. This peak is considered to be one of the toughest climb in Karnataka. The steep climb, grasslands and paucity of water make the trek arduous.

The journey
Nine (Adarsh, Aishwarya, Aravind, Arjun, Ashraya, Girish, Krishna, Naveen and Subbu) of us started from Bengaluru on Friday night. It was a sleepless journey thanks to the hopeless road of Shiradi ghat. When we reached Dharmastala at 5AM, Prachi and Dhimoy had already arrived from Mysore and were waiting for us. Not to waste time, we immediately boarded a bus to Kokkada (15 km from Dharmastala). Since it was dark, we could not know exactly when we crossed Kokkada, but before we could realize it, the bus had moved 2 km further. Scolding the conductor for not dropping us at the right place, we walked back to Kokkada.


At Vishu Gokhale’s house
It was at Kokkada we got the news that the road to Shishila was closed for repairs. No one could tell us whether a bus to Shishila would arrive or not. We caught hold of a Jeep guy and convinced him to drop us at Shishila. It was a round about journey and at 8AM in the morning, we were at Shishila. Like any other trekkers visiting Shishila, we went to Gopu Gokale’s house. 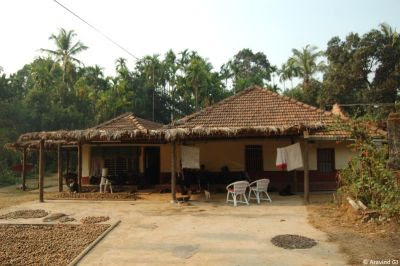 Gopu Gokhale was not available and his brother Vishnu Gokhale took care of us. We had our morning activities and breakfast at his house. Vishnu Gokhale had also arranged for a packed lunch for the trek. The hospitality shown by him was simply great!! Our guide Chennappa had arrived by that time and at 9AM, we were all set for the trek.

Start of the trek
The start of the trek was about 4 km from Vishnu Gokhale’s house and Chennappa had arranged for a Jeep to travel that distance. On the Jeep, few of us were sad about the latest developments that were taking place in Shishila. (More about it at the end of the article).

Finally, at 9:45AM we started the trek. Initial climb was through Bamboo forest and within few minutes the hardship of the trek began. The hot and humid climate made us to sweat profusely and in the process made us extremely tired. Even the forest shade would be of no help. I had not been into any “tough” treks recently and I could feel the initial reluctance of my body to climb up. 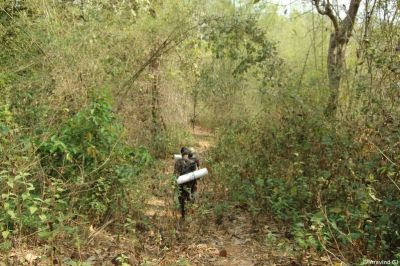 We were automatically split into three groups. The big difference in timings between the first and the last group meant that the people in the first group had to break for rest for a long time and wait for the last one to arrive. The breaks were frequent and long.

At the grasslands
After about 90 minutes of climbing in the forest, we came to the open land. Amedikallu was visible for the first time since we started the trek. The mountain simply looked huge. Until now, the climb was only moderate and the route further promised to be tougher. We took a long break of 30 minutes for the last group to join. 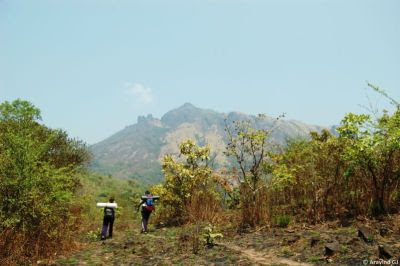 The trek ahead was crisscrossing the grasslands and shola forests. There are several routes from here to climb Amedikallu and all of them are tough!! The normal route was to go straight to the base of the peak and climb directly. But non availability of water on that route made the guide to take us through an alternate route that had a water point. 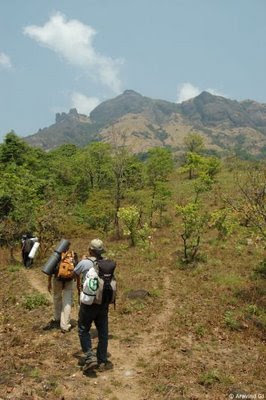 At about 1PM, we were at the water source. Being the only one water point all along the route, we had our lunch there and filled up all the bottles.

Post lunch…. toughest stretch
The post lunch trek started at 2PM. We continued on a flat land in the forest for another 15 minutes and then climbed a steep climb for about 5 minutes to hit the grasslands. The sight of the grassland made us to take a break in the forest!!
The next 30 minutes was a moderate climb on the grassland where we crossed couple of dried ponds. The time had come for the toughest part of the trek. It was the climb to the base of the 3 stones from the base of the peak. The area was supposed to be filled with Elephant grass but since all of them were burnt in forest fire, it was a dry hill. 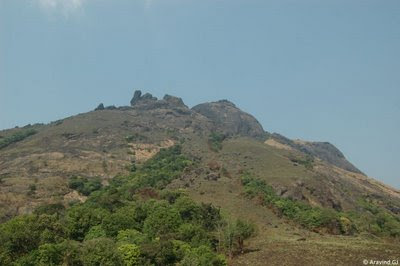 The sun was scorching and the path was devoid of any cover from sun. Only places to rest were the shades provided by few rocks. The journey was slow and it took me about 50 minutes to complete this stretch. Chennappa had suggested moving in a zigzag manner instead of trying a direct climb which helped a bit. 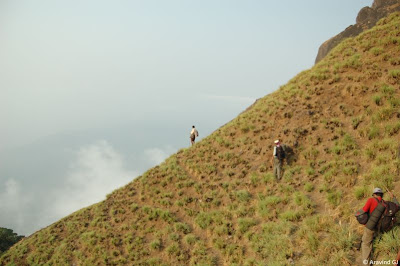 After reaching the base of 3 stones, we took a very long break of nearly an hour!! The second group had come by that time and the third group was not at all visible. Chennappa became concerned about that group then. With the current pace, he felt that it would be difficult to reach the peak before dark. He decided to go down and helped them to climb up. In the mean time, he asked us to continue towards the peak.

Forest and the final climb
The peak was a perpendicular rock from our side. So, we had to enter into the forest and go to the other side of the peak. A big cave at the entrance of the forest where up to 10 people can camp. 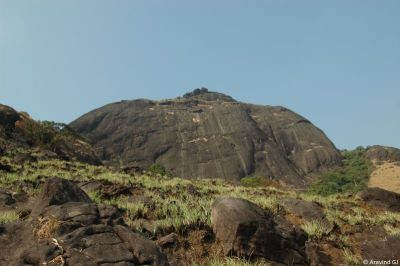 We walked in the forest for about 20 minutes to come to the side of the peak. It was completely a rocky area. Chennappa had told that the camping site lies somewhere on the top. We climbed further in search of the camping place. While navigating though rocks, I looked down for a moment. Seeing the deep gorge down, I felt sick. I am a bit acrophobic and recently developed a phobia to walk on rocks after Basavana Baayi incident. I could no longer move further and decided to just sit down.

Change in the weather
In another 15 minutes, second group people arrived. There was a sudden change in the atmosphere then. The entire area was completely engulfed in the mist and became cold resulting in a sudden burst of energy in me. The gorge was no more visible because of the mist and I started to climb with renewed energy. I could hear from the first team that they had reached the campsite and within 15 minutes, I joined them. It was 5:45PM at that time. We had taken 8 hours to climb. The third group arrived after half an hour. The campsite was 25 mtrs down from the peak. 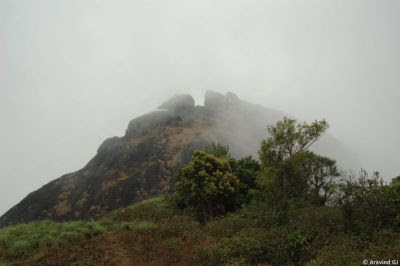 We could not experience the sunset as the weather was misty. Chennappa was worried that it might rain during the night. Since it was summer, we had not brought any tents. We would be in a bad shape if it rains. 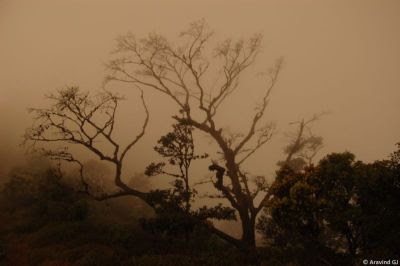 Night
In the mean time, Chennappa started making preparations for the camp fire. Chappatis and MTR ready to eat were opened from the bags. At 9PM everybody had hit the sleeping bags!!

Shortly after sleeping, I could feel the droplets on my face. The drizzle had increased and there was a commotion in the group. I got up and secured my camera and other important items in the plastic bag and then got myself completely inside sleeping bag. Luckily, the drizzle never turned into rain. When I got up sometime in midnight I could see stars in the sky. I then slept happily thinking about the beautiful sunrise the next morning. 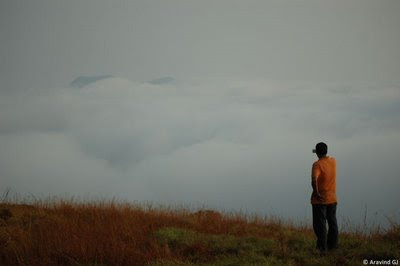 Misty morning
When I got up at 5:45AM, weather had changed again!! I could not even see an inch from my place!!!! Mist!!! I was pissed off. All along the climb we were troubled by the scorching sun and clear sky. When we needed the clear sky badly, the mist had spoiled the entire show. 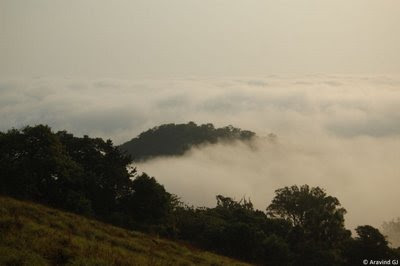 At 6:30AM, we started climbing the peak. Though the climb is completely on rocks, it was not very difficult. We waited for nearly an hour, but seeing no improvement in mist situation, we climbed down to camping site. 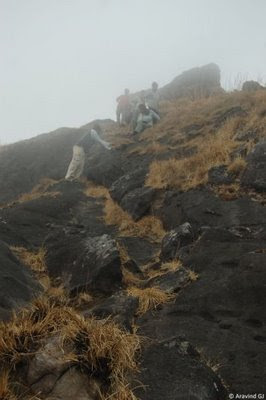 We started back at 8AM, and the climate changed instantly. The mist of cleared and we could see hanging clouds everywhere. Ettina Bhuja, Minchukallu, Jenukallu, Ombattu Budda were all visible. 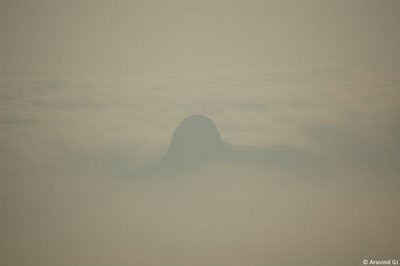 Back in Shishila
We had our breakfast at the water point and reached Vishnu Gokhale’s house at 2PM. We were greeted with butter milk and had stupendous lunch at his house.

At 5PM, we bid adieu to Vishnu Gokhale and reached Dharmastala. Few of us visited the Temple and had food there. An overnight bus took us safely back to Bengaluru.

Few points:
- There are many approaches to Amedikallu and the climb from Shishila is popular among trekkers. Another relatively easier route is from Neria, but getting permission from Hebbar estate is said to be next to impossible.
- It is possible to climb Amedikallu without a guide. But water can be serious problem on the route. Only guides are aware of the water source, hence advisable to hire a guide.
- Amedikallu is about 6 hour climb for an average walking person.
- Vishnu Gokhale at Shishila provides the food and guide, if he is informed of your journey before.

Final words:
Sad developments are happening in Shishila. Government is building a new highway from Dharmatala to Mudigere that passes through Shishila and cuts into the evergreen forest to reach Bhairapura and Mudigere. Local people tell that the road passes very near to Ettina Bhuja. Lot of things may change in Shishila in future. If one is suddenly air dropped in Shishila now, it is possible that he may think that he is in some part of Bellary. 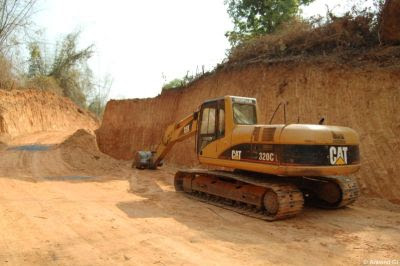 Few reasons cited by the Government for building this highway are:
- Providing an alternate road to Chamadi which closes during monsoon due to landslides.
- Shiradi ghat road is not repaired!!

These problems can easily be resolved by repairing the existing ghat roads and providing several trains on Mangalore-Bengaluru route. 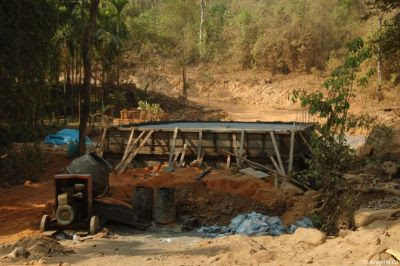 I could not find much information about the highway. All I got was the 2 websites.

1. Dinesh Holla of YHAI expresses concern that there is a proposal from Government to build a new road. Well, the proposal is no long in paper.

2. When it comes to “eating”, politicians across party lines queue for it!! Check the "New Road" section.

The Government that does not care to repair the roads puts all its resources in destroying the forest to build a new road!!

If you are planning to trek to the places near Shishila do it ASAP.