1st May - 3rd May 2009
During Second World War, British feared a possible Japanese invasion of Indian coast. In order to facilitate the British tea planters in Munnar to escape, a road was constructed from Munnar to Kodaikanal. But the road was never used for its intended purpose as Japanese could not invade India. Later during 1960’s the forest department stopped public from using the road turning into an abandoned road. Such places always evoke great interest among trekkers!!
The trek usually starts from Berijam Lake, 24 km from Kodaikanal and ends at Top Station which is 30 km from Munnar. The actual trek distance is about 23 miles (36 km) if the milestone reading at Berijam Lake is correct. We did not exactly follow this path. Permission from DCF, Kodaikanal is a must for trekking on this road.
This trek was organized by CTC (Chennai Trekking Club). I came to know about them recently and was impressed about some of the treks they conducted. When there was an announcement for this trek, I and my friend Krishna joined the trek.
55 people had registered for the trek and 14 were from Bengaluru. It would be a daunting task for the organizers, we thought.
We were supposed to start at 8PM on Thursday evening from Jayanagar. Due to various reasons the journey started only at 10PM and it was past midnight when we left outskirts of Bengaluru.
After having breakfast in Palani, we proceeded towards Kodaikanal. Due to traffic jam on the ghat road, the journey was slow and we reached Kodaikanal at 11AM. The group from Chennai had not arrived. So, we spent time in loitering near Kodai Lake and Bryant Park. The park had some excellent collection of flowers. 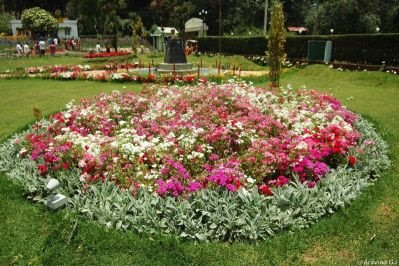 At 1PM, we came to know that Chennai group had arrived but few of them had gone for lunch and some others went to different places!! Finally, it was 3:30PM when we started towards the Berijam Lake.

Berijam Lake is not open to all tourists and permission from forest department is needed for entry. 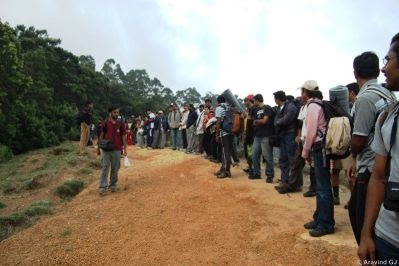 Our vehicles stopped few km before Berijam Lake at a place called Caps valley. This was the starting point of our trek. It was 4:30PM when we started our trek. The initial path was next a deep valley and then the path entered into a shola forest. Within five minutes of starting the trek, we came across a carcass of a Bison. Our guide mentioned that the trekking route was full of wild animals and if remained silent there was a possibility of spotting some wild life. But that never happened; with a group of 55 people sound was a constant companion. 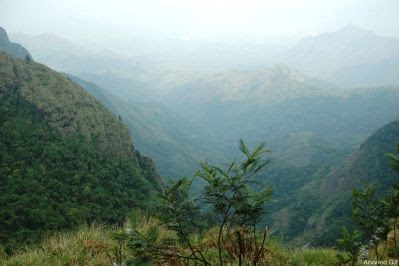 At some point we could see coniferous forest was encroaching into Shola forests. The boundary between them was fenced to avoid further encroachment!! 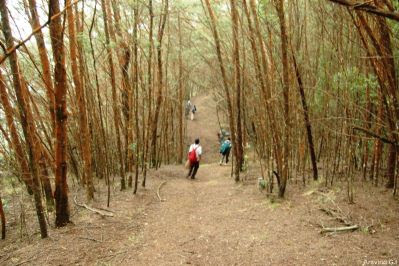 After an hour of trek, we took a long break where we had snacks. It was dark when we started and another half an hour of trekking; we were at the tar road connecting to Berijam Lake!! Apparently serious trekking had not started!! 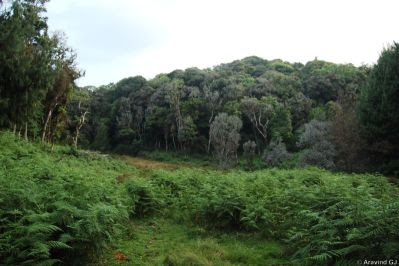 Night was spent at the forest quarters in Berijam Lake. 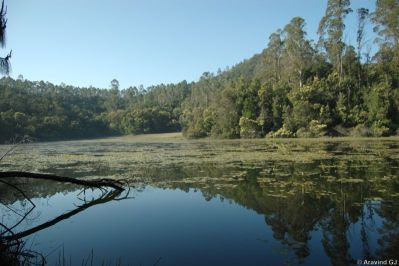 Saturday day morning started with a visit to Berijam Lake. The Lake is spared from visitors as permission from forest department is required to visit the lake. The lake has hence retained its original beauty. 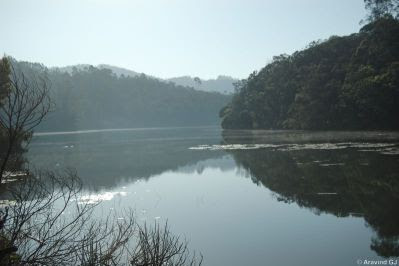 After having breakfast and packing the lunch, we started the trek at 10AM. It was late by any trekking standards but our guide Mani was not much concerned. The tar road from Berijam changes to a mud road. It was once a tar road and the remains of the tar can be seen all along the route. A milestone at the start of the trek indicated the distance to top station as 22 miles. 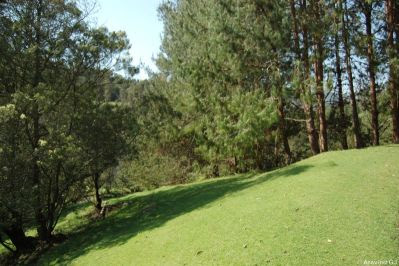 For some unknown reason, our guide Mani preferred to stay in the middle of the group. This created a problem for the people in the front as the road had several deviations. Many a times, we had return back for taking a wrong route.
It looks like we took a deviation from the escape road after some 45 minutes of trekking from Berijam Lake. We entered a narrow path that took us to Lonalar Lake. Our guide asked us to spend “as much time as we want” at the Lake. The location was good and we spent nearly an hour at the lake. 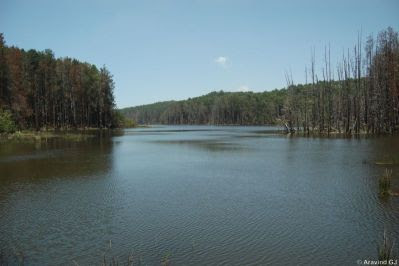 People left the lake rather reluctantly and within 30 minutes we were at another lake. Mani announced that it was time for lunch. So, the break was even longer!! A supposedly hard trek was turning out into a picnic. 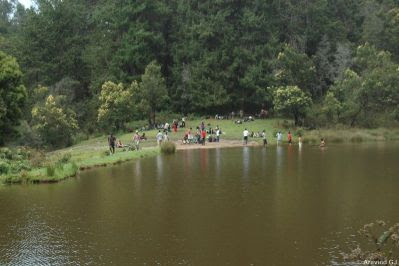 We found that the lake was not far from civilization as some village people popped up with head load of chopped trees!!
Another half an hour of trekking, we were at the village Kavunji. It was surprising to see modern farming techniques being deployed. Even more surprising was in spite of modern cultivation techniques people seemed to be extremely poor!! Something was fishy!!!! A possibility the Krishna and I thought was the land might belong to “cash rich” people and the villagers were just labourers working in the farms. From Kavunji few of us took a bus to Natrampalli, 5 km from Kavunji. Here was our stay arranged at forest quarters. People spent time playing Kabaddi. In the evening, we also visited a waterfall that had gone dry. The 3rd day trek started relatively early at 8:30AM. It was told that it would be a long day as we had to cover a long distance. 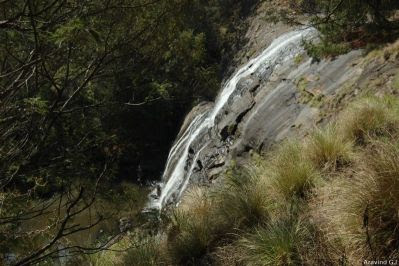 An hour of walk from Natrampalli on a Jeep track brought us to a waterfall. (I have forgotten the name of the falls. It was some Tamil name.) The falls ensured a pit stop of an hour. 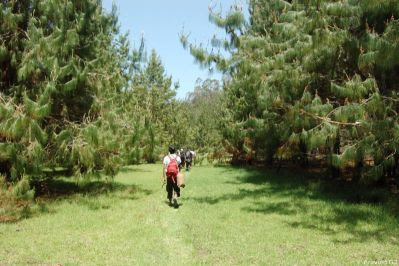 After the falls, we rejoined the escape route that we deviated on the previous day. This part of the road was not maintained by forest department. The forest had taken over most of the road. Fallen trees were aplenty. 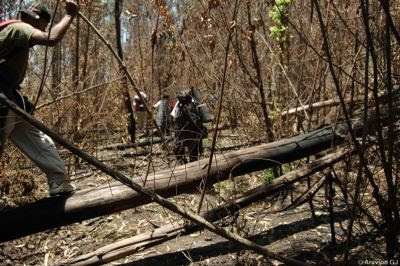 This made the journey slow as we had to either get under the fallen tree or climb over them. In addition to that, it was a continuous climb. 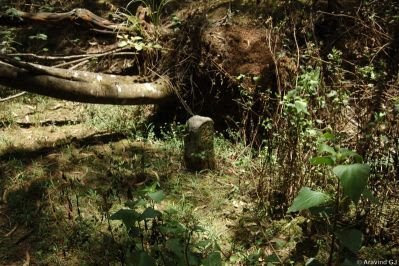 In some places, it was almost impossible to wade through the forest and had to take detour. Finally, the trek was interesting!! 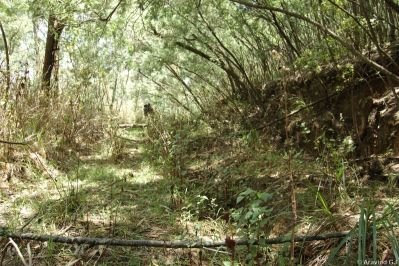 The stretch was also devoid of any water source and we had to regulate the water usage. Lunch was at a place where the road opened up a bit. 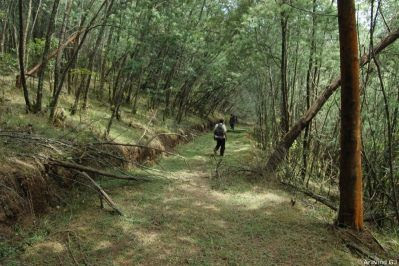 After nearly four hours of uphill trek, we reached the Kerala border. It was clearly marked by series of stones. The road condition changed dramatically as we entered Kerala. The road was in a better shape since it was used by forest department. 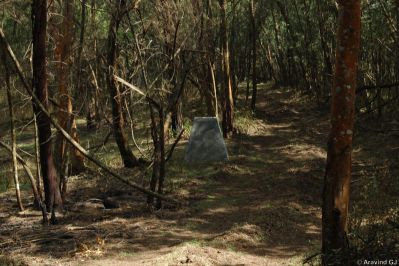 We trekked for another two hours and took a deviation from the main road. We had to wait for a long time for the people at the back to reach. Confusion about a person being lost added to the delay. 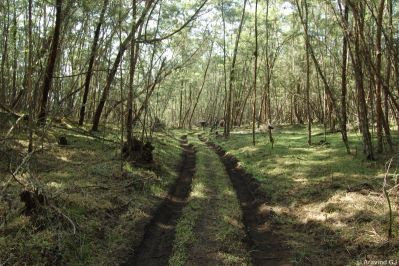 It was then continuously downhill trek to Koviloor village for nearly 90 minutes. The watch showed 6:30PM when we reached Koviloor. Jeeps were arranged to take us to Munnar which was 35 km away. The Jeeps were completely packed with people. It was a nauseating journey that caused more tiredness than the entire trek.

At 11PM, we started back from Munnar. The journey to Bengaluru was almost non stop, but still it took 12 hours. I had to apply leave in the Office.
More photos of the trek can be seen here.