11th July 2009
My quest for Hoysala architecture has led me to the places unknown to me few months ago. Kaidala was once such place. 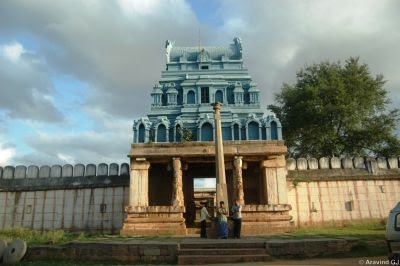 Kaidala was the birth place of the chief architect of Belur Channakeshava Temple, Jakanachari. It was called as “Kridapura” in those days. Legend says that while Jakanachari was involved in the construction of Channakeshava Temple at Belur, his son Dankanachari grew up in Kridapura. Being a sculpture himself, he comes to Belur in search of a job. It happens that he goes into Channakeshava Temple complex and finds that the main idol of the Temple was defective. Jakanachari, being the main architect of the Temple was furious and vows to cut his right hand if Dankanachari proves the defect in the idol. Dankanachari shows that the stone used for the idol had a shallow part inside where frogs, water and sand was found. Jakanachari who was stunned to see this cuts his right hand to keep up his word. It was then Dankanachari comes to know about his Father. They then return to Kridapura where Jakanachari using his left hand creates the idol. A miracle occurs where his right hand reappears. The name of the village was henceforth called as Kaidala. (‘Kai’ means Hand in Kannada). The first color movie in Kannada “Amarashilpi Jakanachari” was based on this legend.
The ending of the legend looks dramatic, but a legend must always be taken with a pinch of salt. 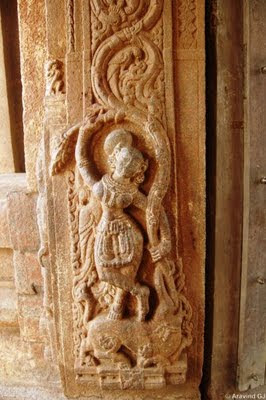 Historically, the construction of this Temple dates to 1150 AD.
Direction:
From Bengaluru, take the road towards Tumkur.. Just before Tumkur is the toll gate on GQ. After crossing the tollgate, take the Tumkur bypass towards Gubbi. After about 8 km is a four road junction. Turn left and follow the directions given. Kaidala is 4 km from the junction.
The Temple:
The first look of the Temple gives the feeling of the architecture being very simple. Even the Garbagruha is does not give a feeling of grandeur. What makes this Temple stand apart is the five and a half feet idol of Channakeshava. It is the master piece of Jakanachari which beats the idols of any other Hoysala Temple. The facial expression of the idol and ornamental design is just superb. The design by which the rays of sun fall on the idol is admirable. 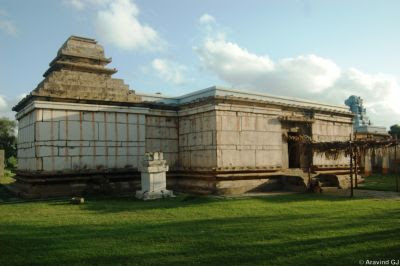 But it is not allowed to take the photograph inside the Temple.
On the outer wall of the Temple, a small carving of two people is said to be that of Jakanachari and Dankanachari. 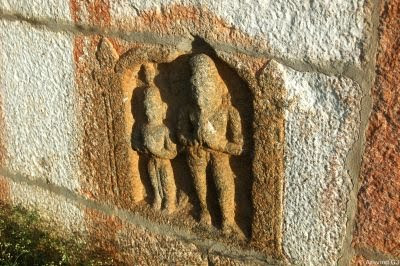 Next to this Temple is Sri Gangadhareshwara Temple, also built during Hoysala regime. It was closed and I peeped into the Temple only to see the stones and dust. Obviously, the Temple has not been opened for the last few months. 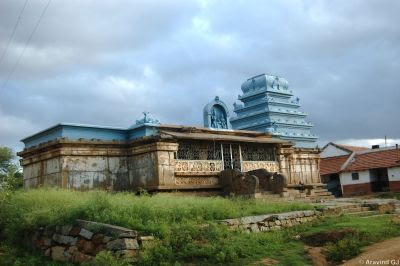 More photos of the Temple can be seen here.