9th August 2009
I had heard about an 18 feet Varaha idol at Kalhalli near KR Pet. Since I could not get any details about the directions, I decided dropped it from my plan of Hoysala Temple visit.
It was at Hosaholalu where a very elderly person provided me some directions to reach the Temple. Though he mentioned the distance as just 6-7km, the directions seemed to be very confusing for me. But he convinced me that all along the way people would guide me in finding the route. 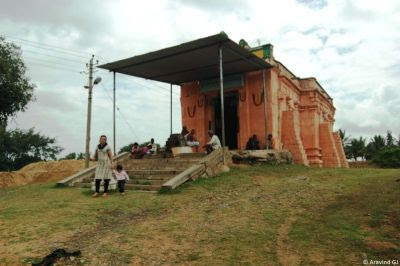 I looked at my wife for her approval. It was already 1PM, time for lunch. Her main grouse while traveling is that I make her starve!! While I do not care much about the food during travel, she needs constant supply of them!!!! After giving an estimate that it would take about an hour to see the Temple and back, she gave me the go ahead signal. So we proceeded towards Kalhalli.

What I found later was that the distance was completely inaccurate. The route to the Temple was through several villages. Every km I had to ask a person for direction and each time I found entering a smaller road!! The road was sometimes very good (thanks to Pradhana Manthri Gram Sadak Yojna) but suddenly deteriorates to a muddy track.
We had traveled for nearly an hour but still no signs of Kalhalli. My wife reminded me that I continued my tradition of keeping others hungry during the trip!! Having gone so far I was in mood to return back. 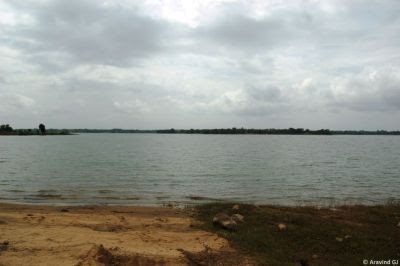 Suddenly, we could see a huge water body. Well, we had reached the back waters of KRS dam!! The country side was hilly and provided some good scenes. 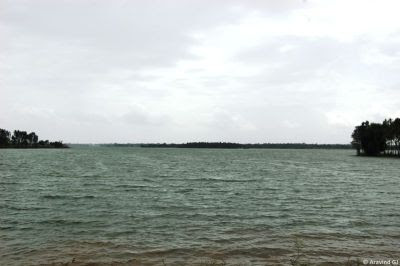 Finally, after about 75 minutes of travel from Hosaholalu, we reached Kalhalli. The road directly led to the Temple. There is nothing near the Temple. The Temple itself marks the end of the road.

It is a small Temple, but the statue of Varaha is huge. The fact that the Temple is next to the back waters of KRS dam provide some pleasant feeling. It would have been a nice spot to have lunch had we brought some packed food. 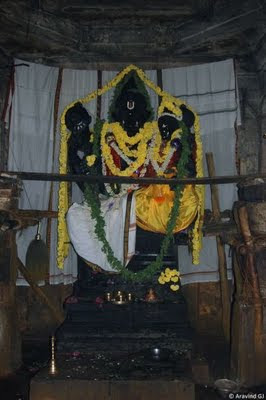 The priest at the Temple told that the Temple was constructed during the times of Sage Agasthya. But more likely it was built during Hoysala times. There is a shashana in front of the Temple which might reveal some details regarding that. 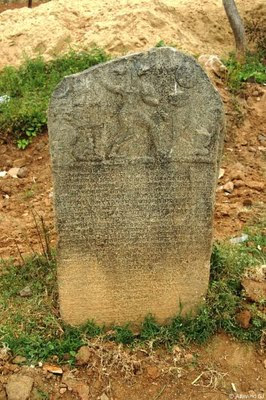 Since our destination was Bengaluru, the priest suggested me to take an alternate route which would directly lead to Pandavapura. Here again, there was no direct route and had to rely on the villagers for direction. The road was hopeless for most of the journey. At one place, when asked for directions, a villager asked whether I could drop him to the next village!! Normally I don’t entertain such requests, especially when I am with my family. But this guy looked innocent and he was accompanied with this wife. So, I asked them to jump in. 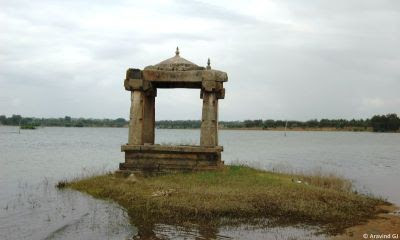 The couple was talkative people and in the short span of 15 minutes, we got lot of information about their family!! The only word we spoke was “houda” and “hoon” and they seem to be encouraged by this response!!
The couple got down at Bookana kere, a big village. From then it was a direct road to Chinakurali, a small town on Mysore-Chennaraya Patna highway.
Finally, we had lunch at 4PM!!