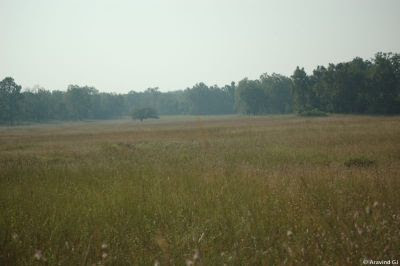 Travel to Bandhavgarh:
We boarded Narmada Express from Bhopal at 11:30 in the night. At 11 in the morning, we alighted at Umaria, which is the gateway for Bandhavgarh. Almost all resorts and hotels are situated in a village Tala, 30 km from Umaria. We hired a taxi which took us to White Tiger lodge, an MPTDC resort.
About Safari:
The two entry gates through which the safaris are conducted are from Tala and Khitauli. Tala is preferred by everyone as maximum number of sightings happens here. Two safaris are conducted veryday. The morning safari starts from 6:15AM and ends at 10:15AM. The afternoon safari is from 2:15PM to 6:15PM. 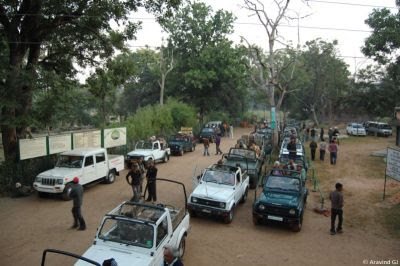 Only Jeeps that are registered with forest department are allowed insde the forest. A maximum of 45 Jeeps are allowed per safari. It is on first come first basis. Rest of the vehicles must go though Khitauli entrance. 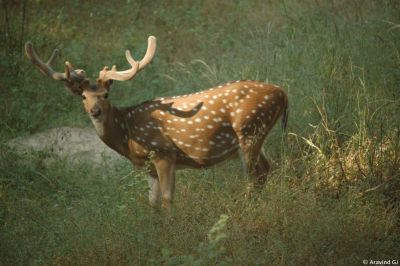 Durinf previous years, if a tiger was spotted, the news would have spread to all safari jeeps and within matter of few minutes the tiger would be surrounded by 45 Jeeps creating tension and stress for the feline. To minimize the traffic, the safari path is now divided into four routes A, B, C and D. All routes converge at a mid point where the drivers have to report to Forest officials. This is only the place where tourists are allowed to get down. Snacks and drinks are also provided here. So, a vehicle will be assigned a route from start to mid point and another route from mid point to exit. There can only be 12 Jeeps at any point of time in a route. 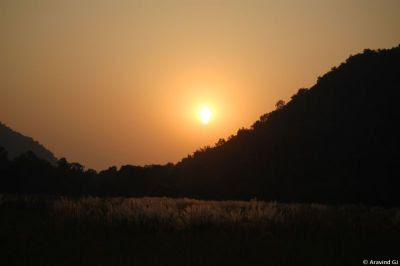 Sunset
Forest department charges Rs680/- for a Jeep and the driver charge are Rs1000/-. The total cost of a safari is Rs1680/-. This would also include a guide from forest department. The prices are fixed and no one asks for extra money. Each Jeep can take a maximum of 6 people which would then cost Rs280/- per head. While the cost turns out to be cheap for people in groups, it would be extremely expensive for solo travelers. But it is a common practice that people would form groups to go for safari to reduce the cost. 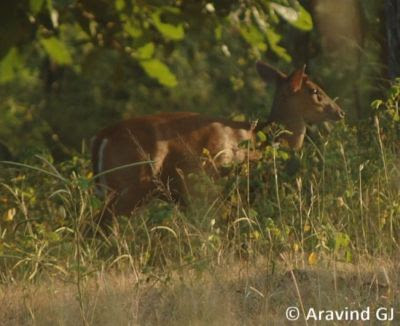 Barking deer
Trekking is not allowed inside the forest. Elephant safari is also stopped now. “Tiger shows” which ensured 100% chance of spotting a tiger is also on hold. 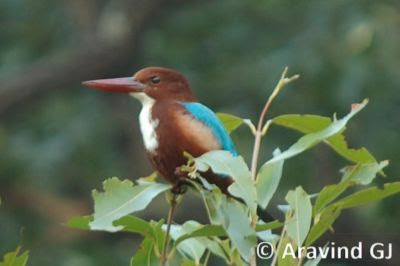 What is a tiger show?
Every morning, the trackers would track the pug marks of the tiger and find out the location where the tiger is resting. This information is provided to forest officials. The people on the Jeep are then taken on Elephants which would go very near to the tiger!! This was the most popular way of seeing the tiger in previous years.
Experience
I got down into business the moment I entered the resort. I had decided to go on every safari for the days I stayed in Bandhavgarh. My wife and kid decide to take rest in that afternoon while I decide to go on a safari. Resort people would arrange everything that is needed for the safari with no extra cost!! 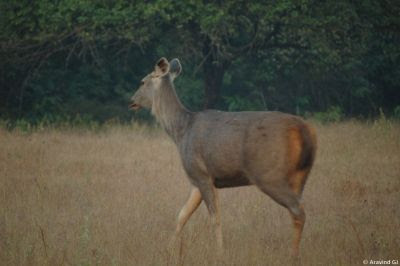 The striking difference in Bandhavgarh when compared to south Indian jungles is the total absence of elephants and bison in former. It is the deer family that is omnipresent in Bandhavgarh.
The first safari was eventful. Within few minutes, we saw a strange phenomenon (details in the next post). I was excited when our driver Sanjay Singh showed the tiger pugmarks. They were present for nearly a km after which the tiger had entered into the forest. 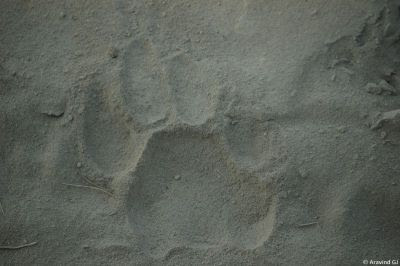 Pugmarks of a tiger

News that a tiger was standing at the periphery of the jungle prompted the driver to rush towards the spot. Unfortunately we were bit late and tiger had crossed outside the jungle. But we could hear the alarm calls of langur which meant that the tiger was in the vicinity. Few minutes later, there was a commotion in the nearby village. The sound of the villagers’ followed by tiger’s growl!! Sanjay told that the tiger might have entered the village to pick some livestock. 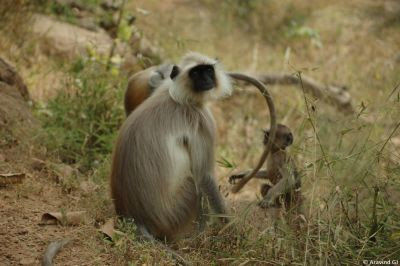 But the jungles were silent on the next day morning. An hour had passed since we started the safari but still we haven’t sighted anything. I think I was in some dreamland which was disturbed by a sound “Bagh! Bagh!!”. As I scrambled up, Sanjay pointed me towards a bush telling that a tiger was hiding inside that. I immediately saw a tiger running away!! I was quick that day to take a photo of the running tiger. It was my first tiger spotting and I was happy with it. 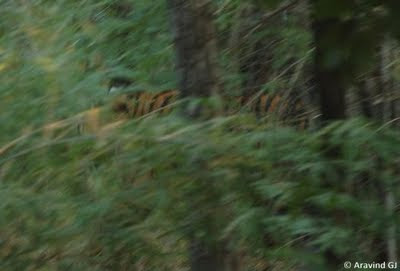 This was not the behavior of a tiger in Bandhavgarh. They are used to human beings and rarely run away. Sanjay told that the tiger we saw was about 20 months in age. It had lost its mother few months ago and was struggling to make a living. It was therefore was vary of human beings. 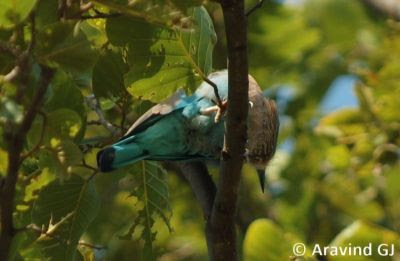 The safari on the next day morning was even more eventful. We see a tiger just next to us!! But the tiger never came out of the bush. Else, we could have got a nice shot of tiger in open. We were within its striking distance on an open Jeep!! What an excitement. We just stood and enjoyed for next 15 minutes. 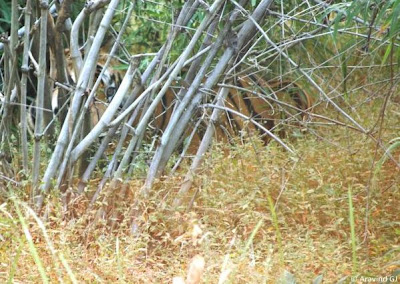 The tiger news spreads like a wildfire in Bandhavgarh and within minutes there were 12 Jeeps surrounding the tiger. People were shouting and Jeeps were moving back and forth (to provide opportunity for others to take snaps!!). The tiger got fed up of all this and silently slipped away.
And we saw one more tiger within few minutes!! What a day!!!! But again, it never came into open. 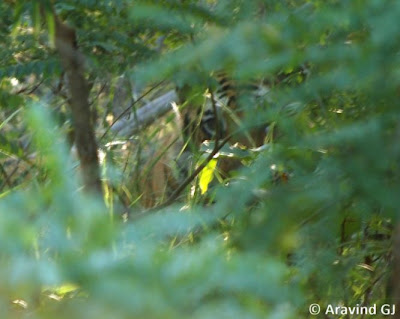 Bandhavgarh fort
After the tiger, my focus shifted to Bandhavgarh fort. Located on a hill at the center of the National forest, there are no records to show who constructed the fort but the fort was ruled by various dynasties from 3rd century BC. 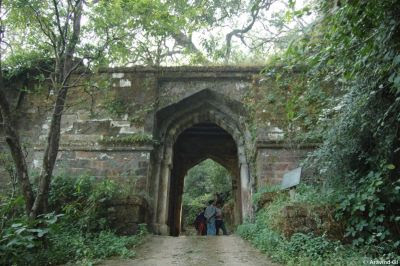 A very few people visiting Bandhavgarh would see the fort. One of the reasons is that the forest department allows only 5 vehicles per day to the fort. The trip to fort is also expensive (Rs3160/- per Jeep). Again, it makes sense to share the Jeep with others. 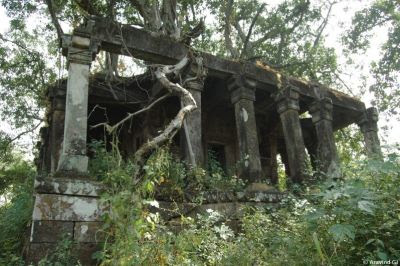 The road to the fort is steep which can be covered only by a four wheel drive vehicle. Earlier one had to trek for 30 minutes to reach the fort. The fort also is home to few tigers. So, a road was constructed to avoid trek through tiger land. 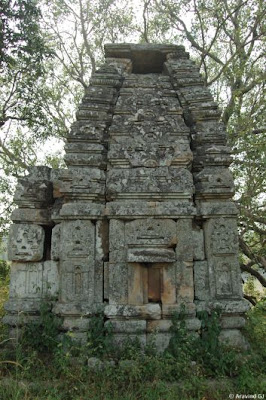 The fort is completely in ruins. The only structure that is intact is a Temple where pooja is conducted daily. One can see the remains of the fort everywhere.
One of the 18 ponds in Bandhavgarh fort. 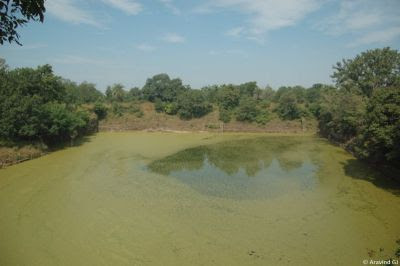 Our driver Sanjay cautioned us not to deviate from the main route as the area was home to a tiger family!!
From a view point, one can see large tracts of Bandhavgarh forest. The place is also home to several vultures. 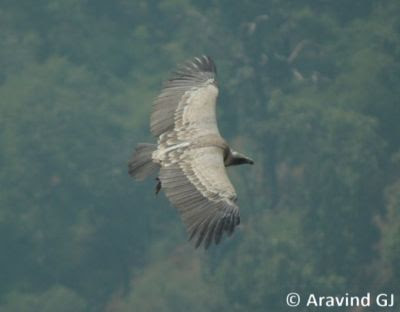 Final notes:
Before my Bandhavgarh trip, I was under the impression that sighting a tiger in Bandhavgarh was easy. This was due to many write-ups that I had referred. But it is not so. Tigers are always elusive. A majority of people return without seeing a tiger. The recent modifications for the safari route and with no tiger shows, the chances of seeing a tiger is reduced. But it is safe to say that chances of spotting a tiger are high in Bandhavgarh than in any other forest in India.
The forest remains closed during monsoon months (From 15th June to 15th October). The best time to spot tigers is during summer months. But one should be ready to face the temperatures ranging 40-45C during that time.
Focus of the safari is completely on tiger. Other animals and birds are simply ignored. The usual comment from guide is that “We know that you have come here to see a tiger. You can always other animals anywhere”. 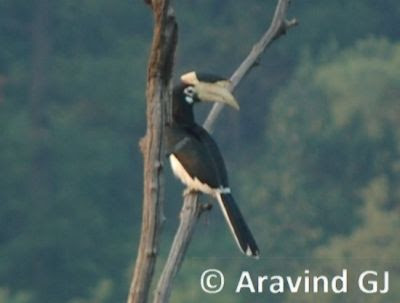 How to reach Bandhavgarh: