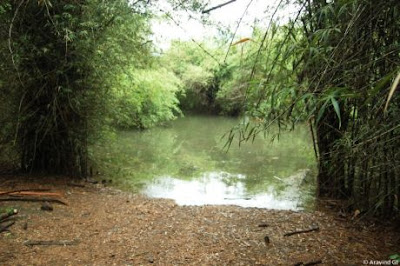 We had no luxury of asking anybody else, as we had not seen a single soul or a vehicle during our journey for last 25 km. The road was smooth with backwaters on one side and forests on the other. We reached a place where we had to cross the backwaters to reach our destination. Parking car on the main road was not a nice idea. So, we took the car into the forest hoping that it would be in the same shape on the next day when we come back. 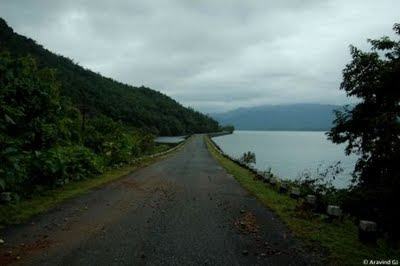 When our shouts did not evoke any response from the other side, we doubted whether we were standing on the correct place. There were pieces of gutka covers indicating that it was a “happening place”. Still we searched the entire area hoping to see the opposite bank. We were happy to see a tar road that directly went inside the backwater (covered with bamboo again). We then went in the opposite direction thinking that the other end of the tar road would lead to correct path, only to reach a similar water body. What a road that starts and ends in the water!!

As people turned desperate, I try to call up a few numbers that I thought would give us some directions or a pointer. One number was not reachable, other was switched off and the third one would have resulted in a missed call!! We started “kooing” again!!!! 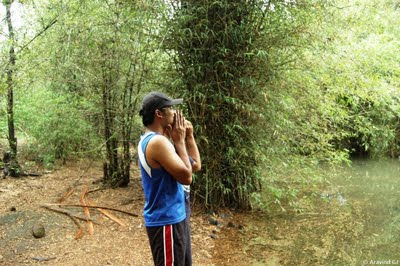 The watch showed 12PM. We had bought packed lunch and so we decided to just relax and wait till the boatman appears. Anyway, we had time till evening!! Just not to lose hope, we kept on “kooing” occasionally. Twice we thought we heard some response but we were not sure. Was it just a feeling or real? We would know it shortly.

After some time I sensed something moving between the bamboo bushes. It was a boat!! We jumped with joy as the boat approached us. Krishna was the boatman and he was the one who gave the response twice. Our ears had functioned properly!! 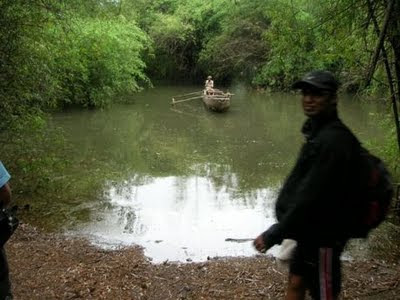 The boat journey
Once out of bamboo area, we entered the vast expanse of the backwaters. I do not know swimming and I am scared of travelling on a huge water body on a small boat. My family never likes me to travel to such places. So, I had brought a life jacket as a safety measure (Time to learn swimming!!). The boatman told that there has not been any mishap for the last 25 years. That was assuring. 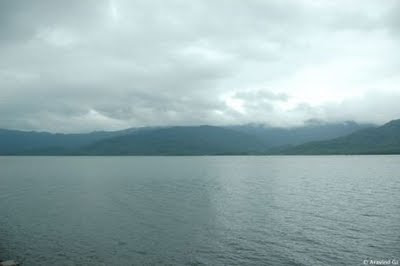 It would take about 15 minutes to cross the backwaters. As the boat was moving smoothly, we started enjoying the scenery around. The hills covered with mist, forest and the rains all provided a beautiful scene to watch. 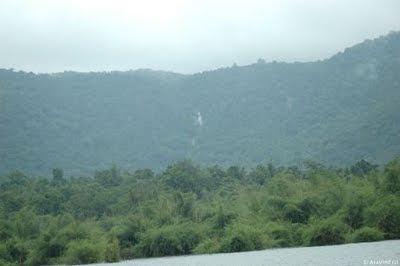 We were bit worried about the accommodation though my friend Rajesh Naik who had visited here few times had assured that it would be taken care by friendly villagers. Krishna tells that we can stay at Prabhakar Naik’s house and we happily agree.

About Devakaar
We reach the other end of the backwater, which is the Devakaar village. It is a village that is behind few decades from the rest, where development has stopped from the last 25 years and provides no hope for the people who stay there.

It is not that the village is in some remote part of the world. In less than an hour’s walk, you can reach an atomic plant and couple of hydro electric projects. High tension wires run through the village, but the irony is that the village has no electricity.

It all started when KPCL started the twin dams of Kadra and Kodasalli on Kali River. The main road connecting Devakaar with Karwar was submerged by Kadra backwaters. But still people had an option to go via Kaiga village. But in the next few years, an atomic plant was set up in Kaiga which blocked Devakaar. The only land option left was to climb up the ghat to the nearest village which is not an easy task to do daily.

Now, there is only one bus that connects Devakaar to Karwar. The morning bus starts from Kodasalli and reaches Devakaar stop at around 6:30AM. So, the villages have to start at 6AM and cross the backwaters and walk a km to reach the bus stop. The same bus returns at 9:30PM!! So, people have to cross the scary backwater during the thick of darkness using a lantern. The trouble increases if it rains. 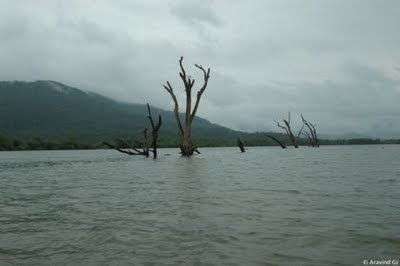 Children can only study till 4th standard in the local school at Devakaar. After that they have to go the nearby towns for study. Since it is not possible to travel daily, many children stay at hostels or relatives place for study.

As the village is very near to Kaiga Atomic plant, Government wants people to move out of Devakaar. Compensation is already given, but people want land to be provided to move out.

As we reached Devakaar, we met with Mahabaleshwar Naik. He asks boatman Krishna to take us to Prabhakar Naik’s house. The estimated 15 minutes of walk gets doubled. On reach the house, we were greeted by Prabhakar. The top portion of Vajra falls which was our destination of the day was visible from the house. 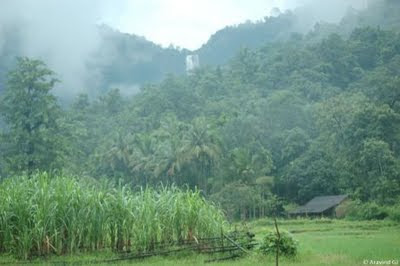 Trek to Vajra falls
We finished our packed lunch quickly and set out for waterfalls at 2:30PM. Prabhakar guides us to the falls. The initial trek was through the forests and within 30 minutes we were at the stream. The next part was along the stream. This stretch was tough where we had to navigate though slippery rocks. At some places, we had to enter into the forests as the rocks were too steep or slippery. All along the route, we could see the falls. 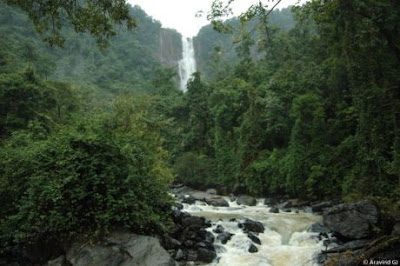 After about an hour of trekking, we reached a place where we see the full view of the falls. Since the water level was high, we could not go any further. The falls was about 300ft in height and is one of the best falls that I have seen. 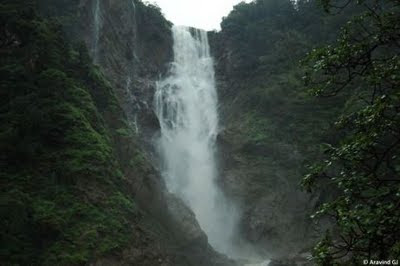 Return back also took the same amount of time. By the time we reached Prabhakar’s house, the drizzle had turned into a downpour. We had a hot tea followed by a hot bath which was very relaxing. 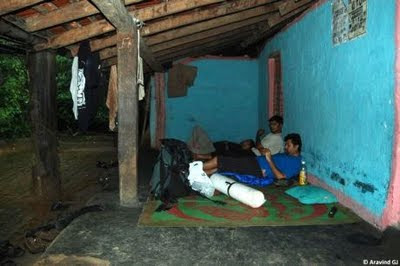 We thought that our adventures had ended for the day but not!!

A new experience
As we were relaxing on the verandah of the house, two people entered suddenly. As they were wearing raincoats, we could not identify them. I simply thought that they might be some trekkers who had come to visit waterfalls. But I was astonished by their aggressiveness. They asked few questions which I answered casually. It was as if I was ignoring them. They were not very happy with our way of speaking, and to bring seriousness to the situation they revealed their identity and told that they were the policemen on duty!!

Our tone and body language changed suddenly. The reason for policemen to come so far in search of us was simple. The area comes under the Kaiga Atomic plant and has an extra level of security. While patrolling, the police had found our car parked inside the jungle. Sensing something fishy, they had crossed the backwaters, found out who the owners of the car were and had come to Prabhakara’s house.

We were busy in answering the volley of questions thrown at us for the next half an hour. The queries varied from “What are you doing in Bangalore?” to “What investigation are you doing near Atomic plant?”!! As we were sure that we had not committed any serious crime, we answered all their questions calmly. They took our contact numbers, address, looked at our ID cards and checked our bags. Finally, they were convinced that we were just normal people who had come to visit the waterfalls. Being a localite and able to speak in local language helps a lot in such cases.

Moral of the story:
Before going to Devakaar, register at Mallapur Police station (near Kadra). It makes the lives of the Policemen easy and you will be free of any hassles. Policemen and Prabhakara specifically asked me write this in my blog!!

Next day, we were all set to leave Devakaar. Prabhakara came till the boat point where we bid adieu to him. The return boat journey was rough due to winds and rains. 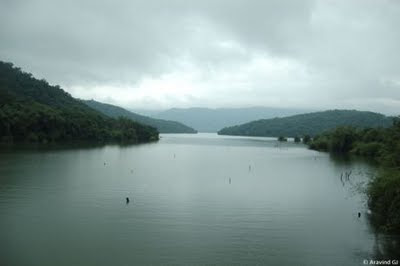 I was happy to see my car in good shape!!

Final Words:
The fate of Devakaar has already decided. It is just a matter a time that people move out and the area comes under Kaiga. 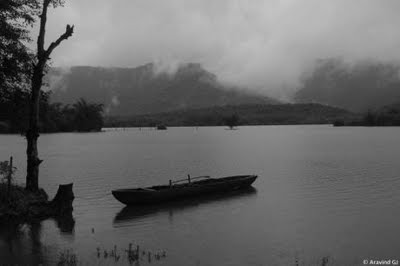 Latest news:
Due to the threat from terrorists on our Atomic plants, areas surrounding Kaiga are now guarded by CISF and army. The recent mishaps and radiation leaks in Kaiga has resulted in increase in security. There is a high chance that trekkers(or any outsiders) may be denied entry into Devakaar.