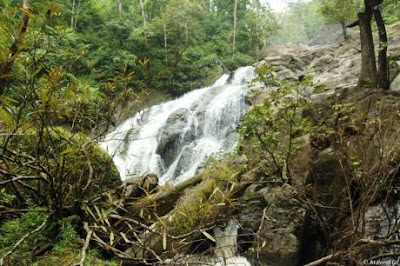 It was not a nice feeling to get up early in the morning. The weather was gloomy with rains lashing all over the night. But the fact that we were supposed to be ready for the trek to Nagajhari falls at 6:30 in the morning made us to wake up early. But the guide who had asked us to be on time was missing. He had taken a group of tourists for a wildlife safari!! With nothing much to do, we went to sleep again. 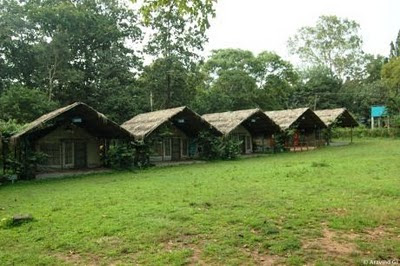 At 8AM, the rains had subsided, but still there was no sign of the guide. We reverse our earlier decision to forgo the breakfast (for starting the trek early) and head to the dining area. The guide arrives when we were in the middle of our breakfast!! Now, it was his turn to wait!! Finally, we start our trek at 9AM. 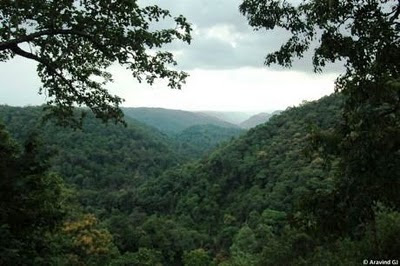 About Nagajhari falls
Nagajhari falls is in the Dandeli wildlife sanctuary. The trek starts from Kulgi Nature camp near Dandeli and takes about an hour to four hours depending upon the route. Permission from Forest department is a must as the waterfalls is inside the national park. 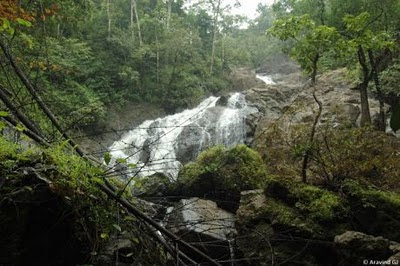 The trek
I wanted to trek on the easiest and quicker route as I was not in a mood for any strenuous walk. But the guide decides otherwise and takes us on a long route. We were also joined by a couple who were staying at Kulgi camp. Initial part of the trek was through the forest where we had to continuously get down into the valley. We would have walked faster but were slowed down by the couple who were trekking for the first time. 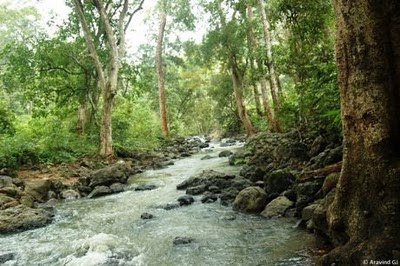 After walking (and also resting!!) for an hour, we reached a small stream. Another half an hour of trekking brought us to the confluence of two streams. We now had to walk along the bigger stream which would directly take us to the waterfalls. The stream had to be crossed at several places. The high water levels made the task little difficult. The couple was finding it extremely difficult. Added to their (and also ours!!) woes, were the leaches. There were plenty of them and had no mercy. Surprisingly, I was not attacked by leaches but ticks took a heavy toll on me (and only me!!). Tick bite results in more irritation than leaches. 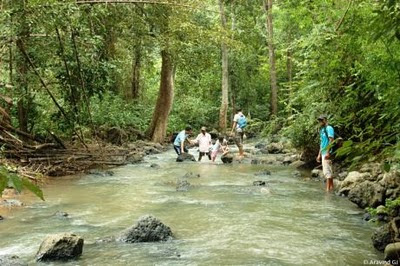 After trekking for 2.5 hours, I reached the waterfalls. Being a three stage waterfall, only the last stage was visible. I climbed the rocks to view the first two stages. The rocks looked scary but I could climb without much difficulty. Slowly others also reached the falls and started climbing over rocks. 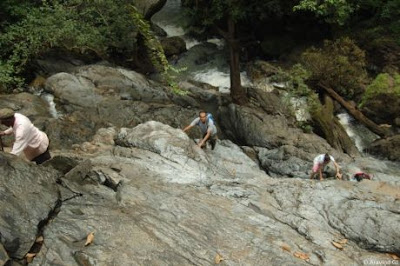 Then suddenly I heard the lady shouting. Her husband who was trying to climb the rocks was struck at a point and was unable to move. Alarmed, I rushed to the spot. I was bit shocked when I looked at them. Their face was full of panic. I was expecting some disaster but the situation was not that bad. The guy has developed shoulder cramp and was not able to move his hand. So, he was struck at that place. Slowly, we put him in a safe place and asked him to relax. 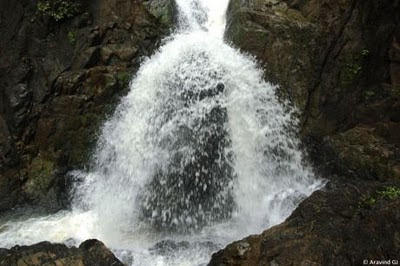 The reason for developing cramps was simple. He had trekked without having breakfast. Nor did he drink water along the route. But he did not forget to smoke!! What a combination!!!! We gave him some salt and asked him to drink water. They did not climb further. 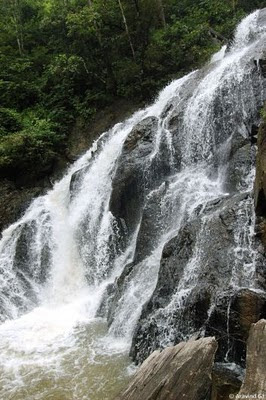 We spent a lot of time in the waterfall. The place was very peaceful with only sound of water. 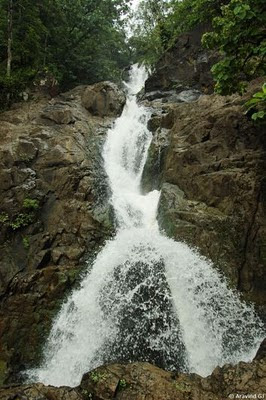 The return journey was on a different route. It was a Jeep route. Though the track was uphill, the trek was easy and fast. I also saw a group of spotted deer near the camp. Spotting wildlife in Dandeli is not so easy and I was surprised to see the deer so near to the camp. 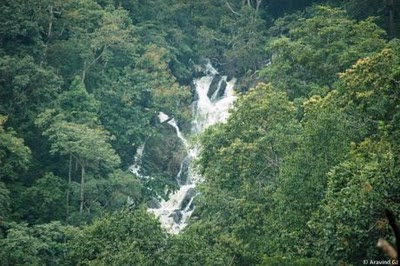 Waterfall as seen from the Jeep track