28th September 2009
Ulavi is a small town in Uttara Kannada district of Karnataka. Located in Western Ghats, it is one of the important religious places for the Lingayat sect in Karnataka. The Channabasaveshwara Temple here attracts a lot of devotees. The nature lovers are allured to this place due to the group of caves in the nearby forest. While most of the caves are located in a single area, few of them are far away from civilization. 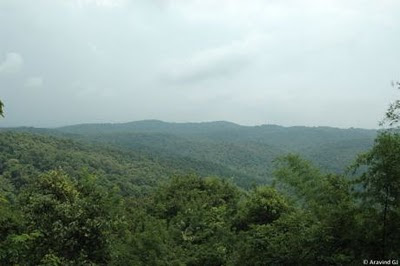 Travel
There are only two roads in Ulavi. One road enters into the town and the other road lead to the caves. 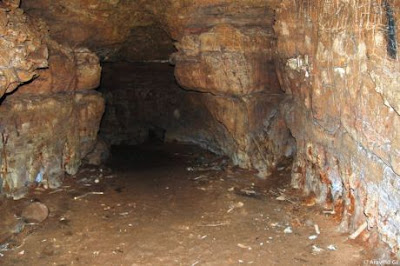 We traveled for couple of km from Ulavi to reach a junction. A car cannot go any further and we had to walk the rest of the distance. The wide tortuous track continuously goes down and ended at a cave. By then, we would have walked for about 30 minutes. 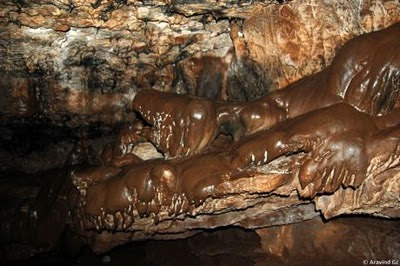 The bones of some animal in the cave alarmed us. We shouted for few minutes to make sure that the cave is not home to some carnivore. As we entered into the dark cave, we were astonished by the formations of the cave. Crawling further into the cave we found that the formations only became better. With the cave was being extremely narrow and slippery, we could not muster enough courage to go further. 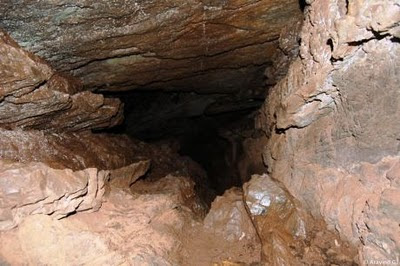 After this cave, there are steps that lead to the other caves. The path was slippery and we lost count on the number of time we fell down. We could see caves everywhere. It was at this point, we rued our decision on not taking any guide or local. The place was completely isolated and we were not sure whether the cave was home to some animal or not. The experience of waking up a sleeping carnivore would not be a good one. So, we were cautious in our approach to the caves. 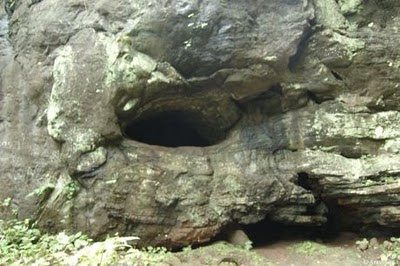 Moral of the story:
Take a guide along with you while visiting the caves, especially during monsoons. In summer months, I am sure that there will be big crowds visiting this place. No animals would like to stay so near to human presence. Very few people visit this place during monsoon. 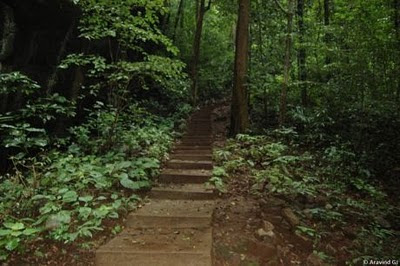 Also, do not forget to take a torch with you.

Back to the caves:
One important cave that we went inside was “Vibhooti Kanaja”, which means a place where sacred ash is stored. This is the structure formed by lime stone. 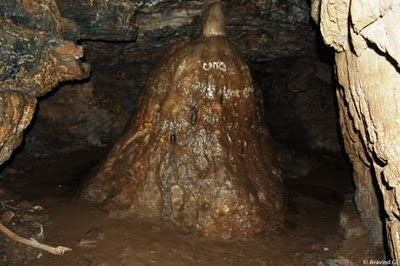 There were other caves like Akka Nagammana gavi and Rudrakshi Mantapa.

The last and the main cave was Akala gavi. As the cave was at a higher position, an iron ladder is placed to climb. The cave is part of a massive rock formation of several hundred feet. 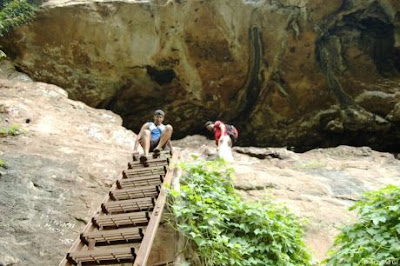 Lunch time:
It was 2:30PM when we returned back to Ulavi town. The Temple provides free lunch but since we did not visit the Temple, we thought that it would not be ethical on our part to just go for lunch. Also, the Temple was closed. But none of the hotels had food ready and we were asked to go to the Temple for lunch. When we tasted the food at the Temple, we knew that we did the right thing!! It was superb.

The Temple itself is a decent place to visit.

Last words:
We could not visit few caves which were very much interior in the forest. I was thinking of staying a day in Ulavi to visit them. But locals suggested that the caves would be out of reach during monsoon months. So, we had to drop the plan of visiting other caves. 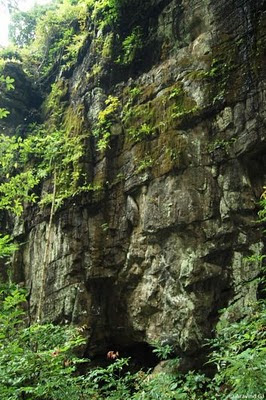 There will another visit to Ulavi to explore few more places!!