The term “Char dham” refers to the four most important Temples in Garhwal region of Uttarakhand. Located in the Himalayan region are the pilgrim places of Yamunotri, Gangotri, Kedarnath and Badrinath.

Though my Mother had seen most of the pilgrim towns in North India, the “Char dham” areas were not visited. I was planning to send her with my relatives. As it never materialized, I took the matter in my hands and decided to accompany her. The places are at high altitude and taking my two year old daughter was not a good idea. So, my wife and daughter give a miss to the trip.

Pilgrim season:
· No season: From November to May. These places will be covered by snow and the entire town along with deity move to lower areas. No one except some sadhus and army people visit these places during this time.
· Peak season: May, June. The Temples open during April/May and people from all over India visit the Temples.
· Off season: July – Mid September. It rains heavily in hills and roads may be blocked by landslides. Very few people prefer to visit at this time.
· Season: Mid September to October end. The rains have just ended and people again start coming. But the rush is less compared to May/June. The Temples close few days after Deepavali.

I should have chosen the “season” period but instead went during “Peak season” apparently underestimating the crowd. And crowd this year was unprecedented. The reasons were:

· Kumba Mela just got over at Haridwar. People who were roaming on the streets of Haridwar flocked to the hills.
· Due to “Adika maasa” (additional month), the Temples were opened one month late.
· Akshaya Tritiya time.
· Schools will start during June. So, people wanted to complete the trip before that.

The result was traffic jams on the road and long queues at the Temples. But all these difficulties are forgotten by the sheer sight of Himalayan Mountains!!

Details of the trip in subsequent posts.

Below is the photo of Lotus Temple in Delhi. We had few hours of time in Delhi and instead of sitting idle in the room, decided to give a visit to this place. 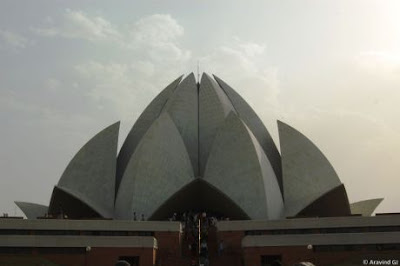