16th May 2010
Prologue
This was an experience that I can never forget but at the same time I would not like to go through the same again!!
Warning: This is a long post!!!!

About Yamunothri
As the same suggests, Yamunothri is the place of origin of Yamuna River. It is about 10,400ft above sea level. It is at a distance of 225km from Hrishikesh. The altitude of Hrishikesh is about 1100ft ASL. 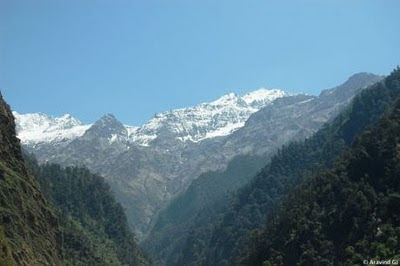 Travel to Barkot
Our start from Hrishikesh was delayed due to permit process and other stuff. It was 3PM when we started and we had 175km to cover to Barkot where our stay was planned.

As we crossed Hrishikesh we were on the hills. Within an hour we were at Dehra Dun, the biggest town in that area. From here, it is a steep climb to Mussorie, a famous hill station. Mussorie was a letdown as it looked like any other hill station. Winters might be different. 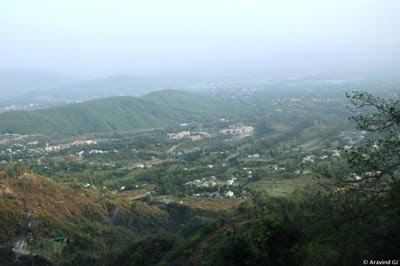 The road after Mussorie was completely downwards. We passed through Kempty falls, a tourist infested area.

The road further was less frequented by tourists. The road was narrow with landslides at several places. 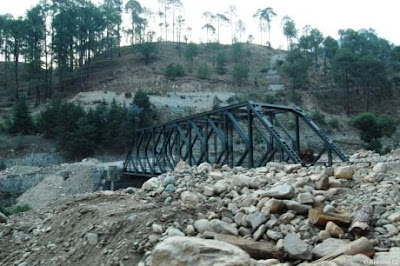 At Barkot
We finally reached Barkot at 11:30 in the night. The Hotel we stayed was ‘Chauhan Residency’, a nice hotel according to local standards. For me, it was a luxury as I was only expecting some basic rooms in the remote hills of Garhwal. 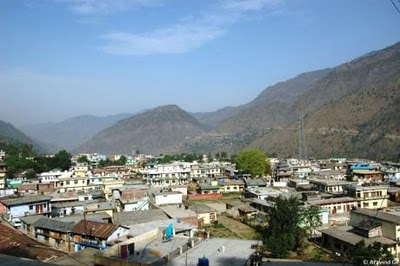 It was 1AM by the time we finished our dinner and hit the beds. I didn’t even know when I slept and only got up by the sound of the alarm. It was 4AM!! Time to get ready for a long day at Yamunothri.

Start from Barkot
At 5AM, we started from Barkot. The vehicles can go till Janaki Chatti(which is about 45km from Barkot). The rest of journey till Yamunothri must be covered either by foot, Dholy or Phony (Horse). The distance is about 6km uphill path. 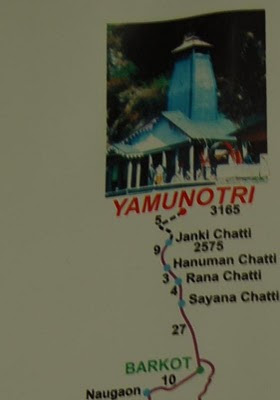 The journey from Barkot was along Yamuna River. We passed through the villages of Sayana Chatti, Garuda Chatti and Hamunan Chatti. It was the opening day at Yamunothri and the crowd was expected to be large. 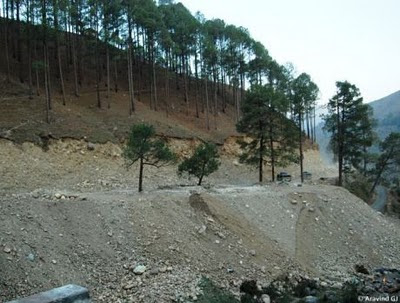 The drive was slow after Hanuman Chatti due to the steep climb and traffic. Three km before Janaki Chatti, the bus came to a complete halt. The watch showed 8AM. 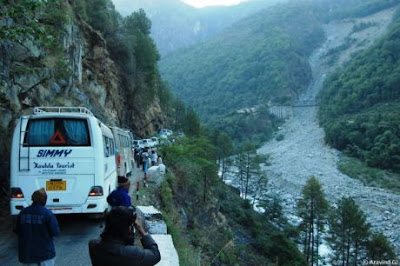 Traffic jam and walk to Janaki Chatti
The traffic condition did not improve and we had our breakfast in the bus itself. People from other vehicles started to get down and walk. So, we decided to do the same. There was a short cut and most of us took it. My Mother found it difficult but managed to move on. 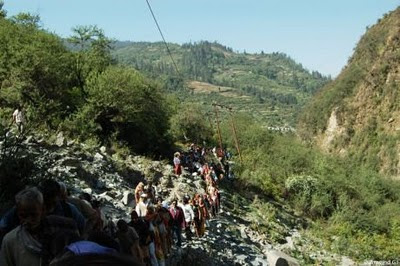 After about one hour of walking, we reached Janaki Chatti. Due to the knee pain, my Mother cannot walk for long distances and hence we had decided earlier that she would be taking Dholy (A chair carried by four people) while I would climb on foot. 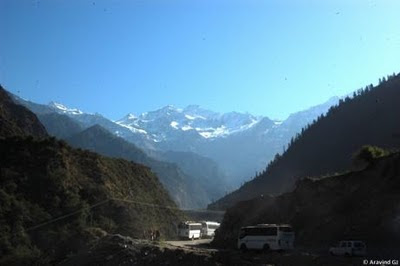 Janaki Chatti
But the situation at Janaki Chatti was completely different. The crowd was so high that there were no Dholies or Phonies. All of them were taken by the pilgrims who had started earlier in the day. I found one Dholy for which they were charging whopping Rs 12,000/- (Normally it is Rs 1,500/-). This was beyond our imagination. 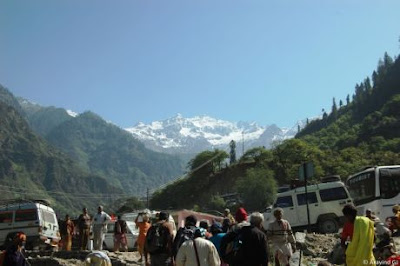 My Mother was disappointed that she cannot visit Yamunothri after traveling thousands of km from Home. She asked me to visit the Temple while she would wait at Janaki Chatti. That was not feasible and not practical, I told her. Either, we both go or both sit. I did not want to leave her alone in that small village and climb. 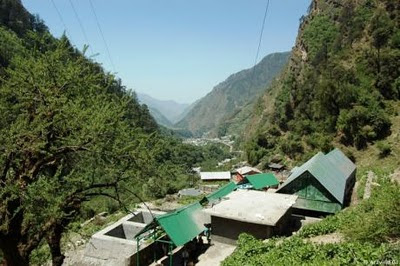 Our Organizer arrived at that point. He asks me to climb while he would take care of my Mother. There were other people in our group who cannot walk. So, my Mother can stay with them. The organizer assured me that in case if he finds a Dholy of Phony, he would arrange it for my Mother.

Trek starts
I was bit reluctant but started by climb. The initial part of the climb was easy. The path went along Yamuna River. With the icy mountains of Bander Pooch visible all along the way, the walk was pleasant. It was a concrete trail with railings on the side of the river. All along the way, there are toilets, water points and shops selling food. 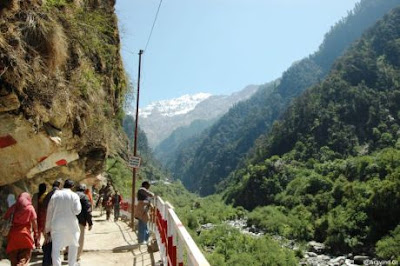 I had covered a km when I saw my Mother and an elderly couple (from our group) coming on horses. I waved at them as they passed ahead. Horses go fast.

The climb was steep but I did not find it tough as the weather was cool and I had no luggage. Within an hour, I had covered four km and had reached Bhairaveshwara Temple, a place two km before Yamunothri. Things looked great and I thought that with the current pace, I can visit Yamunothri and reach Barkot before 5PM. 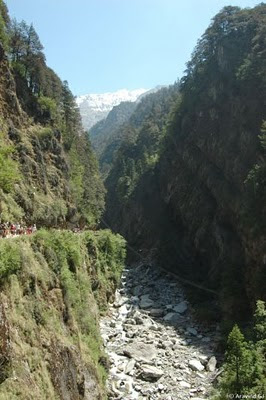 Shock of the day
What I never took seriously was the word “Beed” (Crowd) that people who were getting down were telling.

I looked towards the Bander Poonch hill from Bhairaveshwara Temple. The trail from the Temple was extremely steep. I did not worry about it. What really bothered me was the path was completely filled with people. And more importantly, they were not moving!!

It took me few moments to realize that it was the queue to the Temple. Two kilometers of queue and complete traffic jam!! This was much more than I ever imagined.

Usually in such conditions, I prefer to return back (and in fact many people did it that day). I never have the patience to stand in a queue. For me, Yamunothri was a destination and more important was the journey that I had taken till that point.

Struggles
But I still continued. The reason was that my Mother was on a horse and I thought that it would be good if I stay with her.

The queue was horrible. It never moved an inch. What made the matter worse were the horses that were standing on the path thus blocking the way for people to pass. They were all along till Yamunothri. They could not move any further and were just standing. Everyone was pushing others and there was no way for the people to get down. Neighing of the horses was terrible and it looked like they may run away at any time.

At one point of the time, it looked like stampede was imminent with everyone being sandwiched and screaming of people. One person lifts his two year old kid above his head so that the child would not be suffocated. It was a scary scene to watch. I felt bad to be in such a situation. Why the hell I choose the Temple opening day for Yamunothri?

At one time, the entire area was engulfed in mist and started drizzling. But it never rained. 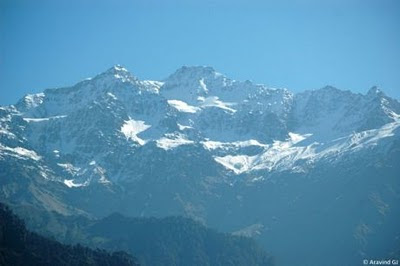 It was a shame that administration was completely absent in such a situation. There must be few lakhs pilgrims that day in Yamunothri and can you guess the number of Policemen deployed there on the route?

Only 2 and they did not know what to do!!

Luckily, people started realizing that just pushing and shouting is not serving any purpose. They tried to form a single queue so that the people in the opposite line can move. The situation improved slightly and the queue started moving, though very slowly.

The place where the Temple of Yamunothri is situation is not exactly the source of the River. The real source is high in the glaciers of Bander Poonch about 20,00ft ASL. There is also a hot water pond near the Temple. 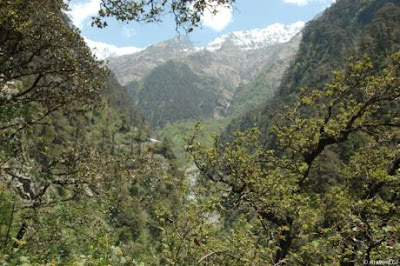 Getting down
I could not find my Mother anywhere and I started getting down. The journey was slow due to the traffic and here I saw my Mother climbing up. I had overtaken her at some place while walking up!! Halfway, the horses could not climb further due to traffic and she had started walking. Since the crowd situation was still worse, I wanted to ask her to return back with me. But she was climbing up with enthusiasm and I did not have the heart of asking her to abort the climb and return back. There were few other people from our group with her. So, it was OK. 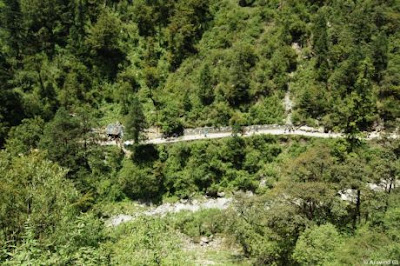 It was a slow descent and once I was out of traffic area, I started running down. While climbing up, I had seen a place where the river flew just next to the trail. It was a nice place to just sit and relax. Jumping into water was ruled out as the water was extremely cold but I could just put my legs in the water and enjoy. 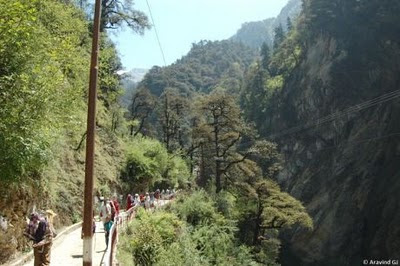 The time was 4PM.

Back at Janaki Chatti and another adventure
Next 150 minutes was spent waiting for my Mother. How I spent, I would not like to explain. There were some anxious moments. Finally, she cam at 6:30 in the evening. She had darshan and was happy. Seeing me, she jumped from the horse and announced that she would never climb on a horse in future. It was a scary experience for her. It was indeed true as I had seen few horses falling down on the ground for some reason along with the person on its top.

We had some tea at a shop nearby. Though we did not have lunch, we were in no mood to eat anything. We had to walk for another 30 minutes to reach Janaki Chatti.

In the morning, the organizer had told that the bus would come till Janaki Chatti bus stop. I did not see the bus or the organizer. I did few enquires and came to know that the traffic jam was never cleared and all buses were at the place where they stopped in the morning. 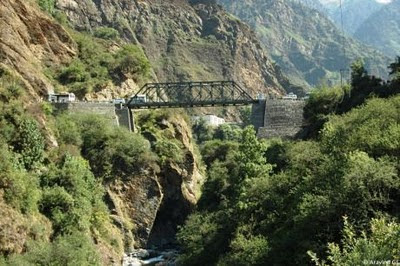 That meant we had to walk for 3 more km. It was completely dark by then. We were the last people as all others in our group had got down much before most of them without making it to Yamunothri. A simple task was to make a call to the bus guy and find out where they were. But the area was out of mobile coverage. I suddenly felt like the clock had turned back by ten years!! 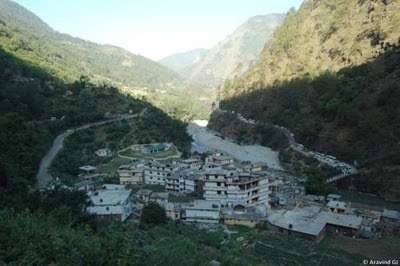 The journey was slow as we were tired and had to check every bus on the way. Darkness made our task even tougher. My Mother was worried what if the bus had already left. I didn’t like to think about it and just kept moving.

We must have walked for nearly an hour. There were only very few vehicles on the road and it looked like we had to spend night "somewhere".
I finally found a flashing light of a torch and it was our organizer. Both of us breathed a big sigh of relief. The people were waiting for us.

The journey till Barkot took a long time. We reached the hotel at 11:30PM.

Epilogue
I mentioned earlier that I would never like to have this experience repeated again. But it is these kinds of experiences that make one remember the trip for long.