As the name says, Gangothri is the origin of River Ganga. A Temple dedicated to Ganga is built there. But the “real” origin of the river is at Gangothri glaciers at Gomukh, 18 km from Gangothri. While the vehicles go till Gangothri, one needs to trek to visit Gomukh. 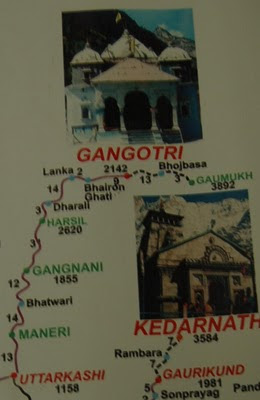 From the experience of Yamunothri, we had started at 4 in the morning. If you are not driving, there is little to do at that time. Naturally, I dozed off the moment I boarded the bus.

The scenery outside was something I could not believe when I woke up at the break of dawn. Bhagirathi River was flowing few thousand feet down the perpendicular valley and the road was passing cutting the rocks. It was both amazing and scary. The road was so narrow and I was wondering how vehicles coming from opposite side can cross each other. 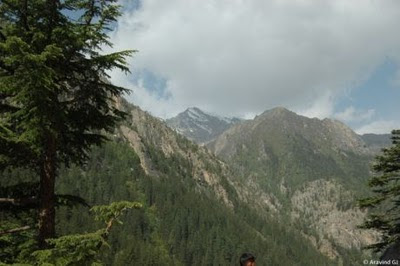 As I was thinking about it, a lorry came from opposite direction!! It was a scene to watch the drivers using all their skills in such conditions. On peeping outside the windows all I could see was the river and not the road!!

The road to Gangothri was the narrowest and the scariest road in my entire trip of CharDham. There was absolutely no road at some places. 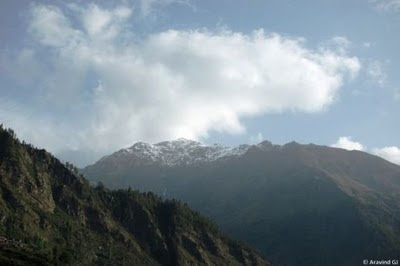 The road went up to a place called Gangnani and then continuously came down by few thousand feet to the level of the River. Here was a small town Harsil. 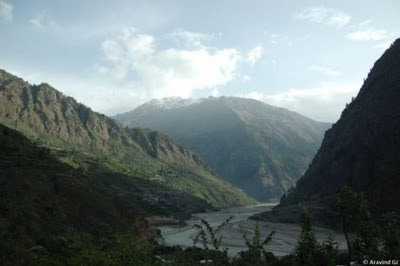 If I can recall few great places to see, Harsil is definitely one among them. Situated next to Bhagirathi River in a valley surrounded by snow capped peaks, it is something I cannot express by words. 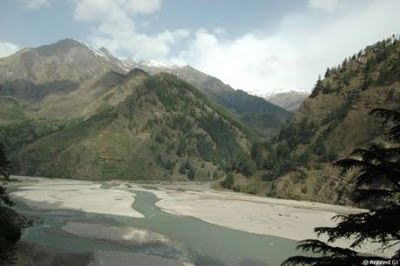 The town is a major base for the army. Army camps can be seen on the side of the River.

We had our breakfast at Harsil.

The road climbs up after Harshil. We reached a small village Lanka and then crossed Bhagirathi River to reach Bhairongati, the last village before Gangothri. The Gangothri National Park starts from here. The bridge across Bhagirathi is an engineering marvel. The water flows few thousand feet below the perpendicular valley and the bridge is constructed above it. Amazing!!

The bus stopped few km before Gangothri. Traffic jam!! Knowing that it would never get cleared, we started walking. Gangothri was still 3.5 km away. It was a plain walk on the road with very little change in elevation. 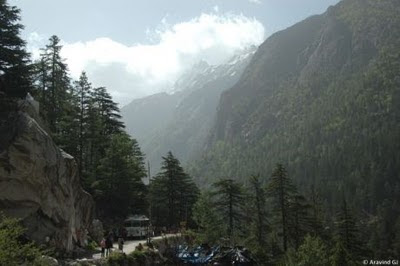 After walking for about an hour, we reached Gangothri. It’s a small place with very less parking place for vehicles. The road itself is narrow and the vehicles must be parked on the road. (No wonder there is a traffic jam!!)

We walked on the narrow lanes lined with shops for 500mt to reach the Temple. There was a big queue but the situation looked better than Yamunothri. But even after standing for 30 minutes, the progress was slow. People were breaking the lines to enter the queue. This was not a good thing and I was annoyed a lot. I didn’t like the idea of waiting for 4-5 hours for darshan. It was when I got information that special tickets were given for quick darshan. Asking my Mother to stand in the queue, I barged into a counter for tickets. The tickets were only given at certain period of time and I was at the counter exactly in that window period.

The rest of the story was simple. We had peaceful darshan in another 30 minutes and went to the river. It was very cold and jumping into the water was not in my mind. 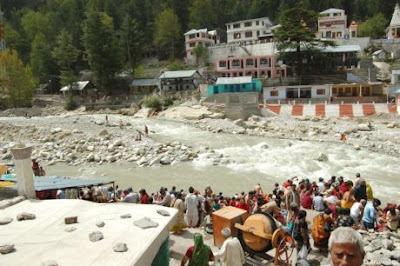 We also visited a small waterfall nearby called Gowri kund. 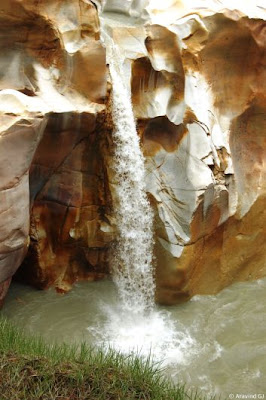 We were back in the bus and finished our lunch in the bus itself. At 3PM, we were all set to start!! 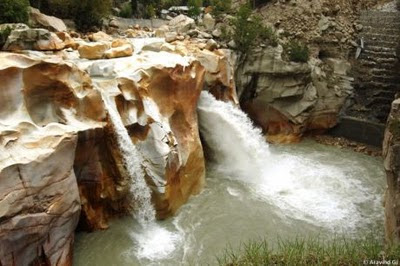 The traffic jam was so bad that for next 2 hours, vehicles did not move an inch. The vehicles on the other side looked like a train!! It was a sad sight to see people struck in such places. We were lucky to have walked only 3 km.

It was dark by the time we crossed Harshil. The scary roads were ahead which made me uncomfortable. In every village, vehicles were parked and people were sleeping in the vehicle itself.

We finally reached UttarKashi at 11 in the night. It had taken 10 hours to cover 100km.