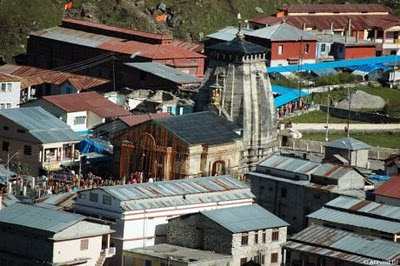 About Kedarnath:
Kedarnath is an important pilgrimage center for Shiviates and is also the remotest of char dhams. Situated at an altitude of about 11,500ft, Kedarnath is highest of char dhams. The journey to Kedarnath requires a trek of 14 km from Gaurikund which can either be covered by foot, horses or dholies. Recently, helicopter services have been started by Pawan Hans. The tickets for the helicopter service can be booked online. 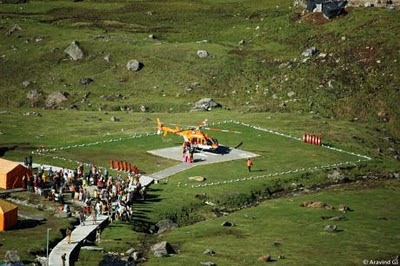 Our journey:
We had stayed at Srinagar and had to travel 100km to reach Gaurikund. Traffic jams had become a nightmare and I had developed a bad habit of looking out on the road at each turn for any traffic jam. A clear road would make me relaxed, until next turn. 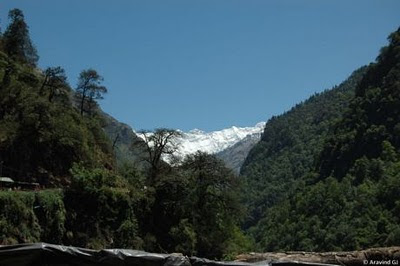 Kedarnath was the place that I was longing to visit and I did not want to miss it for any reason.
There was no miracle on the road that day. The bus stopped on the road 8km before Gaurikund. That was pretty bad considering that we had to walk for 14 km from Gaurikund and reach Kedarnath by sunset.
Memories of Yamunothri started to haunt me. It was 9:30AM.
The bus had stopped at a place called Sitapur. Few people in our group refuse to walk and decide to stay at Sitapur. I was sure that it would at least take 3 hours (with my Mother) to walk to Gaurikund. What if we face situation like in Yamunothri where there were no dholies? My Mother was very clear that she would not go on horse at any cost.
We had travelled thousands of km and to turn back at this last stage was not a good option. We started walking. In worst case, we would have to return from Gaurikund.
After walking for more than an hour, we reached a place called Sona Prayag. Gaurikund was still 5 km away.
As the road further was very narrow, vehicles were allowed in only one direction. That should have contained the traffic but unprecendented crowd had messed up everything. It situation was so bad that vehicles were simply not allowed after Sona Prayag.
It was here few people struck a “deal” with Police and a Jeep guy. That made things easier as the Jeep took us to Gaurikund on that empty road!!
Gaurikund was a small place with narrow streets. We walked about half a km to reach the starting point of the trek. 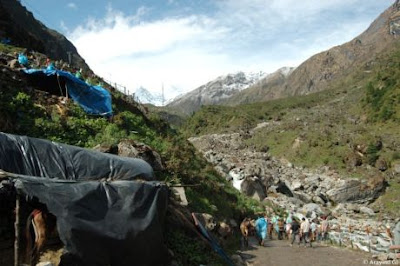 It was here I was convinced that we can make it to Kedarnath before sunset. 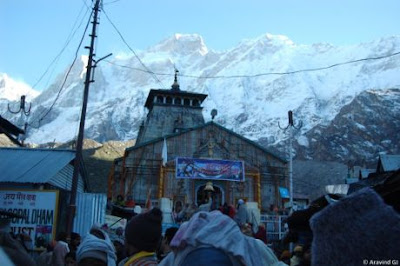 Unlike Yamunothri, the dholy system was very well organized in Gaurikund. People have to stand in queue and buy dholy tickets. The ticket price was decided based on the weight of the person. It was surprising to see computerized system working so nicely in that remote corner with huge crowd. 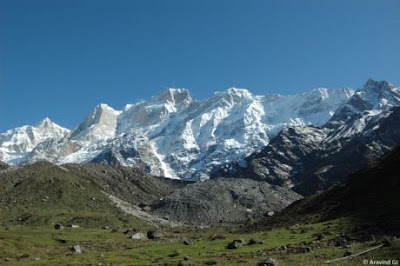 With my Mother getting a dholy, we started our journey. The path was steep as expected. We had to gain an altitude of 5000ft to reach Kedarnath. While the path was bad when compared to Yamunothri, the facilities were much better. Drinking water, toilets, eateries and rain shelters was present all along the route. There were places for horses to drink water. 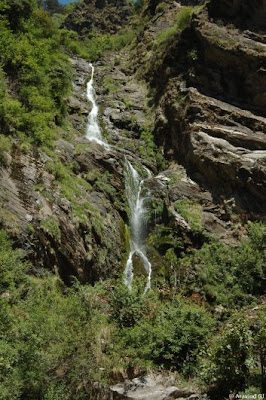 Walking was difficult thanks to dholy and horse people who were rushing without bothering about people who were on foot. One had to always jump to the side to give way for these fast movers.
Seven km from Gaurikund was a small village Rambara. Here we stopped to have lunch. By then the entire area was covered with mist and it started to rain. We still had a long way to and hence did not stop for rain to subside. We had raincoats. 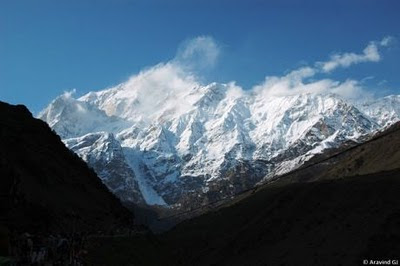 The rain stooped after a while and a grand spectacle was thrown open. It was the view of the snow capped mountains. We had already seen the Snow Mountains at Yamunothri and Gangothri but the view at Kedarnath was simply great. The journey became easy looking at those mighty mountians. 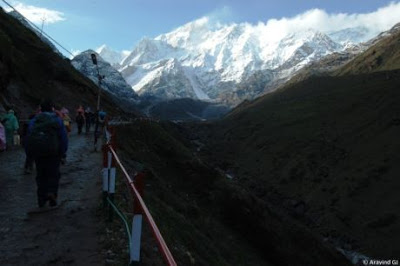 The last km of the journey was on a flat land. Maharashtra Mandal, our place of stay was at the entrance of the town. The room was very basic. One must not expect luxuries at these remote places that are open for only six months. 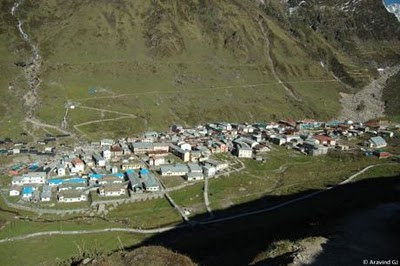 Our agenda on that evening was to visit Kedarnath Temple. It was a peaceful visit with no hurry or rush. The miniature version of the mountains behind is being worshipped in the Temple. 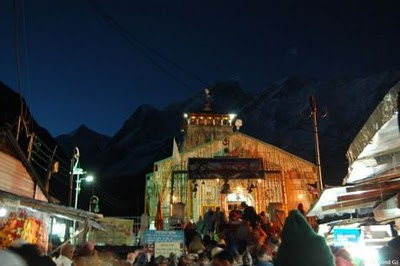 All char dham Temples are small with no great architecture. This kept me wondering what makes these Temples so attractive to people all over the country. At least, we now have the luxury of travelling most of the distance on bus. Just a few decades ago, people had to travel on foot for several days to reach these places. 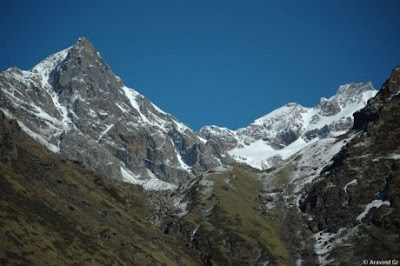 We paid a visit to Shankaracharya Samadhi on next morning. With no people around, there was an absolute silence. A great man who in his short life span of 32 years covered the entire length and breadth of India on foot spreading “advaita” and establishing math of religious significance. 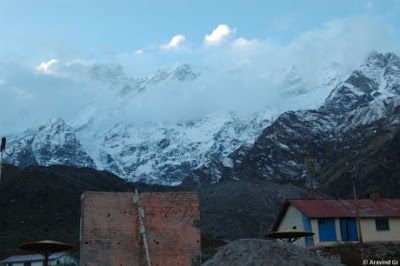 Bhairaveshwara Temple on top of a mountain attracted me. As it was a steep path, my Mother did not accompany me. I could get some good views of the mountains and the town as I started climbing. 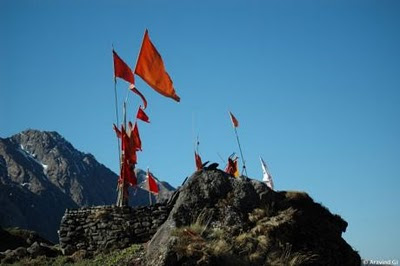 I was the sole visitor of the Temple at that time. The Bhairava people staying near the Temple looked scary. I had heard about their love for “ganja” and similar stuff. Needless to say, I didn’t stay there for long. 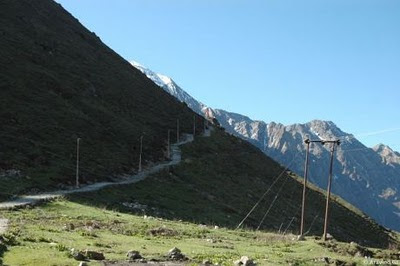 Afer breakfast, we started the descent. Compared to previous day, the weather was hot and hence tiring even though it was just a decent. 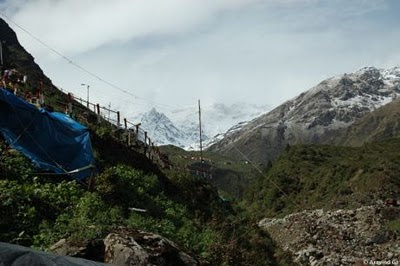 We had to wait for about 2 hours at Gaurikund. Again a “deal” was done with a driver of an empty vehicle who then dropped us at the Hotel in Sitapur. 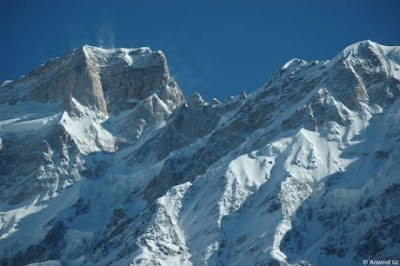 Other Things to do:
If stayed for couple of days in Kedarnath, there are few high altitude lakes that are worth a visit like Vasuki Tal. Triguneshwar Temple near Gaurikund should be good. Tunganath, one of the Panch Kedar and highest Temple in the world may be interesting.