Driving four wheelers is my passion, preferably on good highways. But driving on Indian roads is nightmare many a times. Sometimes the roads are bad and if they are good, speed brakes are constructed!! The stretches of Golden Quadrilateral are good but one has to be always vigilant about the people suddenly jumping into the roads, cattle carelessly walking and even more careless lorry drivers.
The roads in abroad looks cool and I always wanted to drive once. I first chance that I had been when I went to US several years ago. But unfortunately, I had not learnt driving at that time and had to content with the position of a navigator. The first thing I did after coming back from US was to learn driving and get a license!!
But I never got a chance to visit US again!! My abroad visits were to South East Asian countries. The countries were small, public transport was great and people were discouraged to use cars.
My wish got materialized when I went to Netherlands couple of months ago. I got visa at the last moment and didn’t had time to get an International Driving License. Anyway, I had taken my Indian driving license.

I was pleasantly surprised when I came to know that driving license issued by any country for the period of six months. And like in US, renting a car was a simple affair in Europe.
The major difference in driving is that Europe follows right hand traffic while India follows Left hand traffic. This means that the driver seat and the steering is on the left of the car and we have to drive on the right side of the road. This causes confusion for the person driving for the first time in right hand traffic. The common mistakes people (including me!!) do are:
- While taking left turn, go to the left side of the road. This is quite dangerous as it will surprise the native drivers who always follow rules. I did not do this mistake!!
- While changing gear, left hand first moves up. Only then we realize that right hand has to used for changing gear.
- Turning wiper on instead of direction indicator.
But in general, driving in Europe (or in US) is easy compared to India. Roads are good and people always follow rules. One just needs to stick to his lane and drive!!
Normally, people drive on small roads with less traffic to get confidence before moving to motorways (Expressway). I had very little time to go through that process. I started my driving directly on a motorway!!
One advantage of driving cars on rent is that every time you get a new car!! The downside is that you should get adjusted to drive a new car each time. Some cars come with lot of automatic stuff. From my experience, the more the more the automation, the more difficulty to use them!! Some situation that I(along with my friends) faced is:
• For the first weekend, we went to the car rental at the last moment. There were no cars to spare and so the lady offered to take an expensive diesel car. Since that exceeded our budget, we asked her to look at some alternative options. Finally, she gave us a Citroën car which was due for a service. 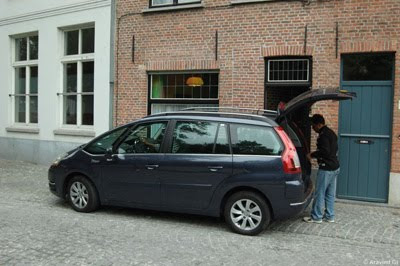 When it was time for refueling, we were bit puzzled what to fill. We took the car in a hurry and did not know whether it was a petrol or diesel car!! I opened the car manual only to see that everything was in Dutch!! Puzzled on what to be done, we saw another Citroën coming in. The owner of that car was sympathetic to our problem and told that it is a petrol car. We could have solved it ourselves had we opened the lid of the fuel tank. It was clearly written there.

• The Citroën we got had automatic gear system. Since we were using an auto gear car for the first time, it took some time for us to get adjusted into. There was no clutch and we didn’t know what to be done with our left leg only to realize that only right leg is required to control both acceleration and brake.

• Another car that we rented was Volkswagen Golf. It had six gears and the reverse gear was at the top left position (where the first gear is located in our cars). And the first gear was next to the reverse gear. While starting the car, we use to carefully make sure that we do not put the gear to reverse. In that process many times we ended up starting from 3rd gear!!

At one point where I had to take a reverse turn, I put the gear to reverse and tried to move. It started moving forward!! Thinking that I had not put the gear properly, I tried few more times. It never moved backward. I thought that there was something wrong in the car, but it was a brand new car. As I was trying various things, I saw that the gear can be pushed down. When pushed down, the gear could only move to reverse!! Simple mechanism to avoid accidental changing of gear to reverse gave so much pain!!

• When it was time for refueling our Golf car, I searched for the lever that would open the fuel cap. Even after searching several times, I could not find any!! Again, we had to take the help of a car owner who was at fuel station. The solution was just to press the cap. It would just come out!!

• The Citroën had a car navigation system. It was so advanced that we could never understand how to make use of it!!

Last but not the least was Tomtom car navigation system. Without which it would have been an impossible task finding out the route in big cities and taking the right exit from the motorway!!