31 July - 1st August 2010
The name Berlin always brought special feeling to me. Berlin was the epicenter of the Second World War. It was from Berlin that Hitler gave orders for the war and ironically this was the city that suffered the most from the war. The books I read and documentaries I saw fueled my desire to visit this historical city that rose from ruins.

Though the History of Berlin goes back to several centuries, it is best to take into account of the happenings from World War II. Hitler, the then chancellor of Germany who wanted to conquer the world started the attack on neighbors during 1939. The initial years of the war were very successful for Hitler. Eastern Europe, major parts of Western Europe and Russia (Till Moscow) came under the control of Hitler. But from 1942, the balance titled towards the allies. Germany started losing the territories it previously occupied. While western allies started invading Germany from western side, Soviet Russia assaulted from East. By end of the war, Germany was occupied by Allies on Western side and Russia on the Eastern side.

Berlin was very much deep inside Eastern Germany and was occupied by Russians. At the end of the World war, most parts of the Berlin were completely destroyed.

After the end of the Second World War, West Germany saw a dramatic growth and became one of the most developed countries in the world. The East Germany remotely controlled by Russia lagged behind in most of the parameters. The poor economic conditions and suppression of freedom resulted in people migrating from East to West Germany. The East German Government sealed the border to prevent the migration.

The “loophole” was Berlin. Cross from East Berlin to West Berlin and one is in a free country!! In order to avoid this migration East Germany built a massive wall along the boundary in Berlin in 1961. Soldiers with machine guns guarded the wall. This ensured complete halt in migration. Few people who tried to cross over were killed by bullets.

West Berlin became an island enclosed by wall on all its sides.

Nothing remains constant forever. In late eighties, communist Governments across the world collapsed. In 1989, there were demonstrations all over East Germany which finally led to the fall of Berlin wall. In 1990, the East and the West Germany was united.

Berlin is now the capital city of unified Germany. With a population of 3.4 million, it is the third largest city in Europe after London and Paris. Berlin is a perfect example for “rise from the dust”. 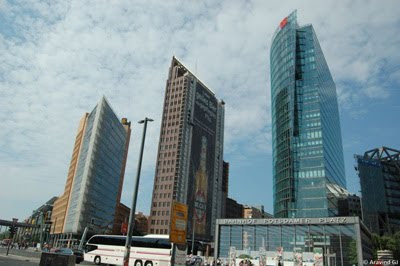 Five of us (I, Karthik, Vikram, Pradeep, Nikhil) started from Eindhoven at five in the evening. Once out of Eindhoven, driving was smooth as we were on an Expressway. German border was an hour drive but we didn’t even realize when we crossed into Germany!! Other than a small board on the side indicating that we are crossing to Germany, there is no other indication. Of course, the language in the sign board changes!! There are no check posts and no frisking of people by Police.
I was very much surprised by the open borders in Europe. In India, I remember the hassles we face when we just cross a state border. Like we cross districts in India, one can cross into different countries in Europe.

Info: Travelers to Europe are issued Schengen Visa which is valid across 15 countries in Europe.

We were driving on A2, one of the German Autobahn. While they are popular for “no speed limit”, the reality is different. Only a very few sections have “no speed limit”. Most sections have speed limit of 130km/hr. People tend to ignore the limits and drive at higher speeds. The maximum we could touch on our vehicle was 195km/hr and still Audis and BMWs were overtaking.

Roads were also closed for repairs at some sections, resulting on lower speed.

Berlin and our stay:

We reached Berlin at 12 in the night. We had taken about 7 hours to cover 650km which was quite good.

We had booked “Berlin Hostel” at the center of the city for stay. It was a budget accommodation with all facilities like free internet, parking and complimentary breakfast.

The first place we saw was Holocaust memorial of murdered Jews. The concrete blocks give a grim reminder of the tough days faced by Jews during Second World War. 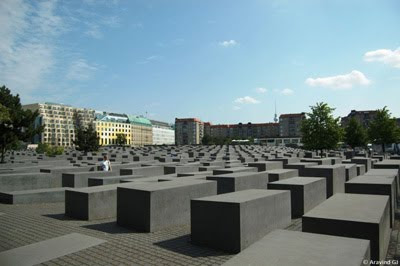 Next to the memorial is Brandenburg gate. It is the iconic symbol of Germany and only remaining entrance gate of old Berlin. It was here Ronald Reagan, US President gave his famous speech in 1987 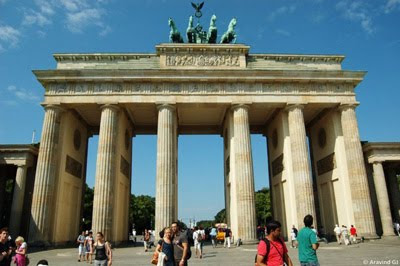 Opposite to Brandenburg gate was Reichstag building, the parliament of the German Empire. On top of the building is a dome which can be climbed. The entry was free but one had to stand in the queue for 2-3 hours. The heat was intense and we decided to climb in the evening. 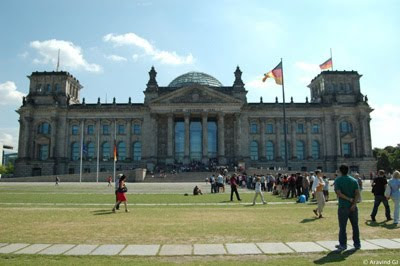 Some of us did not want to walk a lot. So, we took a city bus to visit various places of Berlin. It tooks us through various land marks of Berlin. 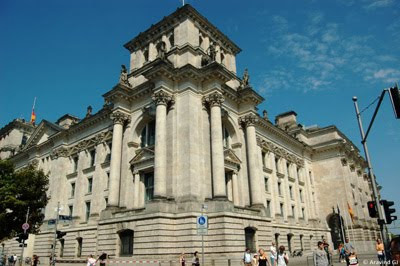 The house of German Chancellor. 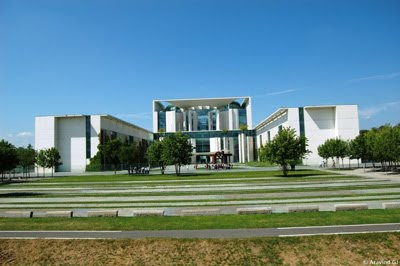 The view of the canal. 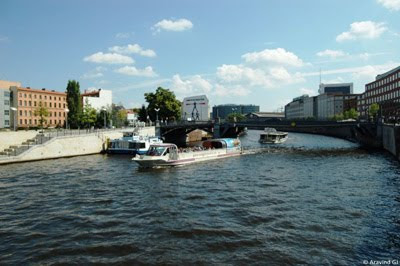 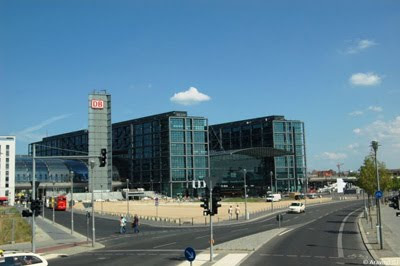 One of the important monuments in Berlin is Kaiser Wilhelm Memorial Church. This was severally damaged in bombing raid in 1943. The structure still stands as is with very little renovation. One can get a feel of the state of Berlin at the end of Second World War. 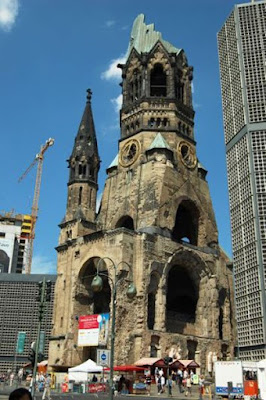 The name “Checkpoint Charlie” had raised lot of curiosity amongst us but it turned out to be small guard house in middle of a road. But historically, it has lot of importance. This was the crossing point between American sector and Soviet sector during cold war period. The place filled with Tankers is now a tourist hot spot of Berlin. 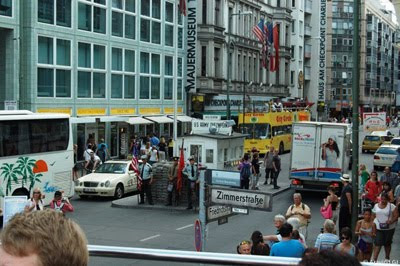 The last remains of Berlin wall is near checkpoint Charlie. 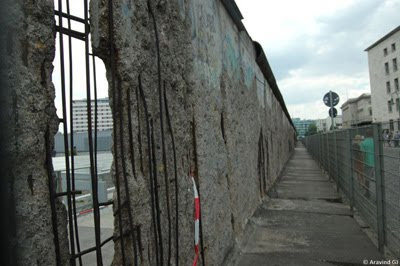 This is the place where once wall ran though!! 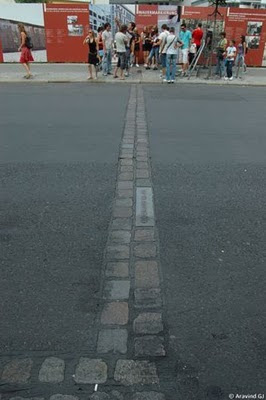 This place is also very near to Gestapo Secret Police head quarters. This is where the Hitler’s commands were executed. A new museum has been built at this site exhibits “Topography of Terror”. The pictures are extremely disturbing making one hard to believe that a civil society can get into such an inhuman behavior. I feel that these are shown to make sure such a dark era is not repeated again.
It takes quite a time to see this museum and more time to get back to normal world. 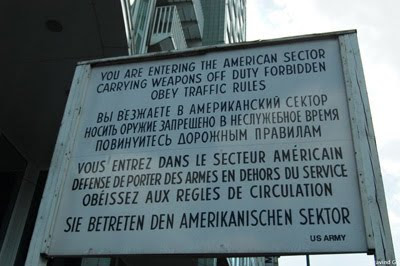 We also visited a TV tower of Berlin. 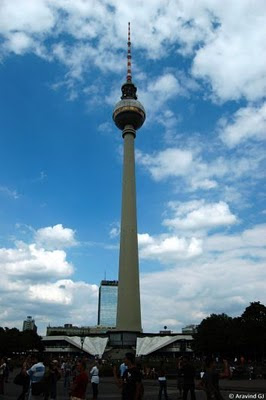 After doing quick shopping, we set towards Reichstag building to complete the unfinished task of climbing the dome. The crowd was less and the sun was less harsh. We had to stand for nearly an hour in the queue. The security inside was extremely tight and reminded of the checking in airport. 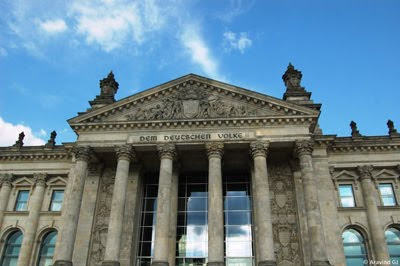 The dome itself is a nice place to view the city of Berlin. 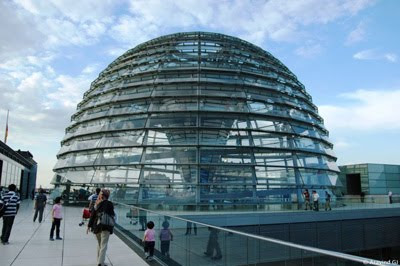 Next day, we went to the nearby town of Potsdam which housed some nice palaces. 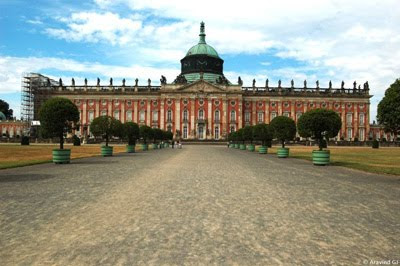 Berlin trip will remain for a long time in memory.