1st July 2011
The HPTDC bus promptly dropped us at Manali bus stand at 8:30AM. Our bus to Leh was at 11AM (Yes!! On the same day!!!!) And we had enough time to board it. The first task was to have breakfast. I suggested “Madras Cafe” which served some good South Indian dishes. I had liked this restaurant during my last visit to Manali six years ago. But the quality of food seemed to have come down these days. Anyway, this would be our last South Indian food in the travel!!
Our destination Leh is about 470 km from Manali. The road is normally opens from June to October every year. It passes through the high altitude passes of Rohtang, Baralacha, Nakeela, Lalchung La and Tanglang La. The journey normally takes two takes with a night halt either at Keylong, Jispa or Sarchu.
The route is:
Manali --> Kothi  --> Gulaba  --> Marhi  --> Rohtang Pass  --> Koksar  --> Tandi  --> Keylong  --> Jispa --> Darcha  --> Patseo --> Zingzing Bar --> Baralacha La --> Killing Sarai --> Sarchu --> Gata loops --> Nakeela --> Lalchung La --> Pang  --> Moore plains --> Tanglang La  --> Rumtze --> Upshi  --> Karu  --> Leh
﻿﻿﻿
﻿﻿﻿ Tourists undertaking the journey on this route have few options:
Taxi: Hire an exclusive Taxi for self or group at Manali. You can stop anywhere you like and reach Leh in 2-3 days. Approximate cost: Rs 15,000/-
Cannon ball: Shared Taxi that leaves Manali at 2AM and reached Leh late night on the same day. 9-10 people are stuffed inside the taxi and have very limited stops. Not suited if you are planning to stop/ enjoy the beauty. But it is the cheapest option costing you about Rs 1,000/-. The front seats are bit expensive!!
Bus: HPTDC runs buses every alternate day. It takes two days to complete the journey with a night halt at Keylong. The cost is Rs 2,000/- which includes stay, dinner and breakfast at Keylong. There are also buses run by private operators but HPTDC seems to be the best.
Many people drive their own vehicle or hire bike at Manali.
﻿
﻿ Our journey:
Hiring a taxi was a costly affair for us as we were only three people. Cannon ball was ruled out as the whole idea of our trip was to enjoy the beauty of the nature. In Ladakh, it is the journey that is interesting rather than the destination. We found that HPTDC started their bus service from 1st July and we promptly booked it.
﻿
﻿

The bus started at 11AM. It was the first HPTDC bus travelling from Manali to Leh and we were welcomed with garlands!! A nice start to an exciting journey.
﻿
﻿

Once the busy streets of Manali were left behind, it was greenery all around. The recent rains had covered all mountains with green. Our destination of the day was Keylong, 117km from Manali. Between them was the mighty Rohtang Pass. The road which opened a month ago had witnessed massive traffic jams in the recent weeks. All tourists coming to Manali wants to go to Rohtang pass to enjoy ice. The traffic situation went out of control this year and Government banned all non Himachal vehicles going to Rohtang pass. All this had happened a week ago. 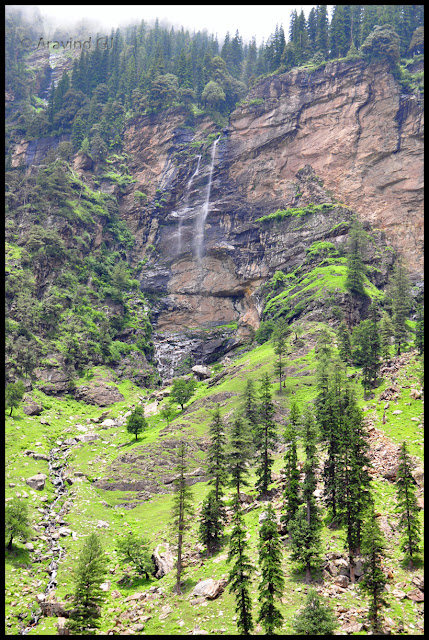 To our luck, number of tourist vehicles was significantly less on that day. We passed through Kothi check post (22 km from Manali) where Police stop the non HP vehicles. As we climbed up, the scenery only got better. There were waterfalls everywhere. Few of them were originating from melting glaciers and few others from mountain springs. The journey was incident free and we reached Marhi (40 km from Manali) at 1PM. It was time for lunch. Marhi is at an altitude of 11200 ft and is the last point where we get some decent food before climbing down the Rohtang pass. Lot of tourists had stopped at Marhi and had taken ponies to reach ice point. Marhi is also the place where paragliding activities are held. 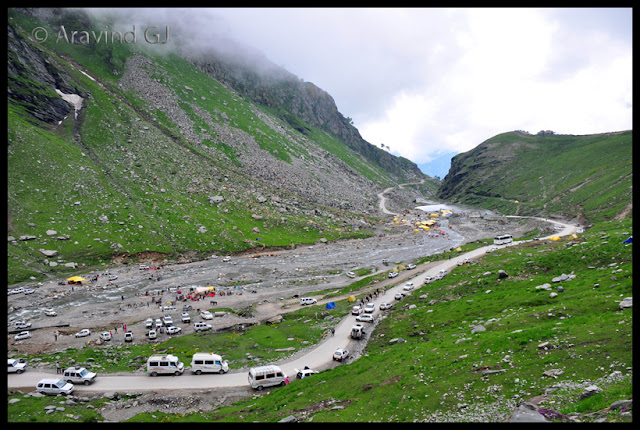 The road conditions dramatically changed after Marhi. The landslides all along the route resulted in slushy roads. Even a Xylo in front of struggled to pass through a bad stretch of road. People got out of the vehicle and pushed it. It started raining and visibility was greatly reduced. The worst affected were bikers who were struggling a lot to wade through the slush. At one hairpin bend, we had to stop for nearly 45 minutes to allow an army convoy of about 60-70 vehicles to pass. 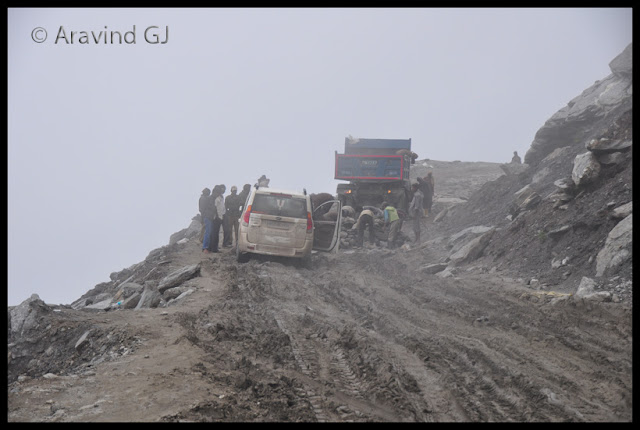 The road condition worsened as we neared the pass. We were near Rani nallah, the most dangerous section of the pass. Landslides had occurred and the JCB’s were trying to clear the road. Added to the delay was a lorry in front of us that broke down. The JCB had to come and push the lorry to the side to allow vehicles to pass. A swift in front of us tried to cross this risky section. Its underbelly hits the rocks and it stops in the middle. People in the vehicle are scared and decide to return back to Manali. The bus slowly crosses Rani nallah and then the road becomes slightly better. We reach top of Rohtang Pass at 5:30PM. It took nearly 3.5 hours to cover the last 11 km. 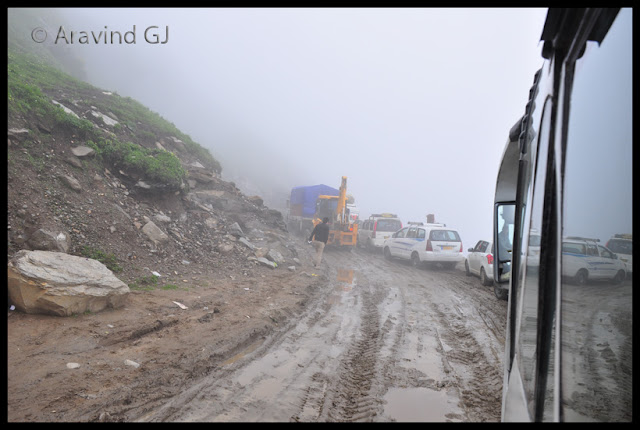 The effect of vehicles and tourists are clearly visible at Rohtang. The ice has becomes black and the place looks like a garbage dump. We just stayed there for couple of minutes. 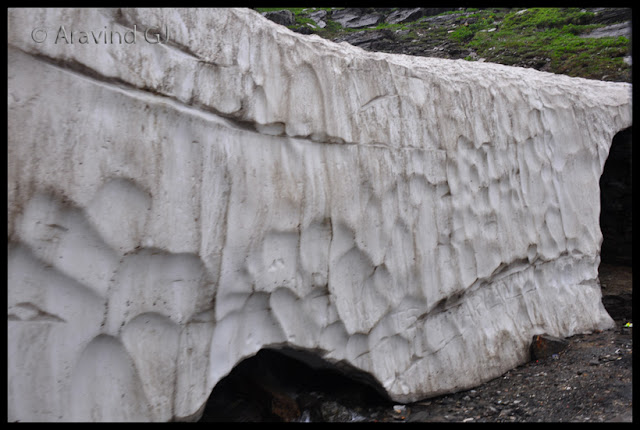 Traffic suddenly vanishes after Rohtang pass. The road continuously goes down with a series of switchbacks to reach to the level of Chandra River at Lahual. We reach a small village Koksar on the bank of Chandra River. The bus stops for sometime here for tea. All foreign tourists need to register themselves here. 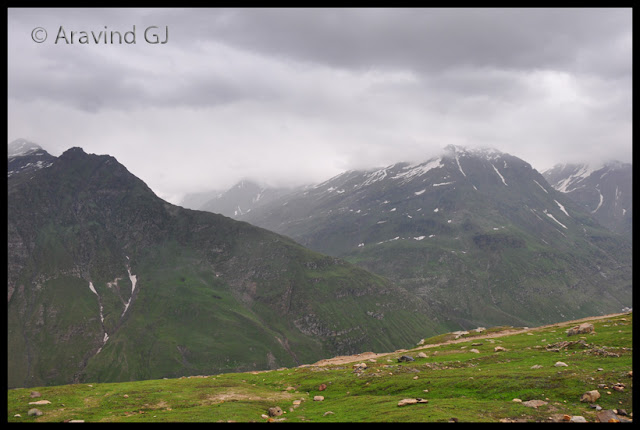 The road after Koksar was along Chandra River. On the way, we saw the site of Rohtang tunnel. This 9km tunnel once completed (Planned 2015) would make Manali-Leh an all weather road. This is an important project for army as Ladakh gets cut off completely from land routes in winter.
The drive along Chandra River ends near Tandi where it joins Bhaga River from Baralacha La. Tandi has the only fuel pump on this route. The next one is after 351km!!
We finally reach Keylong at 9PM. Our stay was at decent tents at Chandrabhaga hotel. Without much delay, dinner was consumed and we quickly headed to the tents for sleep. The next day promised to be long!!