Port Louis, the capital city of Mauritius is more seen as a commercial center than a tourist place. It is a crowded city on week days and slow moving traffic is a common sight. Things change dramatically on Sunday where the city looks deserted. Through parking is generally free in Mauritius, Port Louis is an exception. But parking on weekend and Sundays are free!! These factors made me to plan a visit to the city on Sunday. But Chaya felt that I deliberately planned to foil her shopping plans!!

We visited Port Louis while coming back from North Mauritius beaches. Our main idea was to visit Caudan waterfront. Having parked our car in the parking area, we roamed around the area. The shopping complexes were empty but restaurants were open. We had some snacks at an Indian restaurant.

For people interested in Hindi movies, this is a nice place as many Bollywood movies are shot in this area!!

There are few statues, namely the first prime minister Sir Seewoosagur Ramgoolam and few museums. The museums were closed on Sunday. A historical place that could be visited is Apravasi Ghat (Coolie ghat), which was the landing point for Indian laborers in 19th century.

An highlight of Coudan waterfront is umbrella street, where colorful umbrella’s were placed above the street. Chaya and Tanu were especially looking for this and were overjoyed!! 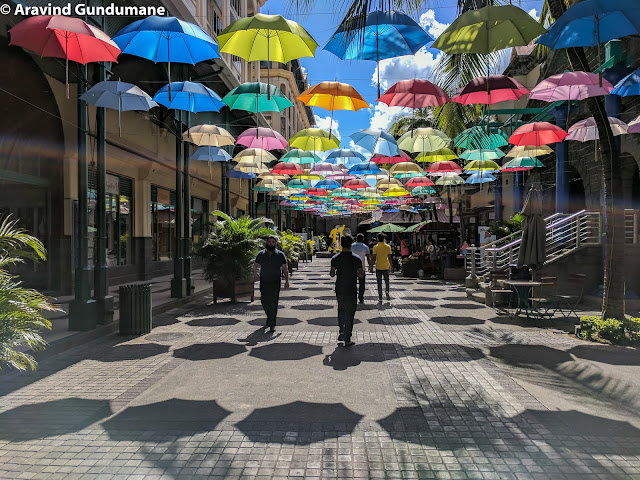 We spent couple of hours in the area and it was indeed a peaceful and relaxing place. If you are looking for shopping, visit during weekend. While I promised that we will be coming again during weekday, we felt that there was no need to shop in Mauritius and dropped the idea!!