We had a holiday for Varamahalakshmi Vratha in our Company. A trip was planned to different places of Uttara Kannada district. It was off season for most of the places in Uttara Kannada, but the advantage is that the places are devoid of tourists and would offer solitude.

We (I, Chitrai, Malli, Saran and Srini) started on the Thursday night. The 10:30PM bus to Sirsi finally left at 12 in the night. This is a regular problem now in Kempegowda bus stand. The buses are always delayed due to traffic jam near Majestic. But the journey was quite pleasant thanks to Volvo. We reached Sirsi at 7:30 in the morning. We had booked a taxi for the entire trip. Rooms at Hotel Panchavati were booked in Sirsi for the stay. The Hotel is outside the town and is very good.
Yana:

Our first destination was Yana. There are two routes to Yana, one going via Devimane ghat and the other near the Vaddi ghat. We took the latter route, which is the most used route to Yana by the people. The road passes through the villages of Hegade khatta, Devanalli and Mattikhatta. After some 36 kms, just before the Vaddi ghat is the deviation to Yana. Earlier, people had to stop here and walk for 3 kms to reach Yana. Now, there is a motor able road almost till Yana. Commercialization of Yana is almost complete. Our vehicle went for 2 kms and the final kilometer, we had to walk, since there was a monsoon stream flowing across the path. It was a simple walk, only hindrance was the leeches that were busy doing their “work”. 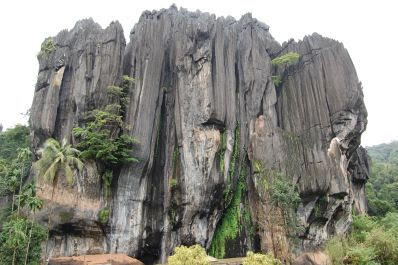 We were just walking and suddenly found the gargantuan rocks of Yana. They are just awesome and the photos here will not justify their beauty. Two main rocks, Bhairava Shikara and Mohini Shikara stand majestically surrounded by dense forests. There is also a Temple at the base of Bhairava Shikara. We did a “Pradakshina“of Bhairava Shikara. Since it was a weekday and thanks to leeches at this time of the year, there were no other visitors. The place was absolutely silent. We were just thinking how this place would be in a few years from now. Instead of booking the Panchavati Hotel in Sirsi, people may opt for “Rock view” resort in Yana. 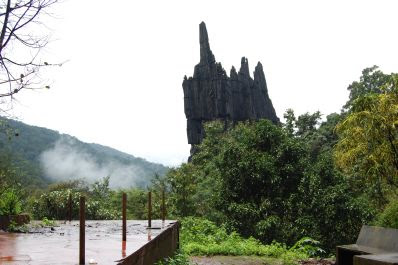 After Yana, we had a planned for series of Waterfalls. The first among them was Vibhooti falls. We went back to the Yana deviation and continued towards the Vaddi ghat. The road is very narrow one and rarely used by people. The road was similar to Valparai-Athirapally road. After getting down the ghat, is the village Mabage. Two kms on the mud road, we were at a gate. From here the falls is some 15 minutes walk. The entire path was infested with leeches. Srini and Chitrai were the most affected and returned back half way.

It is a two step falls and the water is absolutely white, due to the limestone and hence the name Vibhooti falls. A pool formed at the base of the falls provides a nice place for swimming and bathing. The rocks in the water are quite sharp and one has to be careful while getting down. 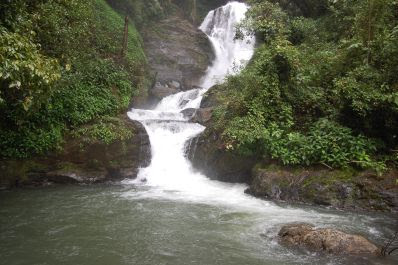 We returned back and had our packed food. I had heard of another falls called Vaddi falls. But the driver and local people told that Vibhooti falls is also called as Vaddi falls.

We had planned for Bennehole and Mattighatta falls, but approaching these falls during monsoon was difficult. The next falls in my mind was Shivaganga falls. We returned back to Sirsi and took the route to Jaddigadde. The falls is 38 kms from Sirsi. There is a good road to the falls. Forest department has also constructed a view point to watch the falls. 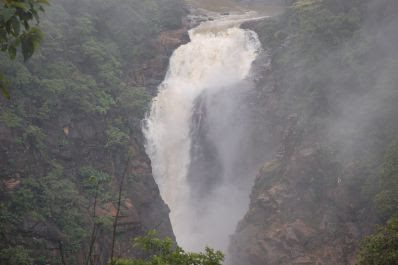 Getting down into the falls was difficult. There was a board mentioning about many people who did not come up after getting down into falls. The board warned about the crocodiles and swirls in the falls. I and Malli walked some distance down. The path narrowed and continuously went down. It was quite scary, we could only hear the falls, but could not see. The leeches were plenty and mercilessly attacked us. It was also getting dark and mist started to overlap on the hills. Better sense prevailed on us and we decided to return. It is a very nice falls to watch from far distance.

We went back to Sirsi and ended our day.

The day started with the visit to Sahasra Linga which is about 15 kms from Sirsi on Yellapur road. There are hundreds of Shiva Lingas on the Shalmala River. We could see a few of them and most of the other Lingas were inside water. 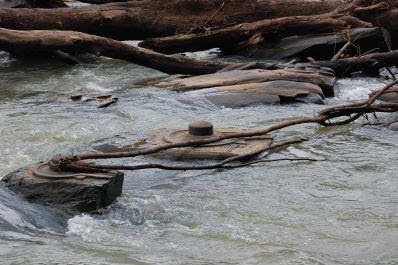 This falls is formed by the river Bedthi and is 650 ft in height. It is about 19 kms from Yellapur. The view is from the top on the opposite hill and the forest department has constructed several view points which offers 90 degree view of the falls. The water falls from two steps and is muddy. 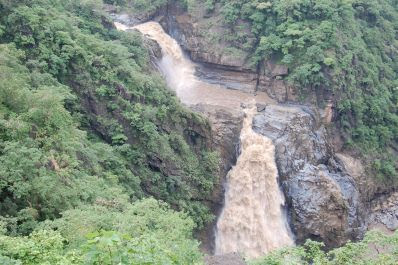 There is also a path to the bottom of the falls but again it dangerous to venture down during monsoon. We enjoyed the view from the top. The panoramic view of the Bedthi valley can also been from the view point. 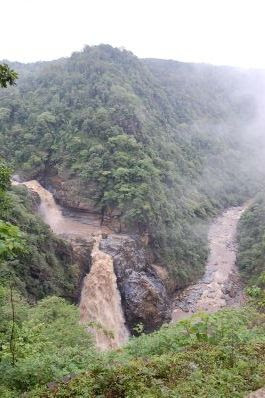 From one of the view points of Magod falls, one could spot this falls. It seemed to be a monsoon falls and looking the forest cover around that falls, I think there is no way to approach near the falls. Later I came to know that it is called as Majjige Hole falls. 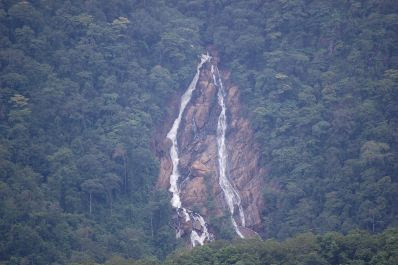 From Magod, we came to Yellapur and had our early lunch at Hotel Shanbag. The next destination was Sathoddi falls. It is about 30 kms from Yellapur. The road until the forest check post at Ganeshgudi is quite good. The last 7 kms to the falls is the mud road. After check post, the road is very narrow and passes through the dense forest. The road goes continuously down. One could see a vast expanse of Kodasalli dam back waters. Since the dam was built few years ago, we could see the submerged areca nut and coconut plantations. There is a harrowing story about the backwaters. 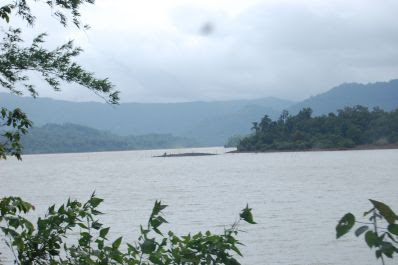 The families knew that their property would be submerged and few of them had also got some compensation. Even before they could move out, the callous KPCL thugs closed the dam gates and water level started to increase. The hapless villagers had to flee with whatever things they could carry. The utensils and many other items were later seen floating on the backwaters. I had heard this story from the people who had visited the falls at that time. Now, seeing the submerged places, my heart sank. I really could not enjoy the beauty of the nature. I do not know when the depredations of KPCL in the name of power generation on the innocent people would end.

The road was filled with mud and slush, but still the driver continued. We found some green snakes along the route. The road ends some half kilometer before the falls. There are a few houses where some people still stay. Their property lies just above the backwaters and have not received any compensation. With most of their neighbors migrated, they lead a very tough life. The nearest place where they could get a bus is 9 kms away and during monsoon their plight only increases.

We walked from the last house and in 10 minutes we were at the falls. We were bit scared on hearing that the place is full of Hamadryads (King cobras). After monsoon, this place might be full of tourists but currently we were the only people.

There is a view point built to watch the falls. Due to the increased water levels we could not get near the falls. We spent some time in the down stream playing in the water. Some of the monkeys spotted us and started moving towards our bags. We hurried back to stop the mischievous monkeys from stealing the items. 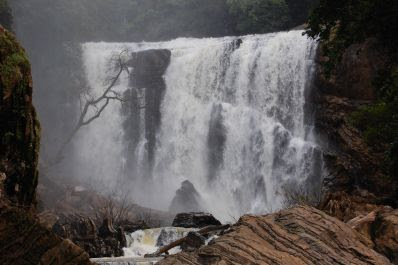 We came back to the last house. Here we heard a scary tale about the King cobra. A couple was staying on the other side of the backwater where the only approach is by the boat from this last house. A few months back, a King cobra has bitten the wife and she died in a few minutes. The husband had since left the place and moved somewhere near Dandeli. Also, a King cobra had come to this last house a few days ago and was killed by the people. The place was very scary. I have never heard of any survivors from King cobra bites. It is the only snake in India which attacks without provocation (Source, Kenneth Anderson novels). 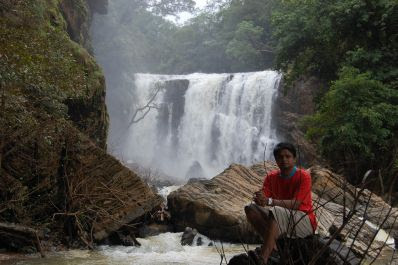 We started back and after covering some distance our vehicle got struck in the mud. Our worst fears had come true. We were in the middle of the forest and could not expect anybody to come for help. We spent another hour putting stones on the mud and trying to move the vehicle. Finally, much to the relief of all of us, the vehicle moved from the mud. We then came back to Yellapur without any incidents.

This falls is 12 kms from Yellapur on Yellapur – Ankola highway. It is at the start of Arebail ghat. It was already getting dark when we reached the Shirle cross on the highway. From here the narrow mud road continuously goes down. We did not want to take any risk by moving the vehicle down and also the driver was reluctant, since he had not ventured on this road before. We walked down for a while. Since it was getting dark and we did not like to think about climbing up the steep road in the dark. We could have made to Shirle falls had the vehicle not struck on the Sathoddi falls road. But that is way life moves.

We came back to Yellapur and then went to Hubli. We said good bye to the driver who was very kind throughout the journey. The Rani Chennamma train lived up to its reputation by arriving late to Bangalore by 1.5 hours.