I got up early on Friday at 4:30 in the morning and drove to Sankara’s house. Sankara was ready with his car for the trip to Charmadi ghat. Since we had a holiday on Friday, the idea was to see some places in Charmadi ghat. Convincing people for the trip/trek is always difficult, and finally I, Sankara, Venky and Venkat went for the trip.

I had only seen Charmadi from the bus/car while moving up or down the ghat. The details about the different places to visit was given by Rajesh Naik, who knows this area very well.

Even though we started at 5:30 in the morning, there was a huge traffic jam on ring road after BEL circle mainly due to the railway crossing. We took a detour to avoid this and reached Jalahalli cross through HMT. Breakfast was at Bellur cross. After that, I took the mantle of driving from Sankara. We reached Kottigehara without any incidents at 11:30. The lunch was packed at a hotel in Kottigehara.

Charmadi ghat starts after Kottigehara. Three km from Kottigehara is a guesthouse “Malaya Marutha” built by forest department. It is on a hill and from there one can have a panoramic view of the Charmadi ghat. Permission to stay there has to be obtained from Forest Office, Mudigere. The caretaker of the guesthouse told that it is easy to get permission for stay and one can also get it from Kottigehara check post. 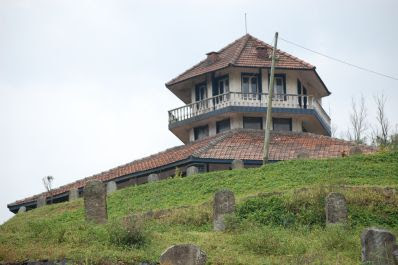 The first place in our list was Alekan falls. It is just next to the road and is the easiest place to visit in Charmadi ghat. The falls is 4 km from Kottigehara (1 km from Malaya Marutha guest house). There is a bus stop “Alekan Horatti”. The falls is behind the bus stop. To see the falls, there is a narrow way down just next to the board mentioning about the bridge. Due to the long monsoon this year, there was still good amount of water in the falls. The other place we visited was Bidurthala village. Actually, we wanted to go to Kodekallu, one of the high hills in Charmadi. There is a bus stop 4 km from Alekan falls. Next to the bus stop, there is a mud road going up the hill. We took that path and started climbing. One can see the roads of Charmadi ghat while climbing. The weather was cloudy; else we could have got a nice view of the surrounding places. 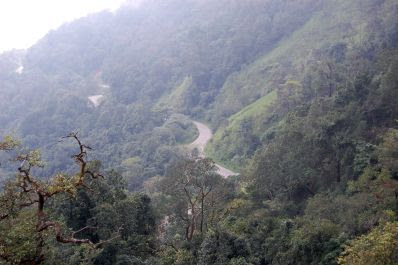 There was one place where the path split into two. The path to the left ended in a landslide after some time. We then came back and took the right one. After about 30 minutes of climbing we reached a point where the path split into four!! As we were thinking what should be done next, I found a person who was grazing cows. His name was Manjunatha, from Bidurthala village. He said that the path to the right goes to Alekan Horatti, the two paths in the middle to Bidurthala village and the left one to Kodekallu. He also said that the Children in the village can show us the path to the peak, but said that there was no use of going to Kodekallu, as it was misty and the visibility was reduced to a few feet. He was right and Kodekallu had to be reserved for the future trek. We then went to Bidurthala village; five minutes walk from that junction. It was amazing to see a flat land after climbing the hill. The people of the village were very friendly and I liked the village very much. It is wonderful place to camp in the night and enjoy the isolation. 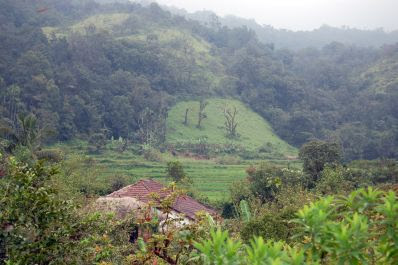 It started raining and we hurriedly got down the hill to reach the road. We had not taken any umbrella or raincoat. Luckily it was not a downpour.
We finished our packed lunch at the bus stop. Some monkeys in the forest could smell the food and came near us. But since they were forest monkeys, they had fear about human being and were only watching us eating. They were finally rewarded with some food and fruits. 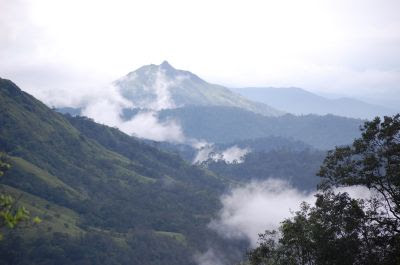 After lunch, we drove down the ghat. The traffic was blocked at the hairpin bends. But it was not a major one, and in about 30 minutes, the road was cleared. We reached Kakkinje village, which is at the base of the Charmadi ghat at 4:15PM. Our plan was to visit Dondole falls that was some 15 km from Kakkinje. Since the road was not good for car, we decided to park the car in the village and take a jeep to the falls. But the local people told that we were late and could not see the falls before sunset. It had already started to rain and we decided to visit Dondole on the next day (that did not happen!!) and went to Dharmasthala. We got a decent room in Saketha. We then visited the temple and had dinner at the temple. The day was ended day quite early at 9PM.
Next: Charmadi Day two - Anadka and Ermayee falls