A painful journey through ghats

I visit the holy places of Dharmasthala and Kukke Subramanya once in a year as a pilgrim. This time I traveled alone to these places last Sunday. Tickets were booked to Dharmasthala on an overnight bus from Bangalore.
Things seemed to be normal as the bus pulled off from Majestic bus stand on time. Since the Shiradi ghat road was blocked, the driver took the other route via Charmadi ghat. The backbreaking journey started from Mudigere. The virtually non-existent road on Mudigere-Kottigehara stretch made sure that I don’t sleep. Bus stopped just before the dawn somewhere in Charmadi ghat and the driver said the road is blocked. Some people started murmuring "ಯಾಕಪ್ಪ ಕಾಡಲ್ಲೆಲ್ಲ ನಿಲ್ಲಿಸ್ತಾರೆ?“ (Why is he stopping in forests?). The watch showed 5:30AM. Within no time, vehicles piled up. Slowly people started getting down. I walked for some distance to look where the road is blocked. Even after walking for a kilometer, I could only see the vehicles on our side of the road. The roadblock was somewhere down the ghat. I remembered that I had left my bag with my SLR camera in the bus and hastily returned back. The Charmadi ghat is a very steep and narrow ghat and is not designed for heavy vehicles. I could see some huge sleeper buses and the lorries. Clearly, the problem of the Shiradi ghat has spilled over to other ghat roads. Driver told that this is a regular problem for the last two years in the ghats since Shiradi ghat, the arterial road between Bangalore and Mangalore is damaged due to negligence from the authorities. 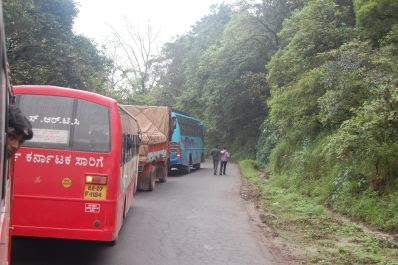 Some people had already started brushing at a nearby stream while a few were looking at the suitable spot for morning activities. One guy who had gone into the green cover returned back and started scratching his legs only to find out some 5-10 leeches on his legs. A dance session was started by that chap and was desperately removing those suckers. He then rushed into the bus!! I did not see him on the roads again. 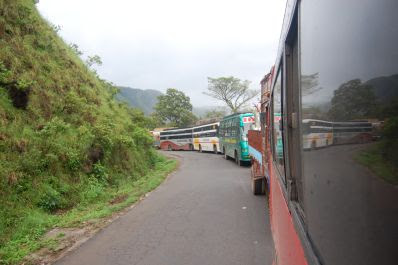 It might even be noon by the time the traffic gets cleared, driver said. Nothing could be done now; it was evident that my plans had gone for a toss. With nothing else to do, II started enjoying the forest and a light drizzle added to the feeling.

One of the things that should be appreciated was the discipline followed by the truck and the bus drivers. The vehicles were always on their side of the road, unlike in Bangalore where people rush from all sides. This was only violated by a couple of cars with Bangalore registration. 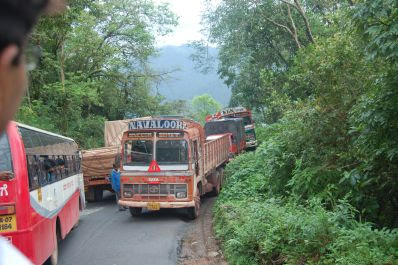 At about eight, things started moving. Again here some people volunteered by guiding the vehicles to clear the block. The vehicles moving down the ghat started while the drivers of the vehicle waited patiently so that the other side gets cleared.

The saddest part was an ambulance that got struck in the traffic jam. But it was given a priority and allowed to overtake other vehicles.
Finally, the bus moved down the ghat!! 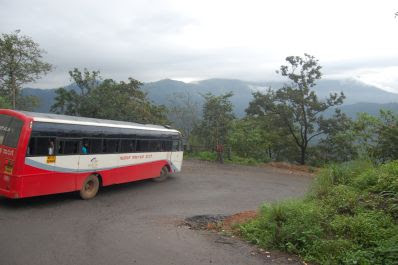 Some bad roads I traveled on that day:

Mudigere – Kottigehara (16 kms): Practically, there is no road!! But this is major road connecting Dharmastala to central and North Karnataka regions.

Sakleshpur – Mangalore (150kms): Ghat road is in a hopeless condition. Even after the ghat, there is a very little improvement on the road condition.

Gundya – Kukke Subramanya (20kms): I have never seen this road in good condition!!

Kukke Subramanya – Uppinangadi (60kms): Worst road that made sure that I miss one of my destinations, Kateel.