Prologue:
When YHAI announced the trek to Dudhsagar falls, I suggested Chandru, YHAI coordinator to include Vajra Poha falls near Khanapur. I checked in the web and with Rajesh Naik, an expert about the waterfalls in Karnataka and passed all the information to Chandru asking him to get permission from Khanapur RFO. But Khanapur RFO told that the falls comes under Nagaragali RFO and asked to contact them. Chandru then contacted Nagaragali RFO and with great difficulty managed to get permission to trek to the falls and stay at Nagaragali forest guest house. Things looked great but actually we had goofed up!!

The trek:
We started from Castle Rock on Tempo Traveler after returning from Dudhsagar. Our stay was arranged at Nagaragali forest guest house. None of us knew where the place was. We came to Ramnagar near Londa and asked for directions. Local informed us that Nagaragali was 15 kms and directed us to take Dharwad route. As we were moving towards Nagaragali, I had a feeling that something had gone amiss. We were moving away from Khanapur and I was wondering how we can connect to Vajra Poha from Nagaragali. At Nagaragali guest house, I was even more surprised when the guard Ratnakar mentioned that the falls was just 4kms. Upon further enquiry, we came to know that the falls near Khanapur and the one near Nagaragali are totally different but share the same name Vajra Poha!! It looked like Khanapur RFO was not even aware of the falls nearby. I and Chandru were disappointed, but the silver lining was that we would be seeing a new falls that we were not even aware of.

Nagaragali guest house is in an isolated place surrounded by forests. The guest house is huge and lavish in style with fully furnished rooms and halls. Per day rent is just Rs 20/- for entire gang!! But at the same time, it is mostly used by higher forest Officials, politicians and Babus and is very difficult for general public to book this place. 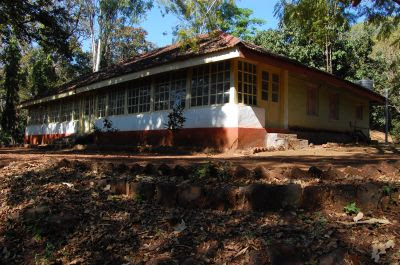 Guards mentioned that forests surrounding the guest house were teeming with wild life. So, some of us went for a walk early morning. But we were unfortunate as the only wildlife we found was a jungle fowl, although we saw excreta of Sloth Bear, wild dog and elephant.

After breakfast, we started towards the falls. The forests were dense with teak trees abundant but the trek was not very tough. Since the falls comes under the reserved forest, not may people visit this place. Our guide Maruthi told that there was a proposal to build a road to the falls but it was dropped. Good that it got scrapped; it would have only helped poachers and people without basic sense who come with big families and group with bucket load of food to dirty the place.

After about 75 minutes of trekking, we reached the falls. The falls is about 60-70 ft height. I liked the silence of the place. The pool formed at the base of the falls formed an ideal place to get into water. It was called as Vajra Poha or Vajra falls, guide told. Well, there are already falls with those names and this would create confusion and so I decided to name it as Nagaragali falls!! 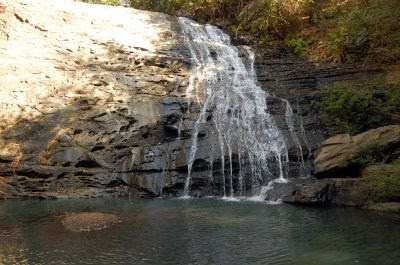 While returning, we went to top of the falls and took the tougher route. It took two hours to return to guest house. After lunch, we set out for our return journey to Bangalore. 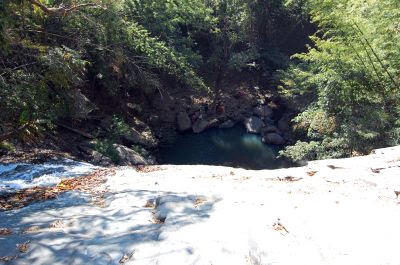 Epilogue:
Permission has to be obtained from Nagaragali RFO to trek to this falls. Nagaragali is 45 kms from Dharwad on Dharwad-Goa route. Even though it is a State Highway, this road is hopeless and only safe for bigger vehicles and not at all suitable for two wheelers and cars.