I had heard about this route during my previous trip to Parambikulam. That trip was a brief one; we just went to Safari and returned back due to lack of time. But I had decided to visit this place again for exiting experiences.

About the Tramway:
The beginning of the 20th century brought large scale destructions for Parambikulam. The forests were famous for its Teak trees. A Tram way was constructed by British in 1901 from Chalakudy to Parambikulam to transport logs from Parambikulam forests. It was 49.5 miles and it used to take 9 hours for the tram to cover this distance. The next 50 years was a time of mindless destructions of the forests. The forests were replaced by teak plantations, even today there are 9,000 hectares of teak plantations in Parambikulam. At one point of time, the forests were destroyed just to keep the tram running on profit.

Finally, in 1951, considering the losses, it was decided to discontinue the tram way. Later Parambikulam was declared as a wildlife sanctuary. Today, it is one of the best managed reserves in India. No more teak trees are planted now.

Nevertheless, the tram way was an Engineering marvel at that time and passed through the dense forests crossing many rivers. Dr. Salim Ali, a renowned Ornithologist had found more than 100 species of birds when he traveled on this Tram way. He then stayed for 2 years at Parambikulam studying about the birds in that area.

Now, the forest department in Parambikulam conducts treks to some part of this tram way route. The rails don’t exist now as it is converted to a Jeep track for patrolling forests, although reminiscent of the bridges and rails can be seen at some places.

The trek:
We were expected to leave on a Tempo Traveller from Bengaluru at 6:45PM on Friday. It was delayed and the journey started only at 9 in the night. We passed through Hosur, Dharmapuri, Mettur, Coimbatore and Pollachi. At 7 in the morning, we were at Sethumadi check post (23kms from Pollachi). Even though Parambikulam is in Kerala, the only entrance it has for public is from Tamilnadu through Anamalai Wildlife sanctuary. We paid all the necessary fees to get into the sanctuary. 12kms from Sethumadi was Top Slip. The old guy at the check post here demands bribe without any shame to allow the vehicle pass through the check post.

Couple of kms from Top slip is the Kerala border which doubles as entrance for Parambikulam wildlife reserve. Here we again paid the necessary fees to proceed further. There is another check post couple of kms further. It is here we registered for the trek and were assigned the guides. The Officers were very helpful and gave us all the necessary introductions for the trek.

The starting point of the trek was at Parambikulam Dam, 19kms from check post. As we passed through, we came across many peacocks and spotted deer. It was promising and indicated of the things that were in store for the rest of the day. People were very impressed about the sanctuary. It was so peaceful and scenic. 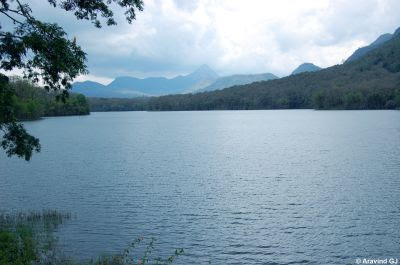 We reached Parambikulam dam and finished breakfast at a Hotel there. 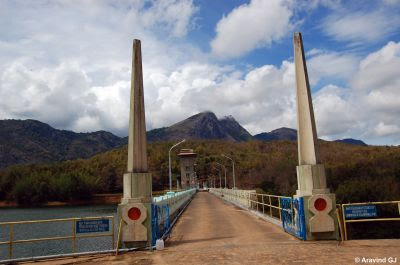 The trek started at 10:30AM. The Parambikulam tram way station stands submerged under the backwaters of Parambikulam Dam. We were given instructions by the guide before the start of the trek. We got down from the dam and started walking. We passed through a tribal colony and entered into the forest. Parambikulam (or Chalakudy ??) River was at our left side which would be our constant companion throughout the trek. 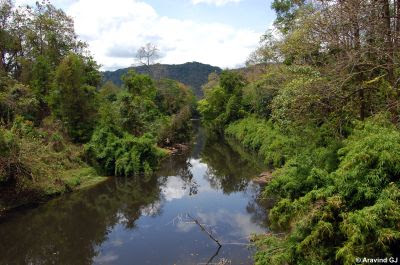 Things started after walking couple of kms into the forest. Our guide found an elephant herd far away in the River and said that we would be crossing their path. People wearing white shirts and caps were asked to change them as elephants react aggressively for white colour. We walked very slowly without making any sorts of sound. Within few minutes, we were at a place where the herd was expected to cross. Elephants smelled us and there was a commotion in the herd. I was excited on seeing these huge creatures at this close distance. 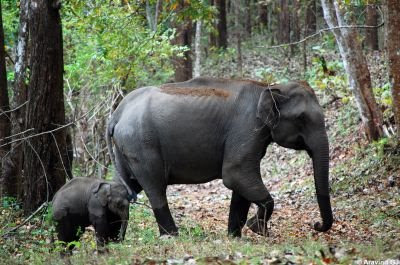 Although I had seen these jumbos in wild, I was at a safe position sitting on the vehicle. Here we were on foot and at the mercy of these giants. We were stunned on seeing them crossing just a few feet from us. There were few calves and the last group gave some anxious moments. The group stopped on the path and one of them started lifting its leg and trumpeted. Situation was tense and we were anxiously waiting for their next course of action. Clearly they were angry with us for strolling into their space. But they could not gain enough courage for attack and decided to flee!! All ended well and we were immensely happy with this wild encounter. Luck was clearly on our side. 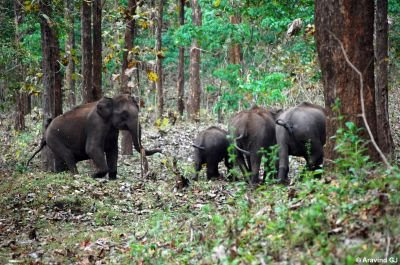 After relaxing for some time, we started our walk again. Guide told that sometimes tigers would cool themselves in Chalakudy River and our hopes were high. We were constantly looking into the River for any wild actions. It was here we met another elephant family. It was sudden and both of us were surprised. Before we could react, they ran away!! Only few of us who were walking in the front could see this. We also sighted spotted deer and Sambars, but being extremely sensitive animals, they just vanished upon seeing us. 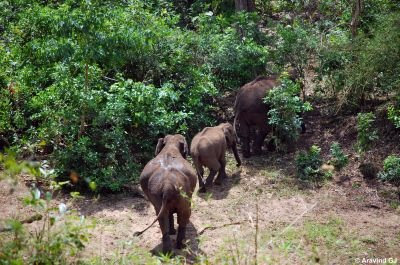 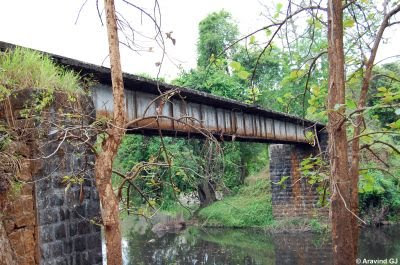 After lunch and some rest, we continued our journey. The dry deciduous forest gradually changed to the dense evergreen forests. It was a paradise for bird lovers. We spotted Malabar grey Hornbills and Great pied hornbills. Even the rare Malabar Trojan was sighted. It was no surprise that Dr. Salim Ali stayed here for two years to study the birds.

It was then the turn of wild dogs into action. We saw them on open grassland next to the road. A pack of eight wild dogs were on hunt. They looked least bothered about our presence and were staring at us for a long time. Then they vanished under the thick undergrowth.

At about 5 in the evening, we reached our destination of the day, the anti poaching camp at Muthuvarachal. Couple of tribal families stay here. We were given tea on arrival. It was without milk but still tasted great. We spent some time playing in the river that was flowing in front of the camp. Our halting place was still half a mile away from the main road. It was just a small room with asbestos roof in middle of the jungle. It was meant for 5 people but as usual with YHAI, we were 15 of us and had to stuff ourselves inside the room. Sleeping in open was not an option here as it was expected to rain during night. There was no electricity in the room. We had our early dinner and hit the beds at 8:30 itself.

Morning, we got up at 5:30AM and set out for a walk. We continued further on the tramway. Here the jungles were extremely dense and we could see the pugmarks of a cat and footprints of its prey all along the route. It looked like a leopard had nice time in the night. 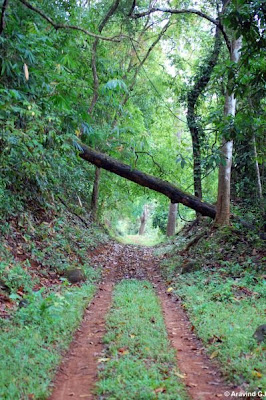 We wanted to go till the end of Parambikulam section of the tramway. But the guide was not enthusiastic about it. The track continues till Athirapalli waterfalls which is another 35 kms. We returned back to our camp at 8:15AM. After breakfast, we set for our return journey on the same route. This journey was uneventful, and by 12 in the noon, we were at the tribal colony of Kuriakutty. Guide had asked our driver to bring the Tempo traveller to this point. After lunch, we boarded the vehicle for Parambikulam Dam. We traveled on the Patrol road to the Dam. It was followed by a visit to Kannimara, largest teak tree in the world. Evening, we departed out of Parambikulam. Driver took Satylamangala route from Coimbatore, a road less frequently used by trucks. We were back in Bengaluru at 4:30 on Monday morning. 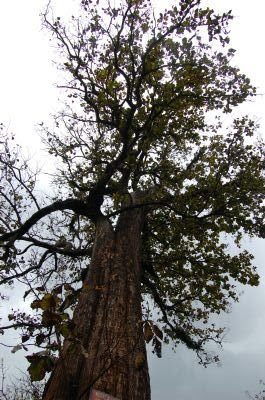 Once you enter Parambikulam, very less visitors are seen. The reason is that only 30 vehicles are allowed inside the sanctuary per day. For a day tourist, activities are very limited. But at the same time, Parambikulam offers different packages for interested people in wildlife. Even though the tramway route is 40 kms, there is very little change in elevation. More than the trek, it is a long walk.

For a nature lover, I would suggest to go for tramway trek before

More pictures of the trek can be viewed here.