9 August 2008
Continued from Monsoon Mania-1
From Yelaneeru, we started our journey on Kalasa – Mangalore road. The forest department check post after Samse issues entry passes. One has to pass the check post at the other end by 2 hours. On the way, we passed through the Kuduremukha Township. The township posed a deserted look, may be because of rains or most of the inhabitants have moved out. I was wondering about the future of this township which was carved inside the National forest for KIOCL employees.

After Kuduremukha Township, one can see the mountains chopped by the mining on the left side. A little later is the deviation to the Lakya Dam. The Dam is constructed to collect the waste from the mining operations so that it will not flow downstream. In addition to mining, lot of forest land was destroyed to collect the waste. This dam is at the backdrop of beautiful shola mountains.

The entry timings are restricted in the Dam (Evening 4:30 – 5:30PM on normal days and 9:30AM to 5:30PM on Sundays). Since we were quite early, the forest guard refused to allow us inside. It was raining and completely covered by mist. I and Sankara had seen this place before and were explaining to Malli how great it would look during post monsoon months, the cloud cover on the surrounding mountains cleared. We asked again with the forest guard to let us inside for a few minutes. Looking at the enthusiasm, he let us go on the Dam.

The bad part is that the photography was prohibited on the Dam. Last time, I had a small digital camera and I took few snaps without the knowledge of anyone. This time I had an SLR camera and it was not possible to evade it from forest guard. 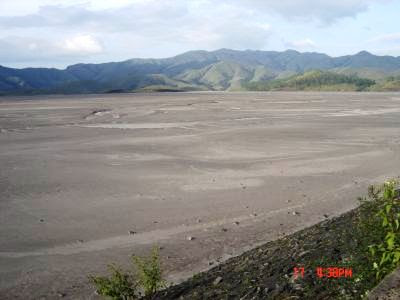 I pitied the forest guard when he asked for a newspaper of the day while we started to return back from Lakya Dam. It is a tough life for him in this heavy rain with no other means of entertainment.

It was a day of heavy rains and mist. I was behind the steering and the drive was fantastic. Never before I had an experience of driving in the ghats during rains.

Kadambi falls is seen from the road itself. It is great to see how rains change the way the falls look. 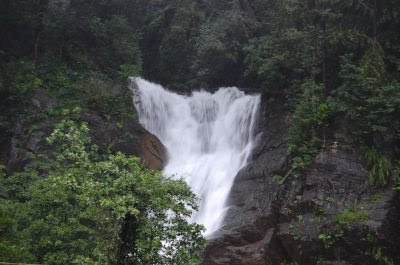 We were at the gates of Hanuman Gundi falls at 4:30PM. The forest guards were getting ready to close the gates and leave. They had to go to SK border and catch a bus to their village. We offered them to drop them at SK border it they allow us to see the falls for which they happily agreed. One must appreciate Forest Department for the way they are maintaining this falls. They charge an entry fee of Rs 20/- per head but have constructed nice concrete steps to the base of the falls and also railing to hold near the falls. 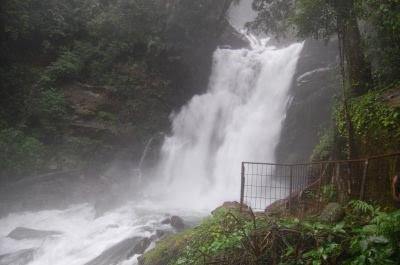 The falls was in full flow and with rains lashing heavily, it was a tough task to even take the camera out and click a snap. What a place!! 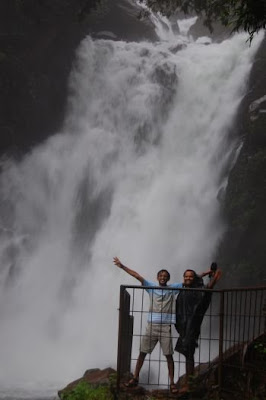 After dropping forest guards at SK border, we continued our journey towards Karkala. On the way, somewhere in the middle of the ghat, there was an accident between a car and lorry. The car had rammed into a lorry. The car was completely damaged but luckily there were no deaths. Since we had some space in our vehicle, we took two of the injured to Karkala and admitted them to a hospital there. It was then hunt for the place to stay. Locals referred to Hotel Prakash, and we promptly checked-into the hotel.

What an eventful day it was!!!!