This is one more waterfalls that I came to know from Rajesh Naik. Although a small waterfall, it is one of the “easy to approach” falls in that area.

From Karkala, we went to Mala check-post which marks the beginning of Kuduremukha ghat. I had called up Rajesh Naik the previous day to get directions about this falls. We went for couple of kms where the tar road ends. After taking directions from villagers, we started walking on the mud road. Another 30 minutes, we were at the last house of Joshi. There was no one in the house as they had gone outside for a trip. A person looking after the house agreed to guide us to the falls. After walking for 5 minutes in the plantation and another 10 minutes in the forest we reached the falls. 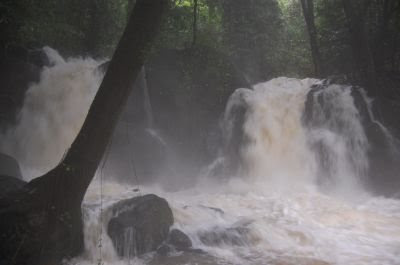 It was the peak of monsoon season and water was gushing everywhere. This is actually the second stage of the falls. To reach the first stage, one has to trek further for about 30 minutes inside forests. That can be done only post monsoon season. Even villagers would not like to enter into forests during monsoon. The person who guided us to the falls told that it was not a famous spot and not many people come to visit the falls. I was happy on hearing it!! 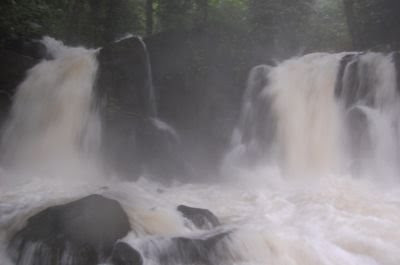 The return journey:
From Mala, we went to Ujire via Naravi, Guruvayanakere and Belthangadi. Here we had an option of going back via scenic Charmadi ghat or truck infested Shiradi ghat. We choose the former route. (An update: Kottigehara – Mudigere route is very good now!!) It was a day of heavy rains. There were land slides everywhere. 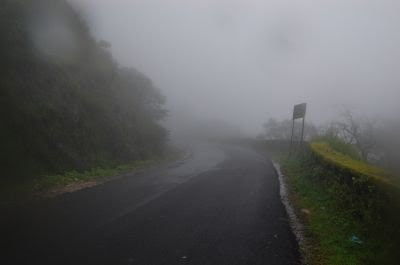 Although the road was good, there were very bad stretches at hair pin bends. Buses had a tough time and had to take reverse many time to negotiate some hairpin bends. 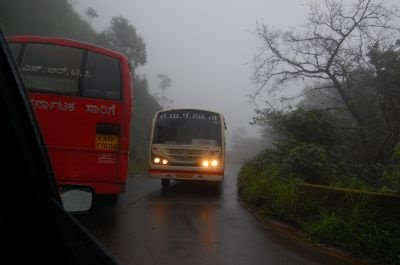 At ninth mile stop in Charmadi ghat, we parked our vehicle on the road side and started walking on the mud road. Our aim was to visit a falls near that place. After walking for a km in the forest, we found few villagers. It was already 3PM and they told that it would not be possible to see the falls and return before sunset. We also had to drive back to Bengaluru. So, we decided to drop visit to the falls and return back. 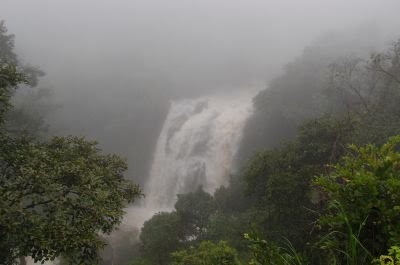 On the way, we saw Alekhan falls. I had seen that falls in October last year, but now the scene at the falls was totally different. I just managed to take a few snaps there. What a rainy day it was!! Kottigehara recorded the maximum rainfall that day (28 cm) in Karnataka. 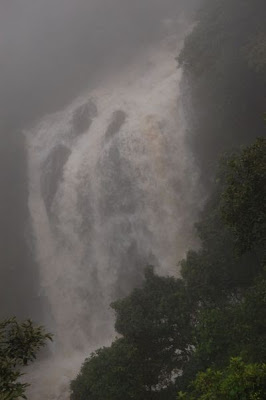 After Kottigehara, it was an uneventful drive till Bengaluru.

More photos of Monsoon mania can be seen here.