During my visit to my native place few of us decided to visit Bennehole falls. I, my brother, my Uncle, cousins Anujith and Anusha and neighbour Raghu went for this falls.

We started from my native place after breakfast. At about 9:45AM we were at the place on the highway where a board indicated the direction to the falls. It was a jeep route; still I drove my car on that road.

After about half a km, there was a deviation. Both the roads were equally wide and there was confusion about the correct route. We did some strange calculation, and took the road towards right. Another half a km, road became worse. Since it would be too much for my car to handle, I decided to park the car and walk remaining distance.

As we started walking, there was another deviation after about 500mts. Since this deviation was from the same direction as we came, we did not worry much. After another few minutes of walking, we were at one more deviation. What the hell! I thought. I do not know why so many roads are required in the forest. All along this journey, we did not see any humans on the road!!

Somebody (Hopeless fellow!!) had marked an arrow for the road that went straight. I thought that some trekker with good intentions had marked the way for waterfalls (how naïve!!). So, we took that path. After few minutes, the path ended in an open space with a small hill. We did one complete circle of the hill but could not find any path. So, we came back again to the deviation point and took the road to the left.

As we moved along this path, we found few deviations to our left but we just ignored and continued on the main path. We were bit anxious whether we were following the right path or not. There was a deviation to the left and more importantly was a board directing to a Temple and village. 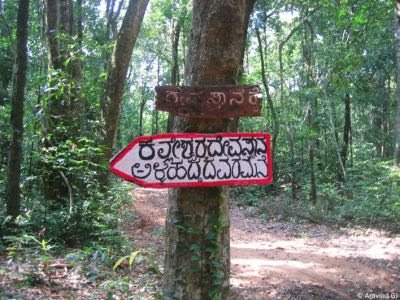 We thought that there would be some people in the Temple to at least tell us whether we were on the right track or not. After about 5 minutes of walking, I was at a gate. There was a Temple next to the gate and a small house in mid of the field. At such places, my main worry is the dogs and I do not like dogs. The moment I thought about dogs, I heard their barking. I waited for others to join me before entering the field. After confirming that the dogs were tied and not free, we went to the house. Luckily, there was a person in the house. He told that the route we followed was correct and if we continued on the main path, there would be a board indicating the direction of the falls. Feeling relieved, we thanked him for the information and returned back to join the main path. After about a km, we reached the deviation. Here the board indicated that straight road goes to Hosur village and path to the right would take to the falls. We promptly followed the directions and continued. 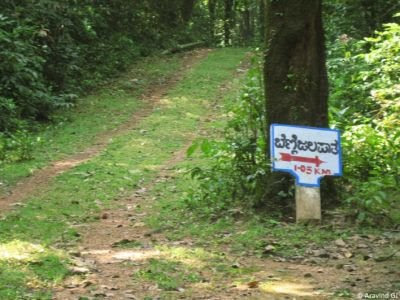 After walking for another 15 minutes, we were at the end of Jeep track. From here was a narrow path which went down. We walked down for 10 minutes and we could see the first glimpse of the falls. 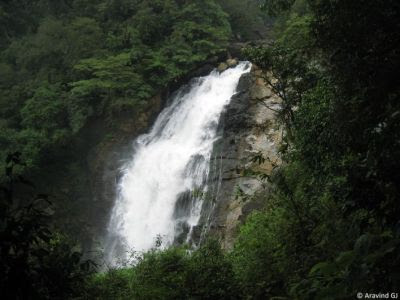 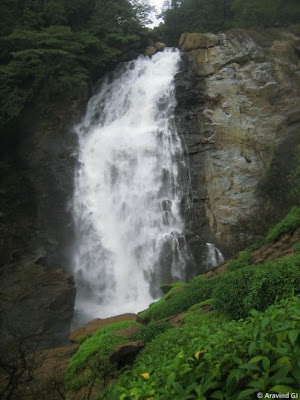 The falls looked majestic, and there was decent amount of water. I tried to get down further, but the boulders were very slippery and there was no support to hold on. With Basavana Baayi incident fresh in mind, I did not wanted to take any risks (Later, from when we were at the Hotel in Bandal, a person told that there is a way to get down the falls). The river then flows down the valley and finally joins Aganashini River. 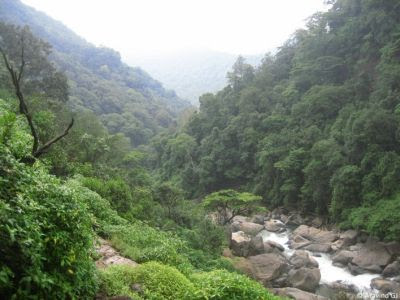 Actually, from the main road, it would take about 75-90 minutes to reach the falls provided not lost in the labyrinth of routes. If one has a high ground clearance vehicle or a bike, he needs to walk just 15 minutes to view the falls.

More photos of this falls can be seen here.