25th October 2009
Continued from Mandu.
We got up quite early and were ready to depart from Mandu. As expected, our driver was asleep in the car. I had to wake him up and ask him to get ready as fast as possible. Probably, he might have thought that a family with small kid may not be able to start early!!

The driver took a short cut to Maheshwar. It passed through a ghat road with absolutely no traffic followed by a village road. After about an hour, we reached the town Dhamnod where we had our breakfast on a road side hotel. The Poha (Avalakki in Kannada) tasted simply great!!

Fifteen minutes from Dhamnod, we were at Maheshwar. 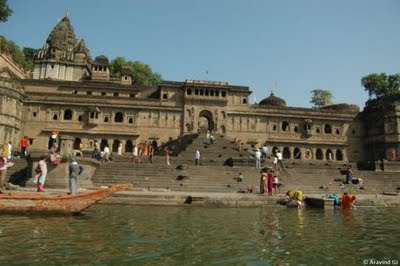 We first went to the Palace which was built by Holkars. It is a small Palace which contains some of the things that were used by Ahilayabai, Queen of the Malwa kingdom. More information on Ahilayabai can be seen at here.

Just next to the Palace one can enjoy the nice view of the Narmada River. 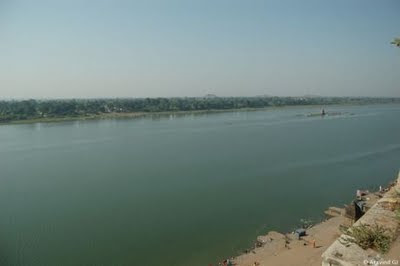 We got down the steps to reach the Narmada ghat. A very nice place with Narmada River with Temples on the side. 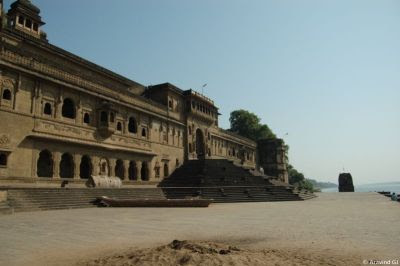 We took a boat ride which gave us a nice view of the ghat and surrounding areas. 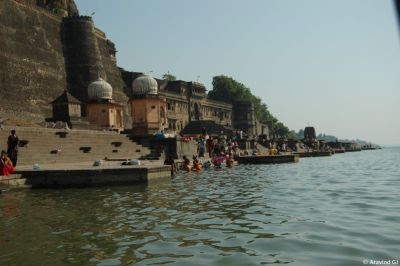 The boat also took us to the Baneshwar Temple, which is in the middle of the Narmada River. Maheshwar is famous for its handlooms (Especially Maheshwari sarees). While I waited outside, my wife went to have a look at the sarees!!

We spend about 90 minutes in Maheshwar, and then set out for our next destination Omkareshwar.